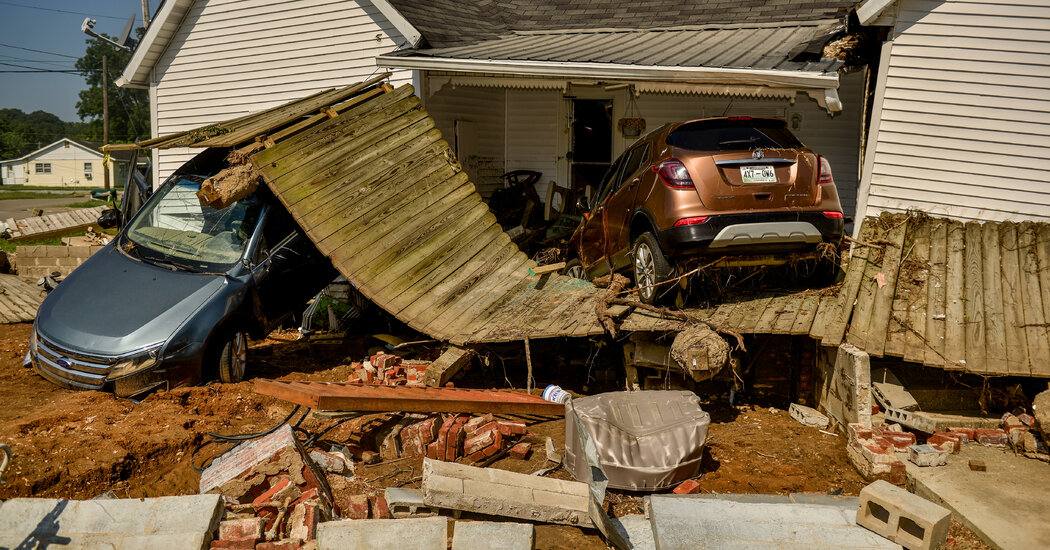 The floods, which killed at least 20 people in Tennessee last weekend, came with shocking speed and force – apparently a case study of the difficulty of protecting people from explosive rains when climate change worsens.

A closer look at events in the days, years, and even decades before the storm reveals a number of government decisions – where and how to build, when to update flood maps, whether to join the federal flood insurance program, and how to warn about them dangerous floods – made residents more exposed to flooding than they needed to be.

Record rainfall of more than three inches per hour at times swelled rivers and streams in Middle Tennessee, destroyed homes, disrupted electricity and cellular services, and washed away bridges. Among the dead are 7-month-old twins, a 15-year-old girl and an Army veteran who died after helping his wife and daughter escape.

It is impossible to say whether a single action could have prevented these deaths, especially given the severity of the floods. But interviews with climate and disaster experts and a review of state and federal data show how governments have been slow to adapt to the growing threats and fail to take steps that, together, could have reduced the damage.

“These extreme weather events will become more intense and frequent,” said Hiba Baroud, professor of civil and environmental engineering at Vanderbilt University in Nashville, who specializes in resilience. “We need to be more proactive and think about ways to prevent or at least mitigate the effects of these events.”

The story of the disaster in Humphreys County, the hardest-hit area in the state, arguably begins in the late 1970s when the federal government began offering a deal to communities across the country: if they agreed to take basic precautions to avoid the damage by flooding, the government would allow people in these communities to take out publicly subsidized flood insurance.

Most cities and counties said yes. But not all of them. Humphreys County declined to participate, according to federal records. Likewise, neighboring Houston County, which was also affected over the weekend. (Some cities in these counties, such as Waverly, which was hardest hit by the flooding, are participating in the program.)

A Humphreys County spokeswoman said officials were unavailable for comment. But in general, communities that choose to stay out of the flood insurance program usually do so out of an aversion to building restrictions, according to Roy Wright, who led the program through 2018.

Failure to participate in the flood insurance program harms communities in many ways, said Chad Berginnis, executive director of the Association of State Floodplain Managers. That means people cannot get flood insurance, making it difficult to rebuild after a flood. And it prevents people from receiving some types of disaster relief from the Federal Office for Disaster Protection.

When officials in Humphreys County turned down the federal government’s offer for flood insurance, they shaped the county’s future in a different way: by refusing to accept housing codes.

These regulations regulate the way houses must be built to better withstand natural disasters and other hazards. For example, in Nashville, where a flood disaster in 2010 displaced thousands of people, the first floor of new homes must be built at least three feet above the expected height of a major flood, one of the toughest demands in the country.

But Humphreys County, despite being just 70 miles west of Nashville and facing a similar flash flood threat, has no building codes, according to state data. Neither does Houston County, along with about three dozen other counties in Tennessee. (As with flood insurance, some cities in these counties have their own codes.)

This difference is possible because Tennessee lawmakers chose not to impose rules on local governments. While most states pass building codes and make them mandatory for all of their cities and counties, Tennessee lets local governments decide whether to follow state rules, or have their own rules, or none at all.

“Any type of standard or code is there to protect the public,” said Norma Jean Mattei, former president of the American Society of Civil Engineers and professor at the University of New Orleans. “It’s really all about public safety.”

In Houston County, Mayor James Bridges said he would like building codes. But he said there wasn’t enough tax revenue to pay employees to manage and enforce these rules.

“With 8,000 employees and a very small tax base, we just don’t have the money to have all of these different departments that they have in bigger cities,” said Bridges. “We have so many other needs.”

Because houses were being built in Humphreys County with no building codes, the county’s ability to prepare for flooding was also hampered by a decision in Washington.

FEMA creates maps showing which areas are at risk from flooding so homeowners, builders and local officials can make informed decisions about where and how homes are built. According to federal law, the authority must review its flood maps at least every five years and update them if necessary.

But the map for Humphreys County has not been updated since 2009, according to FEMA data. Hickman County, which is southeast of Humphreys and also flooded, hasn’t updated its map since 2008.

Aside from the fact that the maps were out of date, the methodology used by these FEMA maps underestimated the level of flood risk the region is exposed to, according to calculations by the First Street Foundation, a group of academics and experts who most recently published their own estimates Year Realtor.com uses to educate homebuyers about flood risks.

FEMA’s flood maps show that only 781 lots in Humphreys County are at risk from a so-called 100-year flood, or 6.2 percent of all lots. First Street estimates that number is more than three times that.

In other counties that were affected by the floods last weekend, the discrepancy is even greater. The number of homes in Hickman County at risk of flooding is five times what it is on FEMA maps, according to First Street data. In Dickson County that number is ten times that number.

That difference reflects the fact that FEMA’s maps look at flood hazard from major river channels but not risks from smaller streams and tributaries, according to Jeremy Porter, a professor at the City University of New York and head of research and development for the First Street. “All of the minor tributaries and streams that have been inundated with rainfall runoff are not currently mapped in this area,” said Dr. Porter.

A FEMA spokeswoman Jaclyn Rothenberg said the agency had prioritized which areas should be updated first and that local officials were responsible for looking for new maps. Humphreys Counties and Hickman Counties “have not made any requests for map updates,” she said. Ms. Rothenberg said the contrasting flood maps developed by FEMA and First Street are “different tools for different uses”.

On the afternoon of Friday, August 20, as central Tennessee weather forecasts began to rain more intensely overnight in Humphreys County – there are no building codes, no flood insurance, and outdated flood maps – one big decision remained: when and how? Warn people.

At 4:55 p.m., the National Weather Service office in Nashville urged local television and radio stations to warn people that this night could bring another 5 to 4 inches in addition to the heavy rainfall of the past few days.

“Higher amounts are possible,” says the message. “Be ready to take action if flash flood warnings are issued.” No statement was made about what action people should be ready to take.

The next morning at 6:09 a.m., the weather service began sending alerts directly to cell phones. “A FLASH FLOOD WARNING applies to this area,” said the message. “Do not try to travel unless you are fleeing a flood-prone area or are under an evacuation order.”

But when those first messages hit people’s phones, there was barely time to respond. “You got the notification on your phone around the same time the water was on your door,” said Dale Popp, the emergency management director for Houston County.

According to Sarah Tuneberg, an emergency manager who founded a company called Geospiza that helps local governments protect people during disasters, the National Weather Service’s warnings should have been given before the floods began. And she said these warnings should have given people specific instructions on whether to leave their homes.

Krissy Hurley, the meteorologist for the warning coordination for the National Weather Service in Nashville, said her office decided to warn people to avoid travel once reports of road flooding came in. She said the agency was careful about sending alerts too early.

“If you did this before it starts raining, people will get really mad at you,” said Ms. Hurley.

And her office has no power to adjust the wordings in these warnings, said Ms. Hurley, which she believed was standard news endorsed by the National Weather Service and FEMA.

In Waverly, Linda Ragsdale saw the warnings. But, as she remembered, the warnings were vague and general, warning of flooding in Middle Tennessee.

Little did she know that she would crawl into her attic with her dog, medicine and cell phone and wait for hours while she could hear wood groan and snap in her house

Her son called her early Saturday morning and asked if she had any water. “You could see puddles in people’s yards,” she said. “That’s all.”

At around 8:30 a.m. she got up and checked again. The wave filled their courtyard. The water, she said, was “quick and quick, and I didn’t have time to get to my car.”

Several meters of water rushed through her house. It was gutted. She also lost her car. She said she didn’t have flood insurance, nor anyone on her street.

“I don’t know what I could have done,” added Ms. Ragsdale. “It was just so quick. It was too fast. “

Rick Rojas and Jamie McGee contributed to the coverage.