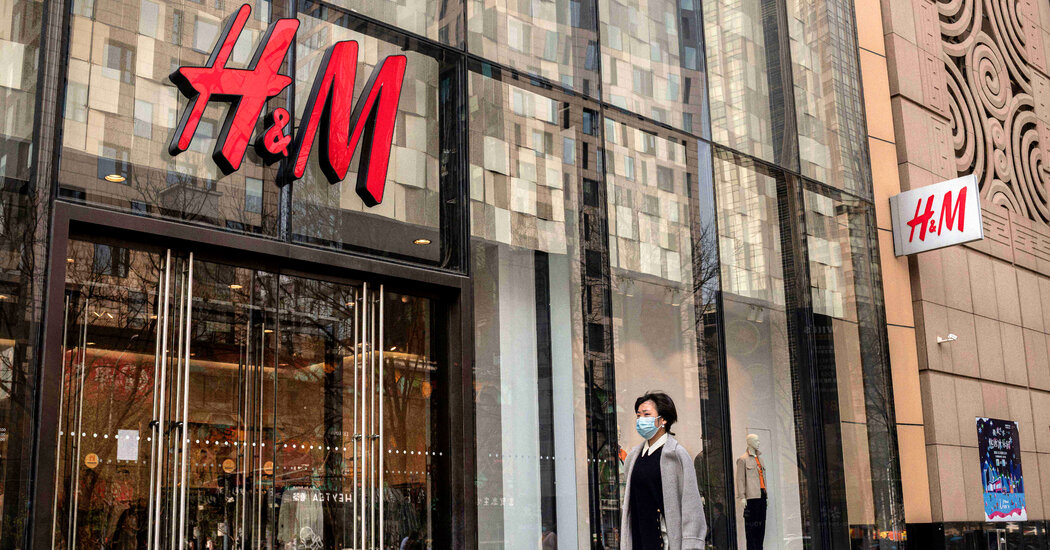 When Swedish fast fashion giant H&M announced in September that it was ending its relationship with a Chinese supplier accused of forced labor, some Chinese social media accounts dedicated to the textile industry took note. But on the whole the moment passed without fanfare.

The Communist Party’s youth wing condemned H&M on social media and posted an archive photo of slaves at a Mississippi cotton plantation. Official news outlets piled up with their own outraged memes and hashtags. Patriotic web users carried the message across far and wide corners of the Chinese Internet.

In a matter of hours, a tsunami of nationalist anger hit H&M, Nike, Uniqlo and other international apparel brands and became the latest outbreak of Chinese politics in the western region of Xinjiang, a major cotton producer.

The crisis that apparel brands are now facing is well known to many overseas companies in China. The Communist Party has been using the country’s vast consumer market for years to force international corporations to march in line with their political sensibilities, or at least not to openly deny them.

However, the latest episode has shown that the Chinese government is increasingly able to unleash storms of patriotic anger to punish companies that violate this pact.

In the case of H&M, the timing of the uproar seemed to be dictated not by anything the retailer had done, but by sanctions imposed on Chinese officials last week by the United States, the European Union, the UK and Canada related to Xinjiang were imposed. China has taken hundreds of thousands of Uyghurs and other ethnic minorities in the region to indoctrination camps and harshly pushed them into jobs at factories and other employers.

“The part of the hate festival is not subtle. It’s the same logic they’ve followed for decades, ”said Xiao Qiang, a researcher at the University of California’s School of Information at Berkeley and founder of the China Digital Times, a website that tracks Chinese internet controls. But “their ability to control it is getting better,” he said.

“They know how to make these pro-government, nationalist users shine,” Xiao continued. “You will be very good at it. You know exactly what to do. “

On Monday, a Chinese Foreign Ministry spokesman Zhao Lijian rejected the idea that Beijing had led the boycott campaign against H&M and the other brands.

“These foreign companies refuse to use Xinjiang cotton just because of lies,” Zhao said at a press conference. “Of course, this will spark the resentment and anger of the Chinese people. Does the government even have to encourage and guide this? “

After the Communist Youth League sparked outrage on Wednesday, other government-backed groups and state news outlets lit the flames.

The enthusiasm quickly caught the attention of Beijing’s highest levels. A State Department spokeswoman held up a photo of slaves in American cotton fields during a press conference Thursday.

The messages were reinforced by people with a large fan base but largely apolitical presence on social media.

Squirrel Video, a Weibo account devoted to silly videos, shared the Communist Youth League’s original post on H&M with its 10 million followers. A gadget blogger in Chengdu with 1.4 million followers shared a clip in which a worker removes an H&M sign from a mall. A user in Beijing who writes about TV stars highlighted entertainers who had terminated their contracts with Adidas and other target brands.

“Today’s China cannot bully everyone!” He wrote to his nearly seven million followers. “We don’t ask for trouble, but we are not afraid of trouble either.”

A fashion influencer named Wei Ya hosted a live video event on Friday trading products made from Xinjiang cotton. In her Weibo post announcing the event, she made sure to tag the Communist Youth League.

By Monday, news sites circulated a rap video combining the cotton issue with some popular recent lines of attack on Western powers: “How can a country where 500,000 have died of Covid-19 claim the hill?”

A Weibo user posted a lush animated video that he’d been working on all night. It shows men with white hoods pointing guns at black cotton pickers and ending with a lynching.

“These are your foolish deeds; we would never, ”reads a caption.

Less than two hours after the user shared the video, it was republished by Global Times, a party-controlled newspaper known for its nationalist tone.

Many web users who speak out during such campaigns are motivated by genuine patriotism, even if the Chinese government pays some people to post comments on party lines. Others, like the traffic-hungry blog accounts ridiculed as “marketing accounts” in China, are likely to be more pragmatic. You just want the clicks.

In these moments of mass glow, it can be difficult to tell where official propaganda ends and the search for opportunistic gains begins.

“I think the line between the two is becoming increasingly blurred,” said Chenchen Zhang, assistant professor of politics at Queen’s University in Belfast who studies Chinese Internet discourse.

“Nationalist issues are selling; They bring a lot of traffic, ”said Professor Zhang. “Official accounts and marketing accounts come together and everyone participates in this ‘market nationalism’.”

Chinese officials are making sure the anger doesn’t get out of hand. According to tests by the China Digital Times, Internet platforms have been carefully monitoring search results and comments on Xinjiang and H&M since last week.

An article in the Global Times urged readers “to be firm in criticizing those like H&M who intentionally provoke, but at the same time remain rational and beware of pretend patriots joining the crowd to incite hatred.” “.

The Communist Youth League has been at the forefront of optimizing party messages for viral engagement. Its influence is growing as more voices in society seek ways to show loyalty to Beijing, said Fang Kecheng, assistant professor at the School of Journalism and Communication at Hong Kong University of China.

“They have more and more fans,” said Professor Fang. “And whether it’s other government departments, marketing accounts, or those nationalist influencers, they all pay closer attention to their positions and follow immediately.”

The H&M riot had the presumably unintended effect that more Chinese internet users discussed the situation in Xinjiang. For many years, people generally avoided the topic, knowing that comments dealing with the harsh aspects of Chinese rule could get them into trouble. In order to avoid detection by censors, many Internet users did not designate the region with its Chinese name, but with the Roman letter “xj”.

But in the past few days, some have found out firsthand why it is still worth being careful when talking about Xinjiang.

A beauty blogger told her nearly 100,000 Weibo followers that she was contacted by a woman who said she was in Xinjiang. The nameless woman said that her father and other relatives were imprisoned and that the foreign news about mass internment was all true.

“Support not only Xinjiang cotton, but also Xinjiang people!” Another Weibo user wrote. “Support Xinjiang people who walk the streets without having their phones and IDs checked.”

Lin Qiqing contributed to the research.