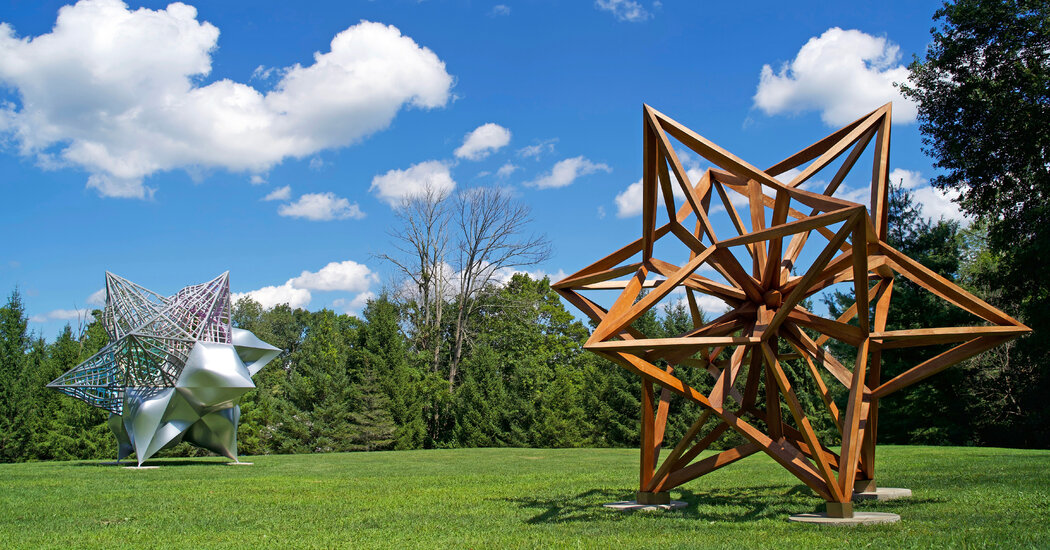 RIDGEFIELD, Conn. – For Carl Jung, a name wasn’t just a name. In his book Synchronicity, published in 1960, the Swiss psychiatrist suggested that what you are called could have a decisive impact on your whole life by structuring your behavior and your attitudes so that they resemble a secret compulsion. Someone named Herr Gross (“Mr. Tall” in German) is probably “delusional”, wrote Jung, while Mr. Kleiner (“Mr. Little Guy”) “has an inferiority complex”. The good doctor did not spare himself from this diagnosis; Why is Doctor Jung so interested in youth while Freud (“Dr. Joy”) advocates the pleasure principle?

Pretty stupid theory. But then consider “Frank Stella’s Stars, A Survey” as a calm but cheering exhibit at the Aldrich Contemporary Art Museum. Classified as a “minimalist” since the debut of his striped black paintings in 1959, Stella has spent decades reformatting the shapes and materials of abstract painting – to the point that his bulging reliefs and metal casts are sculptural rather than painterly were. How can one reconcile the gestures of art in two dimensions with the volumes of three? Late in his career, he found an answer in his own surname: the star (stella in Italian), a motif that he first explored almost 60 years ago, then gave up, and has since returned with verve.

This show includes 25 works: on the wall or free-standing, inside or outside, minimal or lush, jet black or mixed in color, as small as a softball or as high as a giraffe. The Aldrich has installed three stainless steel stars with a view of Ridgefield’s main street, while in the back garden there are two fantastic stars with struts made of teak or cast aluminum. They are set in the grass like colossal jacks.

Almost everything here is from the last decade. The star is a 21st century marker for Stella, even if it has a small place in his early career. Whatever a clinical psychiatrist (or an onomastic) might do with this late constellation, for an art critic, “Frank Stella’s Stars” is a testament to an artist who is now 84 years old and constantly evolving. His focus on the star motif ultimately confirms the restlessness of this painter’s progress and his underestimated preoccupation with new technologies for design, manufacture and presentation.

Stella addressed the star with its sculpted canvases from the 1960s as a compositional element. At the age of 23 he had come to the fore when the Museum of Modern Art showed his “black paintings” with poker faces, the surfaces of which were smeared with stripes. The thickness and direction of the stripes were derived from the edges of the canvas and the thickness of the brush, resulting in abstractions derived from the most basic components of the painting.

Young artists today accept our condition after the medium, but in post-war New York the basic properties of painting or sculpture were sacrosanct and the success of a painting was often measured by how true it was to the essence of the medium. A painting was a painting, and “a sculpture,” as Stella famously put it, “is just a painting cut out somewhere and stood up.”

In 1960, Stella began painting stripes on canvases stretched over custom fittings: crosses, T’s, zigzags – and stars. Here at the Aldrich there is an eight-pointed canvas from 1963, the orthogonal red and orange stripes of which radiate from the corners to the center. (Also on display: a drawing and two lithographs from 1967 that reproduce a star-shaped canvas with stripes forming chevrons.)

But the formed canvas destroyed even more than the flat strips the remaining illusion that a painting was a window into a world. By the time this show skipped, Stella’s paintings became more object-like (with the curved, colorful protractors of the late 60s) and then began to bounce off the wall (in his large 1970s Polish village series of reliefs) inspired by images of Wooden synagogues and wooden buildings that were as good as lost in World War II). Among their challenges, these paintings insisted that their positioning on a wall is not accidental; Painting and wall informed each other, similar to a sculpture on a pedestal.

In the 1990s, the artist began “painting” three-dimensionally with the help of computer-aided design software that architects use to render buildings. Stella played a role again in these hybrid paintings / sculptures, including the 12-foot mural “Nessus and Dejanira” (2017) with a twelve-pointed star made of multi-colored aluminum grids, embedded in a large fiberglass cloth. These later reliefs came up against the limits of new manufacturing processes such as 3D scanning and plastic rapid prototyping. But they still feel like art with an identity crisis that’s hard to admire but hard to love – and its smaller reliefs of stars and slinkies on steel plates look crazy, for God’s sake.

Stella discovered that the way forward at the turn of the 2010s was to get off the wall and use the computer as a painting tool to produce stars in their own right. The stars are often monochrome, black or beige, or naturally metallic, and their points can take the form of solid planes, spindle-shaped lines, or wire mesh circuits. Stars collide and interweave in an illuminated gallery of small prototypes, the star shapes of which appear as 3D printed studies.

The imposing “Fat 12 Point Carbon Fiber Star”, whose 21 feet are amusingly crammed into an undersized gallery, expands the twelve points of the star like overcrowded balloons. The glossy black finish is as sleek as one of the artist’s favorite racing cars, though the finish and color were never really an integral part of Stella’s art. A smaller aluminum star outdoors won’t obscure its soldered corners and rusting connections. Unlike Jeff Koon’s fetish objects or Anish Kapoor’s distorting bodies, Stella’s stars are more rewarding than exercises in style and form that test and maximize what a given medium can do.

Similar to the orthogonal stripes on the early canvases, the shapes of the stars are determined using a clear geometric process. You start with a simple body – most often a dodecahedron or a body with twelve pentagonal faces – and then form the points of the star by extruding each edge. The resulting twelve-pointed star (called the little star dodecahedron) can then be printed in nylon or thermoplastic, cast in steel or aluminum, and rendered to two feet or twenty. It’s rule-based but smooth. Under “Jasper’s Split Star”, whose tips are half solid and half wire mesh, dwarfed, I felt nothing of the arrogance that appears in so many large-format sculptures. The star is a sympathetic, even friendly offer from an artist who is still committed to the new way of thinking.

One last strange thing is the names of these stars. Stella is perhaps the most famous female titler in contemporary art. His abstract paintings are named after Brazilian birds and Balinese anthropology, Scarlatti sonatas, and National Socialist marching melodies. But, strangely enough, the stars were christened with the most unpoetic titles in his oeuvre. A small sculpture made of two stars attached to a metal framework is simply called “Stars with framework I”. A star made of orthogonal metal tubes is just “star with a square tube”. This beautiful teak position in the grass is called “Frank’s Wooden Star”. It is as if these late works no longer needed poetry: just his name and the other Stella, connected with the stuff of art.