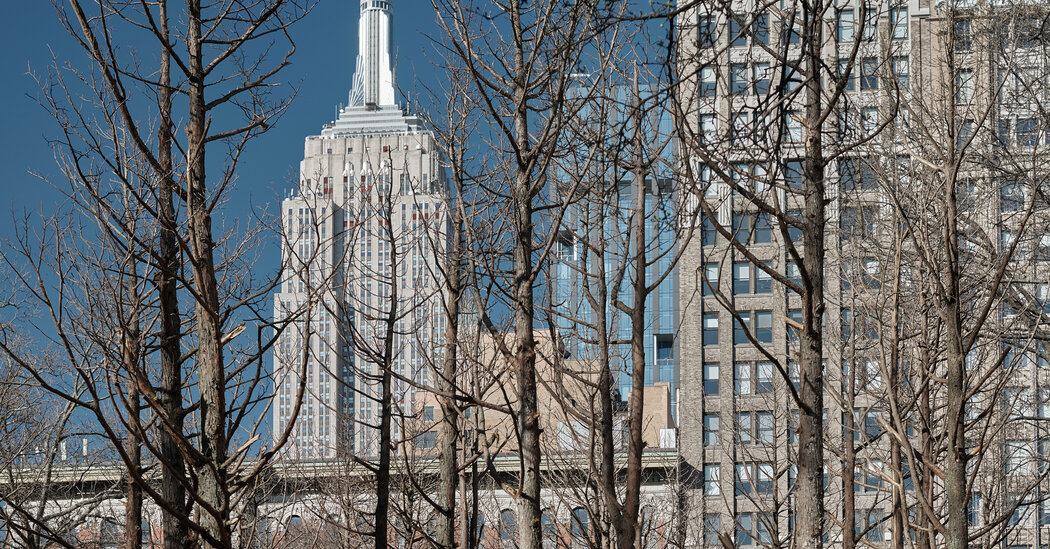 On a sultry summer day, the trees across the street from my Bronx apartment were engrossed in conversation. Trees, as science tells us, are social beings and do some of the same things as humans, at least when we do our best. They exchange tips on the subject of health, news about the weather. They nourish and protect and support one another. They also support fellow human beings: birds, insects, us. You live a healthy life. They generate excellent karma.

Not like us. In a constantly moving universe, the karma we produce – through competitive greed, thoughtless waste, and deliberate malice – kills the world around us. We are at war with the planet and everything on it, including the trees.

The artist and architect Maya Lin began her career reacting to a war. Your 1982 Vietnam Veterans Memorial in Washington, a black granite hammered into American soil, commemorates a “foreign” war that turned into an internal war and divided the nation. Her new installation “Ghost Forest”, which can be seen in Madison Square Park in Manhattan until November 14, also serves as a reminder. It’s a sky-high memorial to a war in progress against everything we call nature.

Is “against” too active a formulation? Some people just don’t know that there is man-made climate change. Others underestimate its severity. Still others – a new president of the United States – dismiss it as fiction. In not dissimilar ways, we ignored or downplayed the Vietnam War in its early stages until the protests got really loud, pictures of the My Lai massacre leaked, and guys we partied with in high school came home in body bags.

Now as then, perplexity and denial are hard to bear. Temperatures are rising, banks are flooded, fields are shrinking. Entire species – quadruped, winged, fins, and roots – are suddenly MIA, and the list of victims grows. In the US, however, public protests against climate change are still sporadic and lukewarm, which is why every gesture of resistance feels crucial, as “Ghost Forest” does.

The “Ghost Forest” was commissioned by the Madison Square Park Conservancy and is essentially a restored patch of damaged nature. From the Pine Barrens on the New Jersey coast, Lin brought 49 full-grown Atlantic white cedars, each about 12 meters high, to Manhattan and planted them together in the middle of a lush Madison Square park. In the context of the park’s tree-like luxury, they are a strange sight, as they are leafless and clearly dead or dying.

They had been harvested from a habitat that had been infiltrated by salt water as a result of climate change. Salt water is poison to trees; it rots them inside. Terminally ill, the cedars in the park had now been moved from their original home to make way for a regeneration measure.

Although Lin was trained as an architect – she recently redesigned the Neilson Library at Smith College in Northampton, Massachusetts – her most memorable public work was sculpture, using nature as both a medium and a subject. In 2009, at the Storm King Art Center, 60 miles north of Manhattan, she created an 11-acre flat landscape of gently sloping hills from packed earth and grass, the shapes of which were inspired by the waves of the ocean and the surrounding mountains of the Hudson Valley.

“My affinity has always been to shape the earth”, she wrote in her autobiographical book “Boundaries”, published in 2000, “this impulse has shaped my entire work.”

Since this book was published, the focus on planetary survival has sharpened dramatically. Climate justice, which overlaps with other social justice initiatives, is – in Europe certainly – one of the activist movements at the forefront of the 21st century.

If “Ghost Forest” is technically not an activist art – like “Wave Field” it is closer to the “environmental art” of an earlier era – its blatant image of earthly loss is driven by the same urgency as opposition to climate justice.

Nevertheless, it takes a few minutes in the park until the image is fully registered. From a distance, the transplanted cedars merge with the larger tree-dwelling tissue. Then tonal contrasts begin to sort themselves: the trunks of the living trees in the park are loamy brown and black; that of the cedars, a dry gray-white. (This difference was immediately noticeable when the facility opened in May, before the park was fully leafy, and will likely be again when summer turns into fall.)

Another contrast: look up while standing under the trees in the park and you will see an overhang of green, thick enough to keep rain out; Look up while standing under the cedar trees and you will see the open sky. Whatever foliage they once had is long gone, and its branches appear to have been shaved off. Only a few remain, like thin, protruding arms.

To produce it, she carefully choreographed the placement of the cedars. A few are lined up in rows like cathedral columns. But most are in asymmetrical groupings, the equivalent of talkgroups found at parties and neighborhood gatherings, and of a type that trees in the wild actually form to communicate through their surfaces and share nutrients through their plants Root.

In addition, the “Ghost Forest” project contains what Lin calls “advocacy components”. She arranged an autumn planting of a thousand trees in the five boroughs to offset the carbon used in shipping the cedars to Manhattan. And it maintains an online database “What is Missing?” That monitors the disappearance of plant and animal species. (She calls the website whatismissing.org the “final memorial”.)

Most moving – and thus politically most effective – about “Geisterwald”, however, is the way in which it personalizes its subject. Without sentimentalizing or metaphorising, it presents trees as living, breathing, dying, relatable beings and karmic companions whom I watch with love from my Bronx window and whom John Ashbery celebrates in these lines from one of his early poems, “A couple Trees “:

These are amazing: everyone
Joining a neighbor as if they were making a speech
It was a silent performance.
Appointment by chance to meet so far this morning
From the world as approving
So that you and me
Are suddenly what the trees are trying to tell us we are:
That they are only there
Means something; as soon as
We can touch, love, explain.