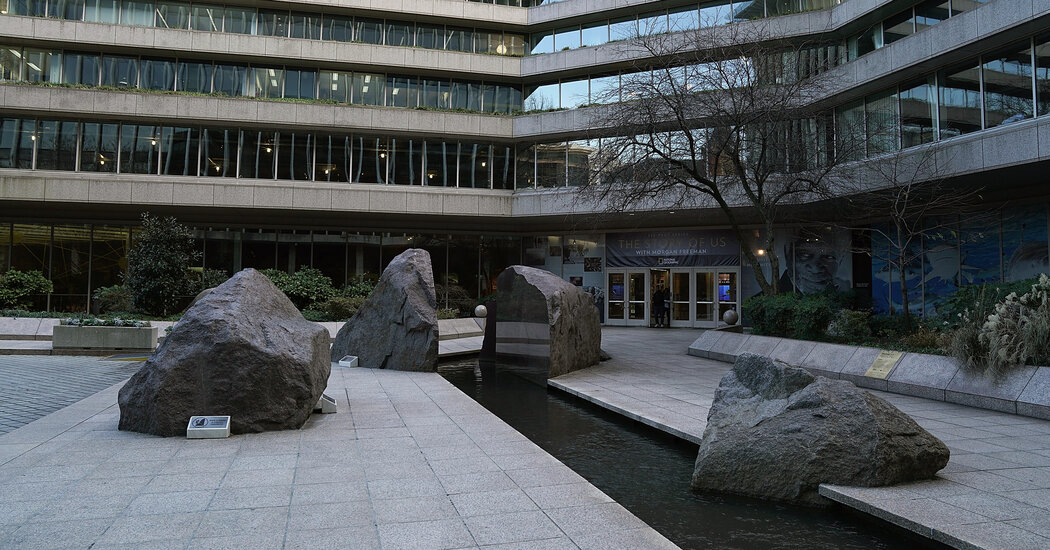 The National Geographic Society is committed to maintaining and relocating a landmark outdoor sculpture that the Society claimed blocked its ability to do so expand and improve its campus in Washington.

“Marabar”, a granite-water work of art by the artist Elyn Zimmerman from 1984, stands in the way of the planned new entrance square and pavilion of the society with a garden roof. Admirers of the work had organized a campaign to preserve it.

At last week’s Historic Preservation Review Board meeting, Society officials assured the board that they would work with Zimmerman and her supporters to find a new home for Marabar and pay the bill for safe removal and reinstallation work.

“You’re trying to do the right thing, and I appreciate that,” Zimmerman, 75, said in an interview.

Marabar was named after the fictional caves in an EM Forster novel and has been the centerpiece of the National Geographic campus for 35 years. Underground pumps allow water to flow between the boulders like a 50-foot creek flowing through an urban canyon. It only changed once: when National Geographic installed a ramp for a pair of mallards that raised ducklings in the pool every spring.

“This is a great conclusion to this unfortunate controversy,” said Outerbridge Horsey, a board member who accused National Geographic of not being a better steward of the critically acclaimed work of art.

The Kulturlandschaftsstiftung, a non-profit organization that says part of its mission is to raise awareness of threatened landscapes, had campaigned for the rescue of “Marabar” and received more than two dozen letters of support from collectors, eminent architects and museum directors such as Adam D requested Weinberg, director of the Whitney Museum of American Art in New York. In late May, the Washington Review Board voted that National Geographic should return for another hearing and consider the possibility of keeping “Marabar” in the construction of the new pavilion.

The final location of the sculpture has not yet been determined.

The company had made plans to move “Marabar” to a location several miles south of downtown Washington known as Canal Park, an open space with public art, a fountain, and a winter ice rink – and even a memorandum of understanding too sign the board that rules it.

However, Zimmerman, who lives in New York, said she had not been consulted. When she traveled to Washington last month to view the grounds, she felt it was inappropriate as there was a lack of safety and potential for skateboarders to damage the carefully polished and sculpted granite boulders, the largest of which weighs more than 250,000 pounds, but is only six inches thick in some places.

“I want ‘Marabar’ to be protected but still open to the public,” said Zimmerman.

With the help of the Cultural Landscape Foundation, she is now looking for a university, a sculpture garden or another cultural institution that would like to accommodate “Marabar”.

Kathryn Keane, vice president of public programs for the National Geographic Society, said at last week’s meeting that there had been “a lot of goodwill” in recent discussions of “Marabar,” and praised Zimmerman for her thoughtfulness and creativity.

“Now we understand Elyn’s primary concern for the safety of this work, and it is very large, beautiful blocks of granite,” said Keane.

Charles Birnbaum, President of the Cultural Landscape Foundation, thanked Keane for her “commitment to the solution” and the board for their intervention with “care and consideration”.

“We are working with the artist on what she thinks is appropriate and we will follow her example,” said Birnbaum.

Although she wants her work in her new home to be protected from potential human harm, Zimmerman said public art should coexist with waterfowl.