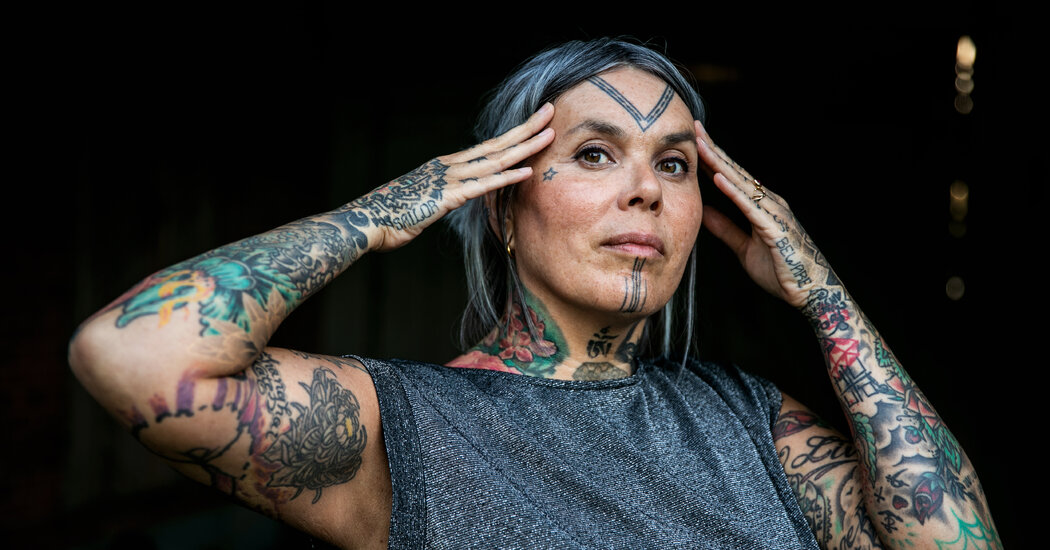 In the 1970s, hunters came across eight 500-year-old bodies preserved by the arctic climate near Qilakitsoq, an abandoned Inuit settlement in northwest Greenland. When scientists later photographed the mummies with infrared film, they made a fascinating discovery: five of the six females had delicate lines, dots and arcs tattooed on their faces.

For millennia, tattoos have been more than just body jewelry for Inuit and other indigenous cultures. They served as symbols of belonging, signifying rituals of growing up, channeled spiritual beliefs or conferred powers that could be called up at birth or hunting. However, from around the 17th century onwards, missionaries and colonists who aimed to “civilize” indigenous peoples stopped tattooing in all but the most remote communities.

The practice disappeared so thoroughly in Greenland that childhood Maya Sialuk Jacobsen worked as a western-style tattoo artist for a decade before realizing that her Inuit ancestors were tattooers too, albeit of a completely different nature.

Today Ms. Sialuk Jacobsen uses historical documents, artifacts and the Qilakitsoq mummies – some of which are now on display at the National Museum in Greenland – to research traditional Inuit tattoo designs. She then stitches or sews the patterns on the faces and bodies of Inuit women, and occasionally men, to help them bond with their ancestors and reclaim part of their culture.

“I take great pride in tattooing a woman,” she said. “When she meets her foremothers in the afterlife, it will be like looking in a mirror.”

Without the physical records left by ancient tattoos, modern practitioners like Ms. Sialuk Jacobsen would have little evidence of their work. Fortunately, as more indigenous tattooists around the world revive lost traditions, a small group of archaeologists are tracking tattooing through time and space, discovering new examples of its role in historical and prehistoric societies. Together, the scientists and artists show that the urge to paint our bodies with ink is deeply rooted in the human psyche, spans the globe and speaks for centuries.

Put the needle on the record

Until recently, western archaeologists largely ignored tattooing. Due to the disinterest of these scientists, tools for tapping, pricking, sewing, or cutting human skin were cataloged as sewing needles or awls, while tattooed mummies were “viewed as objects of fascination rather than scientific specimens,” said Aaron Deter-Wolf, a prehistoric archaeologist of the Tennessee Division of Archeology and a leading researcher in the archeology of tattooing.

Even when the 5,300 year old body of Ötzi the Ice Man with visible tattoos was recovered from the Italian Alps in 1991, some news at the time indicated that the markings indicated that Ötzi was “probably a criminal,” sir Deter-Wolf said. “It was very biased.”

But as tattooing has become more mainstream in Western culture, Mr. Deter-Wolf and other scholars have started studying surviving tattoos and artifacts to gain insight into the way of life of earlier people and their beliefs.

For example, a 2019 study of Ötzi’s 61 tattoos paints a picture of life in Copper Age Europe. The dots and lines on the mummy’s skin correspond to common acupuncture points, suggesting that people had an elaborate understanding of the human body and may have used tattoos to relieve physical ailments such as joint pain. In Egypt, Anne Austin, an archaeologist at the University of Missouri-St. Louis, has found dozens of tattoos on female mummies, including hieroglyphics, suggesting the tattoos were associated with the worship and healing of goddesses. This interpretation challenges the theories of 20th century male scholars that female tattoos were simply erotic decorations or were reserved for prostitutes.

The scientific study of tattooed mummies also inspires practitioners like Elle Festin, a tattoo artist of Filipino descent who lives in California. As the co-founder of Mark of the Four Waves, a global community of nearly 500 members of the Filipino diaspora united by tattooing, Mr. Festin has spent more than two decades studying Filipino tribal tattoos and using them to describe people outside of the Philippines to help reconnect with their homeland. One of its sources are the “fire mummies” – people of the Ibaloi and Kankanaey tribes, whose heavily tattooed bodies were preserved centuries ago by slowly burning fire.

If customers are from a tribe that made fire mummies, Mr. Festin will use the mummy’s tattoos as a frame for creating their own tattoos. (He and other tattooists say that only people with ancestral connections to a culture should get that culture’s tattoos.) To date, 20 people have received fire mummy tattoos.

For other customers, Mr. Festin becomes more creative and adapts age-old patterns to modern life. For a pilot he says: “I would put a mountain below, a frigate bird on top and the patterns for lightning and wind around it.”

Although mummies provide the most conclusive evidence of how and where previous humans inked their bodies, they are relatively rare in archaeological records. More common – and therefore more helpful to scientists tracking the footprint of tattoos – are artifacts such as tattoo needles made from bones, shells, cactus spikes, or other materials.

To show that such tools were used for tattooing rather than sewing leather or clothing, archaeologists like Mr. Deter-Wolf replicate the tools, use them to tattoo either pig skin or their own body, and then examine the replicas under high powered microscopes . If the tiny wear patterns from repeated piercing the skin match those of the original tools, archaeologists can conclude that the original artifacts were indeed used to tattoo.

Through such meticulous experiments, Mr. Deter-Wolf and his colleagues shift the timeline of tattooing in North America. In 2019, Mr. Deter-Wolf was the author of a study that showed that the ancestors of the modern Pueblo people tattooed cactus spines about 2,000 years ago in what is now the American Southwest. That year he published a finding showing that people in what is now Tennessee used turkey bones to tattoo with needles about 3,500 years ago.

Dion Kaszas, a Hungarian, Métis and Nlaka’pamux tattoo artist and scholar in Nova Scotia, learns how to make his own bone tattoo needles from Mr. Deter-Wolf and Keone Nunes, a Hawaiian tattoo artist. His goal is to “return to this ancestral technology; to feel what our ancestors felt. ”With few examples of Nlaka’pamux tattoos remaining, Mr. Kaszas uses designs made from baskets, ceramics, clothing and rock art. Research from other cultures shows that tattoo designs often mimic the patterns of other artifacts.

For Mr. Kaszas and others, tattooing is not just a way to revive an indigenous language that was almost silenced by colonialism. It also has the power to heal past wounds and empower indigenous communities for the future.

“The work our tattoos do to heal us is a different type of work than what our ancestors did,” said Mr. Kaszas. “This is a form of medicine in which people look down at their arm and understand that they are connected to a family, a community, the earth.”

Ink back from the edge

Although people from numerous cultures have reclaimed their tattooing legacy over the past two decades, there are many others whose legacies have been completely obscured by colonization and assimilation. However, as scientists pay more attention to tattooing, their work could bring more lost traditions to light.

Mr. Deter-Wolf hopes that archaeologists in other parts of the world will begin to identify tattoo artifacts using the methodology he and other North American scientists have developed, thereby reducing their footprint even further. He also maintains an open source online database of tattooed mummies designed to correct popular misinformation and to illustrate the geographic distribution of such specimens. The list includes mummies from 70 archaeological sites in 15 countries – including Sudan, Peru, Egypt, Russia, and China – but Mr. Deter-Wolf expects it to grow as infrared imaging and other technologies discover more colored skin on existing mummies.

Back in Greenland, Ms. Sialuk Jacobsen hopes that the Qilakitsoq mummies will also be able to reveal more secrets. She encourages curators to use infrared images to examine other parts of the mummies’ bodies, such as their thighs. Inuit women in other parts of the Arctic are given thigh tattoos as part of childbirth rituals, but while historical drawings show thigh tattoos of Greenlandic women, there is still no tangible evidence.

If the mummies of Qilakitsoq have thigh tattoos, Ms. Sialuk Jacobsen could one day copy the patterns on women from the Qilakitsoq region, drawing a line between generations of the past and those to come.

“Our tattoos are very selfless,” she said. They are not only intended for the woman who receives them, but also for their grandmothers, their children and their entire community.