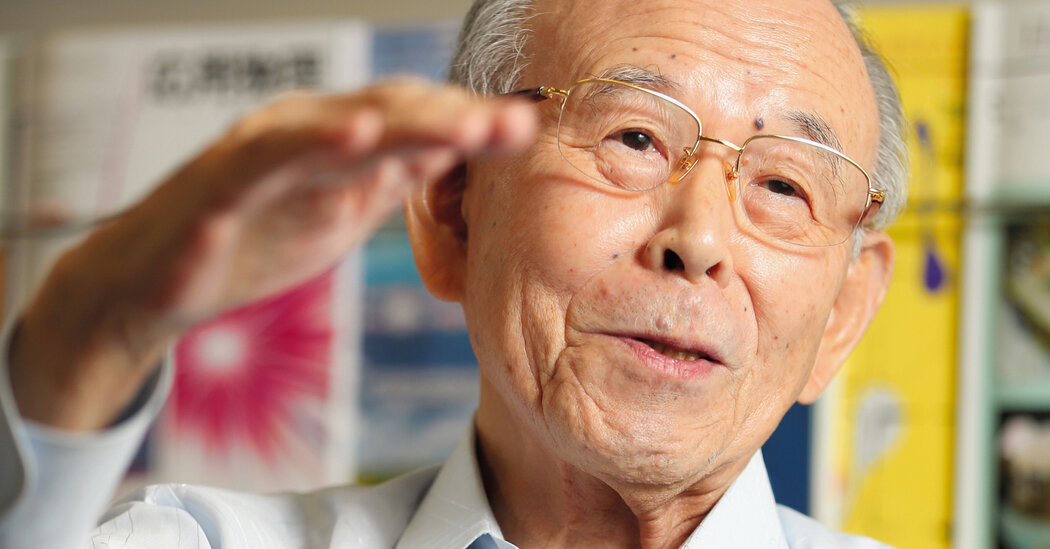 Isamu Akasaki, a Japanese physicist who helped develop blue light emitting diodes, a breakthrough in LED design that earned him a Nobel Prize and changed the way the world is lit, died Thursday in a hospital in Nagoya , Japan. He was 92 years old.

Meijo University in Nagoya, where he was a professor, said the cause was pneumonia. He was also affiliated with Nagoya University.

Dr. Akasaki shared the 2014 Nobel Prize in Physics with Hiroshi Amano from Japan and Shuji Nakamura from the University of California at Santa Barbara. Their invention of the blue light emitting diodes pioneered a large wave of light sources that are cheaper, more durable and more environmentally friendly than incandescent and fluorescent lamps.

“You have succeeded where everyone else has failed,” said the Royal Swedish Academy of Sciences in its award ceremony. “Your inventions were revolutionary.”

First generation LED lamps required a combination of red, green, and blue light to produce familiar white light. While red and green diodes were first developed in the 1950s and 1960s, blue light proved to be a far more difficult hurdle.

After early work at RCA in the late 1960s, Dr. Akasaki in the early 1970s at the Matsushita Research Institute Tokyo, an electronics company, trying to grow high-quality crystals of the semiconductor gallium nitride. Later, at the University of Nagoya, he was taught by Dr. Amano, his then PhD student, was involved in his research.

By the late 80s, they had managed to create blue light from their chips. Around the same time, Dr. Nakamura, who worked at Nichia Corporation, a chemical company in Tokushima, followed up on her breakthrough to produce a light blue LED that the chips could eventually be used for lighting.

LEDs have been ubiquitous since then, powering everything from flashlights and street lights to televisions. They give off much less heat than incandescent lamps, use much less energy than phosphors, and last much longer.

Bob Johnstone, a technology journalist and author of “LED: A History of the Future of Lighting” (2017), said in an email, “The prevailing belief in the late 1980s was that due to the number of defects in the crystal due to the Structure of gallium nitride, it would never be possible to manufacture light-emitting diodes from it. So why should you even try? “

Dr. Akasaki, he continued, “was ready to hold on to what was almost universally recognized as a lost cause, and worked long after researchers at RCA and other US pioneers of gallium nitride LED technology gave up.”

“In the end,” said Mr. Johnstone, “his persistence – sheer tenacity – has paid off.”

Gerhard Fasol, a physicist with extensive background in Japanese high technology, said via email that the potential of LEDs is particularly far-reaching in developing countries without reliable power, where “LEDs combined with batteries and solar cells can significantly improve the quality of life and education and Trade. “

According to Strategies Unlimited, a market research firm based in Nashville, LED products accounted for nearly 60 percent of the global lighting market in 2019, compared to less than 10 percent in 2010. In the US, LEDs are expected to reach over 80 percent of all lighting sales by 2030 and Americans Save $ 26 billion a year in electricity costs, according to a 2015 report by the Department of Energy.

Isamu Akasaki was born on January 30, 1929 in Chiran in southernmost Japan. After graduating from Kyoto University in 1952, he worked for the Kobe Kogyo Corporation (later called Fujitsu) until 1959. He then attended Nagoya University, where he held several teaching positions before earning his doctorate in engineering in 1964.

He continued his career at Matsushita before returning to Nagoya University in 1981 as a professor in the electronics department. He was appointed professor emeritus in 1992 and later moved to the faculty of Meijo University, also in Nagoya, where he was director of the Research Center for Nitride Semiconductor Core Technologies. In 2019 he was still working at the university.

Dr. Akasaki has received hundreds of patents for his research over the years, and royalties from his pioneering work with Dr. Amano eventually funded the construction of a new research institute, the Akasaki Institute at Nagoya University, which completed the Nobel Prize in 2006, received many other awards, including the 2009 Kyoto Prize, and was awarded the Order of Culture by the Japanese Emperor in 2011.

He had a wife, Ryoko. Complete information on his survivors was not available.

When Dr. When Akasaki was asked in a 2016 interview with the Electrochemical Society to summarize the philosophy of his long-term single-minded research, he replied, “No pain, no gain.”

“I tell this to younger people: experience is the best teacher,” he continued. “That said, sometimes there is no royal way to learn.”