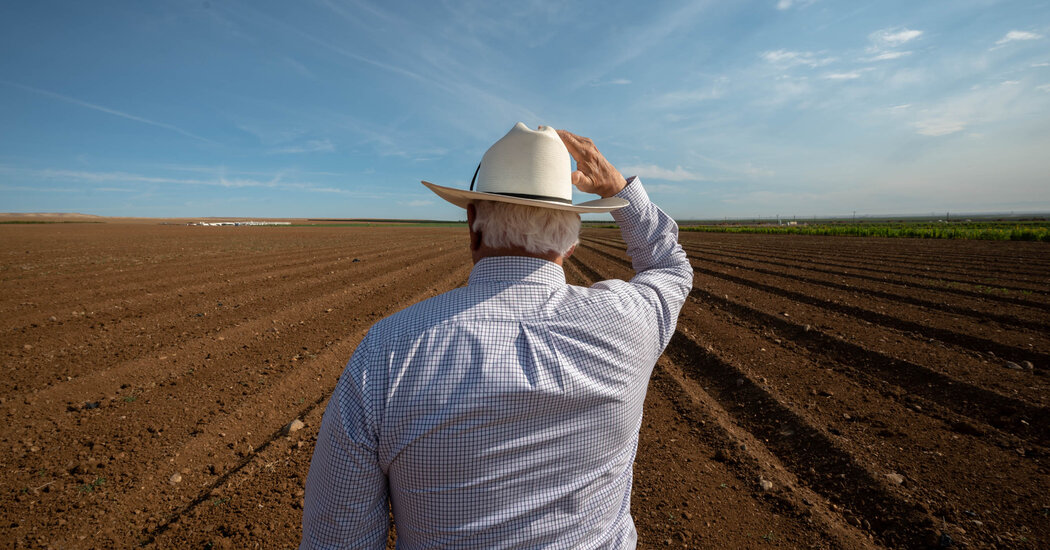 ORDBEND, Calif. – In America’s fruit and nut basket today, water is the most precious harvest of all.

It explains why a producer of premium sushi rice, amid a historic drought that dried up much of the American West, concluded that it makes more economic sense than selling the water they would have used to grow rice growing rice. Or why a melon farmer left a third of his fields fallow. Or why a large landowner further south is thinking of planting a solar array in his fields instead of the thirsty almonds that have made steady profits for years.

“You want to sit there and say, ‘We want to monetize the water?’ No, we don’t, ”said Seth Fiack, a rice farmer here in Ordbend on the banks of the Sacramento River who has practically no rice this year and instead sold his wasted water to desperate farmers further south. “It’s not what we’d rather do, but it’s what we kind of have to, have to.”

These are, among other things, signs of tremendous change in California’s Central Valley, the country’s most lucrative agricultural belt, which is facing both an exceptional drought and the consequences of years of pumping way too much water out of its aquifers. Across the state, reservoirs are falling and power grids are at risk when dams don’t get enough water to generate electricity.

Climate change is increasing the scarcity. Rising temperatures dry out the soil, which in turn can exacerbate heat waves. This week, temperatures broke records in parts of California and the Pacific Northwest.

By 2040, the San Joaquin Valley is projected to lose at least 535,000 acres of agricultural production. That is more than a tenth of the cultivated area.

And if the drought persists and no new water can be found, almost twice as much land is likely to lie fallow, with potentially dire consequences for the country’s food supply. California’s $ 50 billion agricultural sector provides two-thirds of the country’s fruits and nuts and more than a third of America’s vegetables – the tomatoes, pistachios, grapes, and strawberries that line the shelves of grocery store shelves from coast to coast.

Glimpses of that future are now evident. Large stretches of land lie fallow because there is no water. New calculations are being made about which plants should be grown how much and where. Millions of dollars are being spent to replenish the long-depleted aquifer.

“Every time we have a drought, you see a glimpse of what will happen more frequently in our future climate,” said Morgan Levy, professor of water science and policy at the University of California at San Diego.

A difficult decision for rice farmers

California’s fertile Central Valley begins in the north where the water begins. During normal times, winter rains and spring snowmelt swell the Sacramento River and nourish one of the country’s major rice belts. In an average year, growers around the Sacramento River produce 500,000 acres of sticky, medium-grain rice, which is essential for sushi. Around 40 percent are exported to Asia.

But these are not normal times. There is less snow cover and this year much less water in the reservoirs and rivers that ultimately irrigate fields, provide spawning grounds for fish, and provide drinking water to 39 million Californians.

This crisis presents rice farmers in the Sacramento Valley, which forms the northern part of the Central Valley, with a difficult choice: should they grow rice with their existing water or should they save the hassle and stress and sell their water instead?

Mr Fiack, a second generation rice farmer, decided to sell almost all of it.

His 30 hectare rice field shines green in the June sun, gushing water that gushes from a wide-open tap. Its remaining 500 acres are bare and brown. The water he would have used to grow rice he gave away for sale to growers of thirsty plants hundreds of kilometers south, where water is even scarcer.

At $ 575 per acre-foot (an acre of water a foot deep), sales are cheap compared to what it would have done growing rice – without the headaches. It was “economically sensible,” said Mr Fiack flatly.

Rice is far less lucrative than, for example, almonds and walnuts, which is why Mr. Fiack’s fields are surrounded by nut trees and even he works with walnuts. But rice farmers have unique advantages. Because their land has been in production for so long, they tend to draw water from the Sacramento River first before sending it south through canals and tunnels.

In addition, unlike the owners of fruit and nut trees, whose investments wither in a few weeks without water, rice farmers can leave a field fallow for a year, even two. In times of climate change, when water can be unreliable, this flexibility is an advantage. The transfer of rice water was an important part of California’s drought management strategy.

This year, rice farmers in the Sacramento Valley will produce around 20 percent less rice.

Not everyone is enthusiastic about this.

Kim Gallagher, a third generation rice farmer, left only 15 percent of her fields fallow. She worries about the impact on the rice mills and crop duster pilots who make a living from growing rice, not to mention the birds that winter in the flooded fields. “These are compromises that every farmer has to make, what he can and cannot break,” she said. “Everyone has a different number.”

Fritz Durst, a fourth generation rice farmer, fears that California rice buyers will view his region as an unreliable supplier.

He also hedged his bets. He grows rice on about 60 percent of his 527 acres, which allows him to sell the Sacramento River water that he would have used for the rest.

But from his point of view there is a long-term risk of selling too much water too often. “There are also people here who are concerned that we are setting a dangerous precedent,” he said. “When we start allowing our water to flow south of the delta, these people will say, ‘Well, you don’t need this water. It’s ours now. ‘”

Federico Barajas is in the enviable position of finding water. As the manager of the San Luis and Delta-Mendota Water Board, he has negotiated a purchase agreement for water districts like Mr. Durst’s.

There’s only one problem: Because the rivers are so hot and dry this year, the federal government that operates Shasta Dam, which stores cold water from the Sacramento River, has said the water will be in the reservoir for the summer months must remain a source of food: fish that hatch in California’s rivers.

He doesn’t accept defeat. “We’re still looking for someone out there who has a drop of water to buy and transfer,” he said calmly.

Nearby, on Interstate 5, Joe Del Bosque had expected the rice water from the north. That’s how he survived the droughts of the past, he said. “This is the worst year we have ever had,” said Mr Del Bosque.

Mr. Del Bosque grew up on melon farms with his father, a farm laborer. Today Mr. Del Bosque owns a melon farm near the town of Firebaugh. He grows organic melons and watermelons on most of his 2,000 hectares, which are destined for supermarket shelves across the country. “MELONS” is written on the license plate of his GMC truck.

This year he left a third of his land fallow. There just isn’t enough water. In some fields he had also planted asparagus just to pull it out. A neighbor pulled out his almonds.

The hot, dry San Joaquin Valley became cotton farms around the turn of the century, when water flowed from the north through fields of alfalfa and then through strawberries and grapes. Almonds took over when prices rose. And with increasing demands on the surface water flowing through the river – for example to maintain rivers or to flush seawater from the California delta – farmers increasingly turned to the water beneath their land.

It provides 40 percent of the water for California’s agriculture in a normal year, and far more in dry years. In parts of the state, especially in the San Joaquin Valley, at the southern end of the Central Valley, more groundwater is being withdrawn than nature can restore.

“There’s no getting around it,” said Eric Limas, the son of farmers who now runs one of the most drained irrigated districts called Pixley, a chessboard with almond plantations and dairies. “The numbers are just not right.”

The aquifers are so depleted that farmers are now investing millions of dollars to sink water into the ground. They are buying land that can hold the rain. They create ponds and ditches, carve up the landscape again in order to restore the groundwater that has been wasted for so long.

“This is the biggest adjustment to the water system we can do – get more water into the ground,” said Ellen Hanak, director of the Center for Water Policy at the Public Policy Institute of California.

Meanwhile, towns in the Central Valley are running out of municipal water, including Teviston, south of Mr. Limas’ office, where city officials have been supplying bottled water to 1,200 residents for nearly two weeks.

From almond trees to solar systems

Mr Woolf took over his father’s Huron-based farm in 1986, retired most of the cotton his father grew, switched to tomatoes, and bought a factory that turns his tomatoes into tomato paste for ketchup. Its operation extended over 25,000 hectares. His most valuable harvest: almonds.

Mr. Woolf now sees the next change coming. The rice water from the north doesn’t come when he needs it. The groundwater restrictions will soon limit its pumpability.

He tore out 400 acres of almonds. He’s not sure if he’ll be replanting them anytime soon. He estimates that in the coming years it will stop growing on 30 to 40 percent of his land.

He left a field bare to use as a pond to recharge the aquifer and bought land in the north where the water is, near Mr. Fiack’s rice fields. Now he is considering replacing part of his harvest with another source of income: a solar park from which he can harvest energy and sell it back to the grid.

“Look, I’m a farmer in California. The tools we had to deal with the drought are becoming increasingly limited, ”he said. “I have to break a large part of my ranch.”