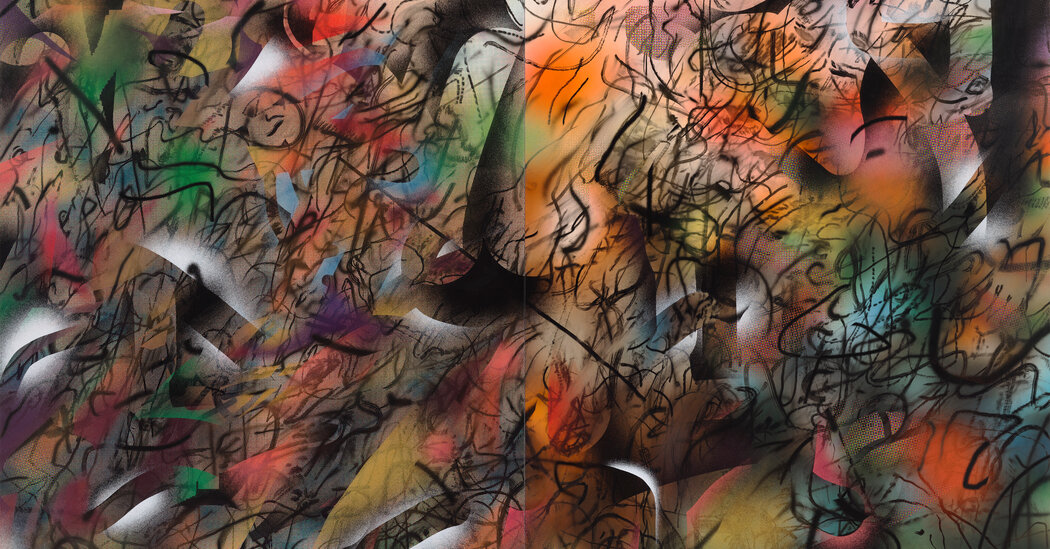 After 12 months of inactivity, you can now feel it in spring in New York: the revival, the river and the river, life again in transit. There’s movement in the city and high-speed action again at the Whitney Museum of American Art, where Julie Mehretu’s sizzling retrospective finally made it to see. It opened at the Los Angeles County Museum of Art in November 2019 and features 25 years of rumbling paintings, drawings, and prints. It has arrived in her hometown almost a year late, but her troubled art has only increased in relevance and power.

Mehretu was best known for large, multi-layered paintings that included architectural diagrams and cityscapes in the early 2000s. Then, about ten years ago, her art took a profound and exciting turn – Painting of gestural, calligraphic abstractions, peppered with unexplained tensions that cause the upheavals of war and the disorder of the climate. She had achieved fame early on. She was faced with a market that preferred to stick to one style. Mehretu moved on, forging a new kind of decolonial abstraction directly in the tradition of Western art.

Meaning is in motion. Culture never sits still. Trade, conquest, reproduction, translation, expulsion, mixed marriage: art takes part in these movements, mutates along the way, acquires new identities when it circulates and relocates. Mehretu’s peripatetic art has all the drama of these global circulations – the flights of people and capital, the spread of viral infections, and political uprisings. And this retrospective, which spans the largest floor of Whitney and is accompanied by a spectacularly learned catalog, is proof of how abstraction can embody multiple rivers without ever settling down, opening up new perspectives on freedom.

Mehretu was born in Addis Ababa in 1970 to an Ethiopian father and an American mother. They immigrated to Michigan later that decade after the military junta known as Derg launched a campaign of terrorism. While studying at the Rhode Island School of Design, she made maps and charts that suggested some sort of demographic analysis, but whose dashes and squiggles never revealed what was being graphed.

Two fascinating pencil drawings titled “Migration Direction Map” from 1996 include dozens of cells and circles overlaid with arrows pointing in all directions. What is migrating? Birds, humans, illegal weapons? All and none of them. What Mehretu began to imagine was the dynamics of the systems in motion.

She came to New York at the end of the millennium and took up an artist residency at the Studio Museum in Harlem. Their work became bigger, more architectural and dealt more explicitly with map making and urbanism. Lines that are accreted in a generally radial configuration, with large arcs encircling a missing central axis and orthogonal spokes sprouting from the core.

Street plans of African capitals or wire frames of apartment blocks and highways, mixed with curved curves and lively scratches. Rectangles and diamonds overlaid the compositions like flags in a stadium or signs at an airport terminal. In a few places she interpolated comic clouds and explosions.

Ambitious, complicated and proudly global, these dense paintings and drawings made Mehretu the breakout star of a loner Harlem gallery called Project and a standout piece in Freestyle, the post-museum’s hotly debated 2001 show about post- black art ”.

Now, 20 years away, I have to say that the early work looks pretty decent. The redesigned surfaces seem to create globalization as a simple surplus. Many appear to be remnants of a 2000 fashion for outdated, unfathomable maps and diagrams made by artists such as Matthew Ritchie, Mark Lombardi, and Franz Ackermann.

But when I started spending time with them again, I still appreciated the seriousness with which she built up an entire painting language (she wasn’t even 30 in the beginning) and how she dealt with hybridity, diaspora and violence without the terrain of the leave abstract painting. She did this primarily through an innovative layering technique that was shown in the Whitney’s studio in two films shot by her friend, the artist Tacita Dean. Mehretu usually began by drawing wire frame outlines all over the canvas, which she then peeled off with a clear acrylic layer that was sanded down to create a new painterly surface. She repeated the process three or four times, saturating each layer with radial lines and geometric shapes. You get a dizzying sense of depth – as if the one-point perspective of Renaissance painting had collapsed from a “window to the world” into a whirlwind of movement and migration.

It took some time, but around 2011 – triggered by the Arab Spring, which seemed so hopeful this year – Mehretu began to break new ground. First in her huge panorama “Invisible Line” and then in the dramatic “Mogamma” quartet, she eliminated the orbital axis that structured her early work. Instead, she overlaid wire-frame drawings of New York, Cairo, and Addis Ababa with forests of short, sharp, free-drawn lines made with a watery black sumi ink used in East Asian calligraphy.

Now freed from the strict radial structure of the early paintings, the innumerable traces of water coagulated into swarms that seemed to blow from one corner of the painting to the other. The stamps were corpses in Tahrir Square or confiscated financial markets. They were crow murders; There were clouds of tear gas.

She painted current crises as a physical experience, free from the obligations of narrative, and as she did so she became confident enough to make the architecture disappear. The images grew darker, more trembling. The markings became bolder, more physical; even her own handprint appeared. In the breakthrough series “Invisible Sun” (2014), longer and more calligraphic black lines came together to form raven-like wanderings that streamed through impressive gray erasures. (Mehretu’s black line is a miracle, as self-confident and unmistakable as Schiele’s trembling contours.) It is as if, after years of translating cities and buildings into abstract forms, she had discovered that entire urban systems were already embedded in her lines.

There is something dramatic about the way this show, curated by Christine Y. Kim from Lacma with Rujeko Hockley from Whitney, builds on the abstractions of the past seven years. Now the backgrounds begin as JPGs from news websites – catastrophic images, riots or forest fires or refugee camps – that become illegible in Photoshop. She covers those murky, hot-colored floors with these nifty black lines and spots, as well as with airbrush splashes of white or red and multi-colored halftone dots that form a bridge between image and information.

These new paintings are no less invested in movement and mixing than the early work and are much more volatile. The clean, centripetal choreography that once stood for the global has given way to contaminated currents and waves. And their deep overlay of printed, stenciled, and handcrafted markings suggests that data, like ink, can be a painterly tool. This is a concern that she shares with numerous abstract painters such as Jacqueline Humphries or Keltie Ferris and that builds on the explorations of Jack Whitten and Albert Oehlen, who translated both brushstrokes back and forth between canvas and digital tools (Whitten with a Xerox machine , Oehlen with an early laptop).

Whitney’s wall text draws heavily on Mehretu’s hidden source material, revealing that it began with an ethnic cleansing document, which was a demonstration by white supremacists. It’s not about riots or forest fires, however, any more than Monet’s haystack is about farm fodder, and they shouldn’t be treated as a Magic Eye game. First and foremost, they are abstract paintings. Her strength and excitement relies on innumerable inputs, and in these paintings the burning Grenfell Tower and the gestures of Chinese calligraphy are not easily separated.

It may sound strange, but despite her success and attention to her cosmopolitan sources, Mehretu has repeatedly been underestimated as an abstract painter. Your achievement goes not only through urbanism and protest, but also through acrylic, ink, spray guns and tracing paper. In the catalog, however, the artist rightly complains that “my work was largely left out of conversations about abstraction, from ‘Painting 2.0’, from the dialogue with other abstract painters, even outside the history of queer abstraction.”

Although her art has sold for millions at auctions, she has had to grapple with the minimizations that occur with certain artists. We still grant the unmarked artist (white, male, heterosexual, local – none of them is referred to as “identity”) full creative freedom and complete accounting with images and ideas. The tagged artist (black, female, queer, immigrant) usually gets a lesser job hired by our museums and collectors to provide a cheerful survey of their assigned group or digestible criticism of past mistakes.

If the Whitney retrospective is of particular value to young artists, it is Mehretu’s utter refusal to accept such a pared-down role. The new pictures show her way of working more slowly than before. They are more haunted and far more difficult. Their mass overwhelms all attempts to fix the artist’s own position within a neo-colonial matrix. They demand attention to shape and long minutes of looking. And even then – here is their fun and political strength – they will not divulge all of their secrets.