Home Home KAWS on the Brooklyn Museum: A Coming-Out Get together 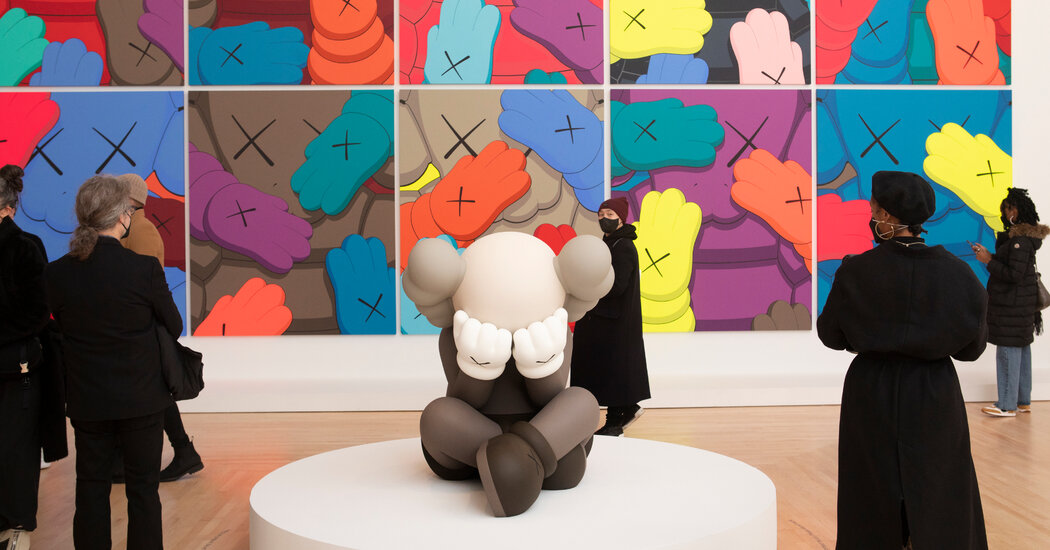 Marshall McLuhan suggested that art is anything you can get away with. Warhol, who was so knowledgeable about appropriation that the quote is often attributed to him, proved McLuhan right. Since then, many artists have accepted the idea as a personal challenge and exhausted the appropriation of its thrill. Entire fashion companies are based on this. People like what they know.

Brian Donnelly, 46, who has worked at KAWS since the mid-1990s, found this out early on. He began populating walls and billboards in his hometown of Jersey City with his kinetic graffiti label. The spray paint lettering alternated between jagged and bloated (the word “KAWS” has no deep meaning; Donnelly chose the letters because he liked the way they looked together). At some point along the way, it became a market heavyweight that was popular with street art enthusiasts as well as high octane collectors.

KAWS: WHAT PARTY, a quick and accurate synopsis of Donnelly’s 25-year career, open to the public on Friday at the Brooklyn Museum, is perfectly titled. Donnelly’s dominance is nearly complete – his grumpy sculptures guard office lobbies and waterfront condos in Midtown and have been brought into space – so it’s somewhat surprising that this is his first major museum poll in New York, a coming-out party after the Did. Much of this delayed reception has to do with the prickly feelings his work instinctively generates, with the artist’s acidic edition viewed as the ultimate triumph of bad taste. This position is likely to be exaggerated or at least incomplete.

“WHAT PARTY”, curated by Eugenie Tsai, comprises a total of 167 objects. It starts with Donnelly’s early road works, which are the most interesting to see. By the late 90s, he’d landed on his imagery and swapped his labeled label for a cartoon character with X-ed eyes and swollen crossbones that he stuck in the skull and used on fashion advertisements in phone boxes and bus stops in New York. It was a less sour offshoot of the Situationist criticism popular at the time with groups like the Billboard Liberation Front, which altered outdoor advertising (e.g. camel cigarettes) to reveal their cunning. Donnelly’s interventions are largely apolitical, an extension of the graffiti artist’s desire to be seen rather than something particularly anti-capitalist.

They were also his cunning, unsanctioned collaborations, the faces of DKNY and Calvin Klein models replaced with the artist’s own avatar. While early graffiti stars relied on trains to get their names out there in public, Donnelly realized that brands were a much more effective channel. His growing portfolio of collaborative ventures with billion dollar companies may seem like a betrayal of his early work, but the idea of ​​”sell-out” once viewed by some members of the Donnelly generation as a fate worse than death , no longer applies. From today’s perspective, these interventions are more like auditions.

One of the first pieces in “WHAT PARTY” from 1997 is the most instructive: A picture of Keith Haring drawing on a subway ad while one of Donnelly’s cartoon snails wraps around him and looks over his shoulder, like taking notes. Haring, who shared the goal of the graffiti authors to achieve maximum visibility, wanted to make his art as democratically accessible as possible, mainly through public murals, but also through the pop shop, where he sold inexpensive reproductions and tchotchkes. The KAWS project is effectively Haring’s Delirium.

The world of KAWS can be confusing, a bizarro version of our own populated by Donnelly’s cartoon appropriations – familiar, but not, all with X’s where their eyes should be, which in cartoon tradition means death or at least one Means state of incapacity to act. The Simpsons, Snoopy, and the Smurfs are all here, floating through a joint state that refuses to lift. Donnelly worked as an animator for a while and his fluid lines and crisp colors in cartoons are clear, but his conceptual breakthrough came in 2000 while in Japan when he discovered that cultural products like “The Simpsons” transcended language works like an emotional Rosetta Stone.

Donnelly’s “Simpsons” work is one of his most commercially successful and least modified from the source material, although Donnelly was not entirely allergic to formalistic experiments: his “Canvas” series on canvas (2001), four examples of which are here, offers one single “Simpsons” character who has been blown up and cropped so that its functions resemble abstractions. They play with ideas of cool, calm color field painting and hard-edge with their sharp, clear shapes and are particularly reminiscent of Al Held’s alphabet pictures from the 60s, which emerged from advertising.

“WHAT PARTY” offers the opportunity to marvel at “The KAWS Album” (2005), a version of the “Simpsons” gag, itself a parody of the Beatles “Sgt. Album cover of the Pepper’s Lonely Hearts Club Band. (His painting was published in 2019 auctioned off for nearly $ 15 million.) Generous read would be the ability to say something about how burping in images of mass culture renders them meaningless, at worst highlighting the need for a property tax.

In Japan, Donnelly also first encountered the otaku culture, whose followers have an angry appetite for manga and anime, and the collection of the related characters that has become a kind of shadow market. He began expanding his practice with his enduring characters Companion, a skull head figure with Mickey Mouse’s puffy gloves and bloated stomach but otherwise full of color to add to toys. Chum, a Michelin Man mutation; and BFF, who looks like a fiery, excommunicated muppet. They have all proven to be infinitely fertile and are molded into 8-inch vinyl and 8-foot fiberglass, among other things. Most of the time they appear alone, in states of dejection and existential malaise, though they are sometimes paired, as in “Gone” (2018), a six-foot-tall companion wearing a limp, cotton-colored BFF, à la Michelangelo’s Pietà, for one Effect that is both funny and stupid.

The cognitive dissonance of these grave subjects, rendered in the cheerful, zippy language of animation, could explain their attraction to young men who are at home in solitude and anonymization and who appear to represent a large portion of Donnelly’s true believers. His fans will undoubtedly find the register of the work more palatable, wrapped in a comic-book coating. (Sometimes, as in two examples here, a character’s side is sanded, a persistent metaphor for emotional exposure). The companion work shows little friction. Instead of upsetting the viewer, they offer comfort and affirm the correctness of their nihilism.

There is also a room devoted to the work done last year to fight the pandemic: “Urge”, a suite of 10 roughly square canvases, disembodied hands dangerously close to touching a face; “Separated”, a sculpture of a companion figure, wrinkled in a heap, face in hands; and “Tide,” a Companion painting floating in moonlit water and possibly drowning. The pictures are luminous, their rich pigment seems to glow from within. But for the most part, as a comment on the current moment and its amazing loss, they feel superficial. Her mood is sullen, but so is everything else.

“WHAT PARTY” positions Donnelly as a bridge between art, popular culture and trade, as if these places were isolationist states and not symbiotic parts of a totalizing machine with flattened taste, in which cartoons and artists are interchangeable content that can be printed on anything with Luxury has to do with accessories for sneakers for the mass market. Donnelly has crossed over at all points, from Nike and Uniqlo to Comme des Garçons and Dior (the most terrifying of these are the chairs made in collaboration with Estudio Campana: plush toys shaped into a modernist fever dream). His productive participation in the art-fashion industrial complex, which gives consumer goods a cultural appeal and gives the artist unparalleled notoriety, is not as important to his practice as the whole point. The decision to host a KAWS exhibition is less an act of courage than a sure thing.

The museum’s rotunda will showcase Donnelly’s latest large-scale sculptures, including his “Holiday” project, a series of massive inflatable companions that have been touring Asia on a kind of soft-power good-will tour to Victoria Harbor in recent years from Hong Kong and loll at the foot of Mount Fuji.

It seems appropriate that a gallery of KAWS’s most monumental works be fed into a gallery-sized gift shop, a monument to its merchandising prowess. It’s not difficult to think of the store as an extension of the show. This is the quality that makes people restless, the shine of everything too smooth. The art world prefers its whispered commercial qualities, its best, worst-kept secret – what is an art gallery if not a business? Donnelly’s work is an attempt to reveal the hidden machinery of conglomerate art, but the work’s strengths are also its weaknesses. It was probably not Donnelly’s plan to become the conglomerate.

Tried Hack of R.N.C. and Russian Ransomware Assault Take a look at Biden