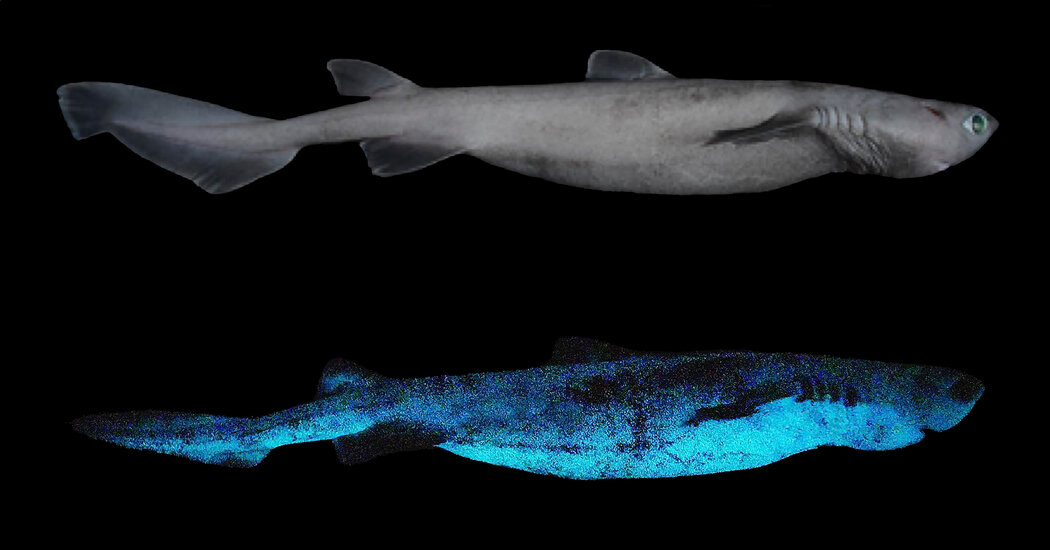 As they roam the oceans, sharks don’t just hunt. Some of them are glowing. And now researchers have identified the largest, glow-in-the-dark species with a spine – on land or at sea – ever found.

The study was led by Jérôme Mallefet at the Catholic University of Louvain in Belgium, a scientist who built his career studying bioluminescent marine life. His most recent collaboration with researchers there and at the National Institute for Aquatic and Atmospheric Research in Wellington, New Zealand, was based on an annual survey off the New Zealand coast. This project scanned depths of up to 2,600 feet to document the numbers of the hoki, a white-fleshed fish that supports New Zealand’s largest commercial fishery.

While the survey was fishing for fish, Dr. Mallefet and colleagues started catching sharks that could survive the drastic change in pressure due to the lack of swim bladders. Live sharks were transferred to tanks in a dark, cold room where the team photographed them, including the dragon shark’s spectacular luminosity. After the vivid photography, specimens of the three shark species were euthanized, with skin samples prepared so that the researchers could examine their flashlight-like luminous organs.

Tiny lantern sharks were already known to be glowing impostors. Blue-green bioluminescent organs on their belly help them blend with bluish light from above so they cannot be spotted by larger predators, while they may illuminate shrimp and octopus on the ocean floor – their dining table. A glowing chassis also advertises the reproductive organs of the partners. As a multi-purpose master, Dr. Mallefet Lantern Sharks MacGyvers of Light.

He had previously discovered that the organs that produce light in sharks, unlike many other bioluminescent organisms, are not controlled by their nervous system. Instead, chemical tests showed that the sharks’ light is regulated by the hormone melatonin.

“It makes us fall asleep,” said Dr. Mallefet, “but it lights the shark.”

His team tested melatonin and other hormones on skin samples from lantern sharks and kitefin sharks during the survey and confirmed that melatonin activates their bioluminescence while other hormones turn them off, although more untested hormones may contribute. What triggers the effects and control of these hormones has yet to be deciphered.

Bioluminescence is a complex trait that has evolved independently more than 90 times in a wide variety of organisms, including bacteria, fungi, fireflies, fish, squid, and jellyfish, explained Emily Lau, a PhD student at the University of California at Santa Barbara 2020 a review of the evolution of bioluminescence and was not sent to Dr. Mallefets involved in study.

Bioluminescence is a biochemical reaction that relies on luciferins, small molecules that react with proteins called luciferases to create light. Precise recipes for lighting up differ between organisms. “Nature as a hobbyist has found these different solutions to generate light,” said Ms. Lau.

Although she called the new research exciting, she found that the underlying biochemistry of the shark’s hormonal on and off switch remains unknown.

Dr. Mallefet also acknowledges these remaining secrets. And while delighted to have photographed the largest known glowing shark, he hopes to solve more puzzles in the ocean.

“There are glowing creatures of various sizes down there, maybe even bigger than dragon sharks, which we don’t know about yet,” he said, adding that with the increasing use of resources in the deep sea, it is time to close this ecosystem beforehand we investigate destroy it.