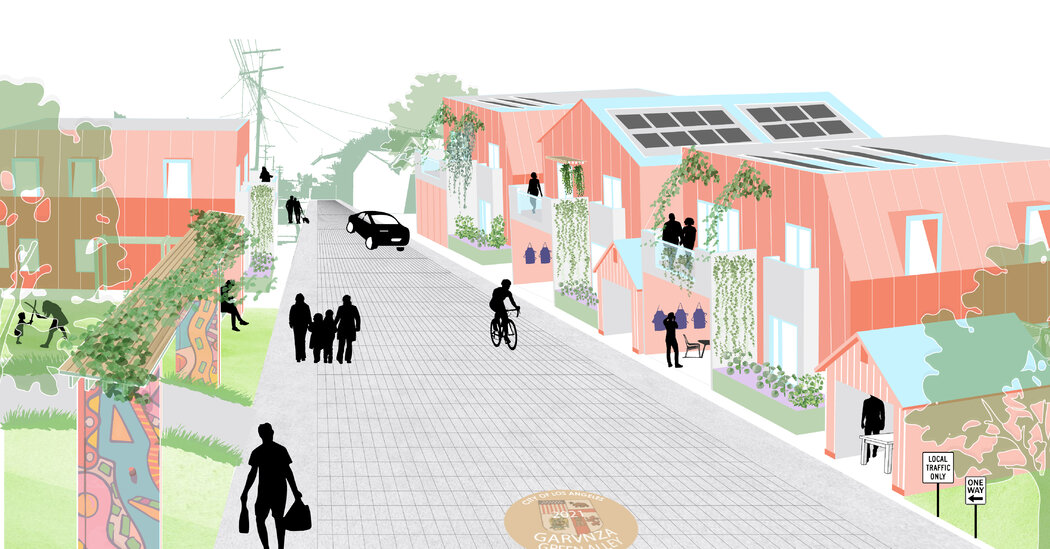 Can California’s largest city – and possibly America’s least affordable – reshape its way out of the housing crisis?

This is the question posed by an architecture competition sponsored by the city “Low-Rise: Housing Ideas for Los Angeles”. The winners were recently announced.

The city’s housing problem lasted for decades. Half a century ago, Los Angeles was a booming metropolis with a population of up to 10 million. It pioneered low-density buildings with fourplexes, bungalow courts like Horatio West Court, Irving Gill’s modernist masterpiece, and dingbats: those campy, stuccoed walk-ups on stilts with pseudonyms like Casa Bella and Camelot.

But housing development in Los Angeles in the later years of the last century matched that of many other American cities, where density was equated with urban decline, and white residents resorted to redlining and other racially restrictive practices to keep blacks and immigrants away. The policy of slow growth, in the case of Los Angeles fueled primarily by the fear of Manhattanisation, put a brake on the construction of apartment buildings. Single family homes became the norm. Based on its highway system and an environmentally forgotten mythology of the desert as endless terrain for exurban expansion, Los Angeles had shrunk its zoning to 4.3 million people by 2010.

Today the region has the fewest apartments per capita of any metropolitan area in the country and the second lowest rental vacancy rate of any major metropolis. According to Christopher Hawthorne, the city’s chief design officer, more than 75 percent of the city’s residential land, which represents more than 400,000 parcels of land, is for single-family homes.

And with droughts, forest fires and climate change, the preponderance of single-family houses, which promote urban sprawl and cars, not only exacerbate the housing shortage, but also the ecological insecurity of the region. Meanwhile, neighbors like Culver City and Santa Monica – who create jobs without building new homes for the influx of workers – are increasing housing pressures in Los Angeles.

More than half of Angelenos are renters today, and nearly half of tenants spend at least half of their income on housing. This goes well beyond the federal definition of unaffordable housing (with more than a third of household income being used for housing). And it correlates with an increase in homelessness.

Local authorities have recently poured billions into a public transport system and, with promising but limited results due to zone restrictions, pushed an affordable housing incentive program for transport-oriented communities that encourages the construction of apartment buildings near through stations. In his latest city budget, Los Angeles Mayor Eric M. Garcetti pledged $ 1 billion to help fight homelessness. And the city has acquired around 20 motels and other properties to convert into subsidized housing.

Of course, the residents of single-family houses do not want to do without their backyards and picket fences. And many have rudimentary, often unfounded fears of endangering the value of their real estate. At the same time, the police killings of African Americans and subsequent nationwide protests have exposed a history of racism and real estate.

And with the pandemic, many single-family homeowners suddenly realized the realities of housing insecurity and the restrictions of zoning rules that forbid going to a neighborhood pharmacy or living in flexible apartment buildings that make working life easier and an alternative to commuting.

So where is the middle ground?

In 2017, California lawmakers took a step in the right direction, streamlining the permitting process for building secondary homes – ADUs, or granny units, as they are also known: garage apartments, backyard cottages, and studios added to existing homes. ADUs are cheaper to build and rent than most other apartment types, so they’re an obvious and relatively easy way to increase your housing stock. They now make up more than 20 percent of new homes in Los Angeles. To expedite their production, Hawthorne recently commissioned a number of pre-approved ADU designs that allow Angelenos to avoid bureaucratic limbo when negotiating with the city’s Department of Construction and Safety.

Hawthorne, a former Los Angeles Times architecture critic, worked with Mayor Garcetti’s Office of Budget and Innovation to develop Low-Rise, a project that ties in with the Case Study House Program that Arts & Architecture Magazine organized after World War II, to develop new paradigms for home design in Los Angeles.

“Low-rise” applicants had the task of not inventing sky utopias, but pragmatic, communal plans for duplexes, fourplexes and mixed-use multi-pilot corner developments that could hypothetically and very modestly be condensed into the city’s single-family houses.

Unlike the plans for ADUs, none of the low-rise proposals can actually be built under the city’s current single-family zoning laws – and the forces opposed to changing those laws remain impressive. Two years ago, Los Angeles City Council members voted 12-0 against SB 50, a state law to increase zoning in a purely ceremonial move that reflects the influence of an anti-development coalition that is rampant in other cities Housing costs arose. In the case of Los Angeles, the coalition brings together NIMBY homeowners from the affluent Westside who worry the development could weaken property values ​​with unsafe tenants in underserved neighborhoods who fear it will lead to evictions.

I can think of no greater obstacle to solving America’s homelessness and affordable housing crisis than this coalition.

“Low-Rise” is not about influencing NIMBYs that cannot be influenced, but rather aims to show Angelenos who have legitimate concerns about their place in the future visions of the city, such as communities designed for them , could look like.

The competition staged listening sessions with local residents. The participants – there were almost 400 – had to hear what the residents were saying. The jurors included developers for affordable housing, architects, tenants and city officials.

Essentially, they wanted to revive a legacy of low-rise, multi-family architecture. Carolina A. Miranda, the art and urban design columnist for the Los Angeles Times (who grew up in one of these apartment complexes in the city in the 1970s) summed up the logic behind “Low-Rise”: “We’ve been dense all along . Now we just have to do better. “

The winners produced various examples of how better can look. A proposal by Brooklyn-based architect Vonn Weisenberger featured a series of green-roofed gabled houses with prefabricated cores and modular apartments that share a shaded courtyard. The design mixes folk allusions to the old bungalow yard and the classic ranch houses by Cliff May. The plan provides for a common room or commercial space on the ground floor overlooking the street, so that the residents of the neighborhood can walk to a grocery store on the corner, for example Pick up milk instead of driving somewhere.

Another plan from Studio TAAP, a young team from Austin, Texas, is to develop a corner development with communal kitchens to keep construction costs down and support multigenerational households that suffered from the mismatch between their desired living conditions and an anachronistic dwelling during the pandemic designed to serve increasingly outdated notions of nuclear families.

In the “Subdivision” category, Luisa Van Leer and Antonio Castillo add maisonettes at the rear of single-family homes that lead to alleys in the center of the block (Los Angeles has about 900 linear miles of them) that could be built little by little if more maisonettes are being built.

And Los Angeles-based Omgivning and Studio-MLA won the Fourplex category of the competition with a project called “Hidden Gardens: A Balance Between Inside and Outside”. These are two-story houses with bedrooms on the ground floor and light-flooded living rooms and kitchens on the upper floor, which are illuminated by cantilever windows and open onto trellis balconies. Footpaths and bike paths meander through meadows and vegetable gardens. A recent study by McKinsey suggests that fourplexes are the most cost-effective apartment buildings to be built from scratch in Los Angeles, and therefore best suited to producing affordable low-rise buildings in meaningful numbers.

Who knows? The architecture in “low-rise” can at least stimulate a conversation. The Los Angeles Mayor’s Office is now working with the Department of City Planning to determine how ideas from the competition can be incorporated into updates to the city’s residential and community plans.

Los Angeles is a more complicated case. But it is also the capital of reinvention.

In the second half of the last century and early this century, Los Angeles County fell a million homes behind its population growth after becoming a one-family mecca thanks to federal highway subsidies, subsidized mortgage loans, some ingenious modern architecture and the mythology of the pool , the garden and the individual – essentially a vision of paradise intended primarily for whites.

But that is the ultimate point of low-rise. The city has made itself anew once before.

It can do it again.