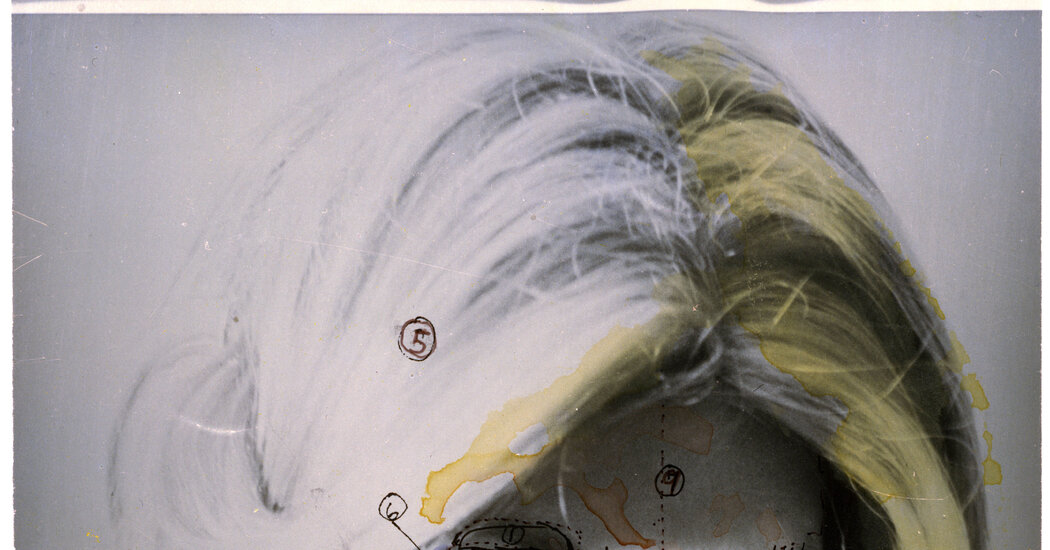 For me, and I suspect many others, the pandemic has led to a lot of thought about different aspects of my life. First and foremost is my dependence on technology, which I found particularly stressful last year. At some point, after months of social isolation, punctuated by video calls and Twitter binge-ups, I felt like I was losing my mind, as if my ability to differentiate between the virtual and the physical world was diminishing. It was a strangely intriguing and frightening feeling that I remembered recently after seeing Lynn Hershman Leeson’s exciting and intense solo show “Twisted” at the Neues Museum.

Hershman Leeson, a pioneering new media artist and filmmaker who spent most of her life in San Francisco after growing up in Cleveland, has pondered our connection to machines since the 1960s. Starting with more traditional forms such as drawing, painting and collage, she made wax sculptures, then videos and works of art using laser discs, touchscreens (in the 80s), webcams, artificial intelligence and, most recently, in collaboration with scientists, a water purification system and DNA.

As a woman doing experimental work, often about female identity, Hershman Leeson has been sidelined by mainstream art institutions for decades. In 2014 she had a career-changing retrospective at the ZKM Center for Art and Media in Karlsruhe, Germany, and five years later her work was the centerpiece of a group exhibition in the shed. But “Twisted” is her first solo museum exhibition in New York City – and she turned 80 in the week before it opened.

The exhibition, curated by Margot Norton, helps correct her marginalization: it’s a strong, shrewd poll that gives her overdue credit. It also feels limited and at times cramped, leaving a lot out, while basically squeezing too much into a single floor. The show feels like a greatest hits album to me: an excellent introduction for newcomers and a dose of reliable inspiration for those familiar with their work, but not deep enough to be immersed in their brilliance.

Hershman Leeson is perhaps best known for “The Electronic Diaries” (1984–2019), a decades-long project that is played in a gallery on the ground floor of the Neues Museum. In it, she videotaped herself speaking about her life, especially her trauma. The process served as a type of therapy that gave her the opportunity to find herself and see the nature of identity through the lens of a camera in general. The works (currently there are six parts) are downright eerily visionary, both for how they anticipate the advent of confessional postings on social media platforms and for some of their early, astute observations. “I think we have become a kind of society of screens, from different layers, that keep us from knowing the truth,” she says, “as if the truth is almost unbearable and too much for us, just like ours” Feelings. “

The Diaries gives a sense of Hershman Leeson’s style and concerns before heading up to where the exhibition is concentrated. Both chronologically and thematically, the show focuses on a central motif of its practice: the relationship between technology and the self. Around the time she took up this idea, the artist, then in her mid-twenties, was pregnant and was hospitalized with life-threatening heart disease. She made drawings and collages of people whose insides were filled with equipment – a way of visualizing the hidden functions of the body and perhaps imagining a mechanical means of warding off death.

Dozens of these early pieces (more than necessary) are stuck on the walls of the first room, but they are primarily of interest as historical documents. Aesthetically, they cannot keep up with the “breathing machines” nearby. These ingenious and enchanting sculptures consist of cases with eerie wax casts of female faces. Their presence triggers an audio track, be it the coughing and breathing of “Butterfly Woman Sleeping” (1967) or the unnerving monologue of “Self-Portrait as Another Person” (1965), which asks: “What are you afraid of?” And says: “I feel very close to you.” The idea of ​​being seduced by a machine is reflected in Hershman Leeson’s work, as is her interest in audience participation and her exploration of how gender norms shape women’s particular associations with technology.

Soon after, Hershman Leeson began a radical exploration of identity. Starting in 1973, the artist spent five years creating a character named Roberta Breitmore, who she also played in the real world. Hershman Leeson studied psychology and did a backstory for Roberta, making diagrams that describe the body language and makeup she used to transform into the character. The artist went out as Roberta and expanded her personality through experience. Roberta got a driver’s license, opened a checking account and went to see a psychiatrist. She had a strong handwriting and kept a diary. At one point, Roberta placed a newspaper ad for a roommate, and a man who responded to it tried to get her to join a prostitution ring.

Roberta documents “Twisted” in detail, from photos to clothing to a psychiatric examination. (The doctor suggests “a simple schizophrenic state”.) The archive begs the fundamental question of what elements are a person made up of. Which are also necessary, which are superfluous and who decides?

Though decidedly analog, Roberta worked almost like a digital program or machine. It developed on the basis of inputs from society – inputs that were so often negative that the artist ended the project with an exorcism. In a way, Roberta was a model for the gender interactivity that Hershman Leeson explored in other works in the Neues Museum.

One of them is “Deep Contact” (1984-89), a video disc and touchscreen piece that is reminiscent of a book about choosing your own adventure, only with darker situations. The journey begins with following the admonitions of a blonde in a sexy dress who shouts: “Touch me”. The other is Agent Ruby (1998-2002), who is described as an “artificially intelligent web agent with a female personality” that you can talk to online and who gets smarter as you get involved. In both cases, the technologies are portrayed as female characters who seem to have more control than the passive Roberta. They’re like more soulful, less obedient versions of Siri and Alexa.

If “Twisted” makes one thing very clear, it is Hershman Leeson’s foresight. Not only did she find ways to leverage advanced technology, but she also saw how they shaped us. Her video “Seduction of a Cyborg” (1994) resembles a parable: a woman who cannot see receives doses of electronic waves that destroy her immune system and turn her into a computer-addicted cyborg. In six short minutes, before social media hit, Hershman Leeson predicted the state of my pandemic-ridden brain.

“The Electronic Diaries” contains a loophole: the artist discontinued it at the end of the 1990s and started it again about 20 years later. The exhibition does not make the same strict break, but it makes a corresponding leap, from a past of now obsolete technologies to a present more futuristic. These appear in three new projects, including “Twisted Gravity” (2021), a series of luminous panels connected to two water treatment systems developed by Harvard. Female figures are etched into plastic, and while the water is being cleaned, the figures pulsate in neon colors. As beautiful and hopeful as it is, “Twisted Gravity” lacks the tension that defines the artist’s best work: a deeply double-edged view of technology that can seduce and deceive us, but also give us the opportunity to transcend ourselves.

The new project that continues the dichotomy is “The Infinity Engine” (2013 – ongoing), a multi-faceted exploration of bioengineering and genetic modification. The Infinity Engine comprises three galleries and contains a range of materials including video interviews with leading scientists, a bio-printed ear, genetically modified fish that glow in the dark, and two pièces de résistance: an antibody named after the artist, developed with Dr . Thomas Huber and a vial with her artistic archive converted into DNA, made with Bill Peck. The installation is something of an overwhelming mess: Hershman Leeson presents the results of their research, but I longed for more of a structure or story to understand. I’m happy to hear about the evolution of goats with spider genes in 2002, but without further context, I don’t understand the implications.

“The Infinity Engine” represents Hershman Leeson’s recent turn from media to science and from a speculative, intimate tone to evangelistic miracle. The more time you spend on it, the more continuity there is – and not just because the bio-printed ear mirrors the wax face fragments she made in the 60s.

Bioengineering deals with questions that Hershman Leeson has been asking all along, about what makes us human and what it looks like to create or change life. Once, Caleb Webber, a scientist she interviewed, rhetorically asks: “Who do we want to be in the future?” The line stuck with me. It is a trend-setting study of the artist’s career – and after six decades she is still providing answers.