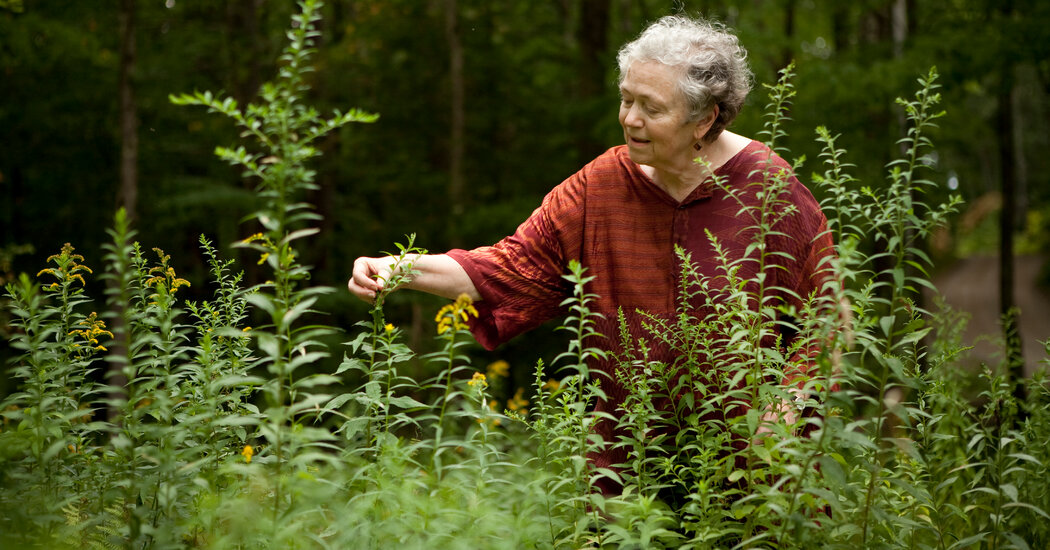 Mary Catherine Bateson, a cultural anthropologist who quietly wrote groundbreaking books on women’s lives and was once one of America’s most famous babies as the only child of Margaret Mead, died January 2 in Dartmouth, New Hampshire when she was 81.

Her husband, J. Barkev Kassarjian, confirmed the death in a hospice facility. He did not give the cause, but said she had a fall and brain damage earlier in the week.

Dr. Bateson’s parents, Dr. Mead and Gregory Bateson, an Englishman, were celebrated anthropologists who fell in love with New Guinea while both studied the cultures there. (Dr. Mead was married to someone else at the time.) They treated their daughter’s arrival as almost more fieldwork, documenting her birth on film – not a typical 1939 practice – and recording her early childhood with the intent of recording it Use The footage is not only used as home video, but also as teaching material. (Dr. Bateson’s first memory of her father was with a Leica camera hanging from his neck.)

Benjamin Spock was her pediatrician – she was often the first baby of Dr. Spock – and his famous books on childcare – drew from the teachings of Dr. Mead.

Still, it wasn’t her childhood, her parentage, or her scholarship – an expert in classical Arabic poetry, as polymathic as her mother – that made Dr. Bateson made known; It was her 1989 book “Composing a Life,” an examination of the stop-and-start nature of women’s lives and their adaptive responses – “Life as an improvisational art,” as she wrote.

In the book, Dr. Bateson uses her own story and that of four friends as examples of ambitious middle-aged women. (She was 50 years old at the time of writing.) All five had lived long enough to suffer loss, motherhood, sexism, racism, career setbacks, and betrayal. In Dr. She had been ousted Bateson’s case as dean of faculty at Amherst College, Massachusetts in an apparent backroom deal organized by male colleagues. It hurt her at first; It would be years before her anger blossomed.

The book was written with dry compassion and the keen eye of a scientist, and in its own way became a nondescript blockbuster and touchstone for feminists. Jane Fonda hailed it as inspiration, as did Hillary Clinton, serving as First Lady Dr. Bateson invited them to advise.

“Reading” Composing a Life “made me clench my teeth and cry,” wrote Ms. Magazine author and co-founder Jane O’Reilly, underlined every other corner of the page in 1989 in the New York Times Book Review Passages with such ferocity that my desk was speckled with broken pencil tips. “

The findings in the book, wrote Dr. Bateson, “started with an angry reflection on my own life as a kind of desperate improvisation in which I constantly tried to make something coherent out of conflicting elements in order to adapt it to rapidly changing attitudes,” as if they were rummaging wildly in the fridge to prepare a meal for unexpected guests.

Mary Catherine Bateson was born on December 8, 1939 in New York City. Her father was in England at the time; As an avowed atheist, he sent his wife a congratulatory telegram with the instruction: “Not Christians.”

Mary Catherine was raised according to the rituals and practices her parents observed in her field work, including breastfeeding on demand; Her mother would meet with Dr. Advise Spock. Dr. Mead was so committed to keeping records that when Mary Catherine was in college and wanted to throw away her childhood art, she declared she had no right to do so.

Mary Catherine grew up in Manhattan, mostly living in the first floor apartments of two Greenwich Village townhouses owned by Dr. Mead, one at a time, with friends who lived on the upper floors. Since Dr. Mead was often away from home for work – or worked at home full time – this was a comfortable form of living: Mary Catherine could be looked after by a full bank of unofficial siblings and their parents if necessary, as well as an English nanny and her teenage daughter.

Dr. Mead’s household techniques were also new: at home she cooked and ate dinner with her daughter, but skipped the dishes so as not to waste time that could be better spent with Mary Catherine or her work. Day after day, the dishes piled up in dizzying verticals “like a Chinese puzzle” and waited for a maid to arrive on Monday, as Dr. Bateson recalled in an earlier book, “Through a Daughter’s Eye: A Memory of Margaret Mead and Gregory Bateson (1984).

The memoirs are a loving, yet sober portrait of two very complicated people. “One of the parts of the household I grew up in,” wrote Dr. Bateson diplomatic, “was that there was no clear line between objectivity and subjectivity, that observation does not preclude participation.”

In his review of the book in The Times, Anatole Broyard noted that Dr. Bateson “made the picture of her childhood and her parents almost as sophisticated as she did”.

“We are used to writers and poets giving us their colorful or hyperbolic versions of their fathers and mothers,” he continued, “but Miss Bateson, born in 1939, is both a behavioral scientist and a writer with considerable literary skills.”

Mary Catherine attended the private Brearley School in Manhattan. At the age of 16, after seeing her mother attend a lecture by Dr. Having accompanied Mead, she stayed behind and spent part of the year in a kibbutz studying Hebrew. Over the years, she also learned Classical Arabic, Armenian, Turkish, Tagalog, Persian and Georgian, the latter because she thought it would be fun.

She joined Radcliffe at 17, studied Semitic languages ​​and history, and graduated in two and a half years. She had Dr. Already met Kassarjian, a Harvard graduate student, but promised her mother that she would not marry until she graduated from college. She has her Ph.D. 1963 in Linguistics and Languages ​​of the Middle East at Harvard; Her husband graduated there with a degree in business administration.

At the beginning of their marriage, she and Dr. Kassarjian in the Philippines and then in Iran after leading Harvard graduate institutes in those countries. Dr. Bateson found work as an academic and anthropologist and learned Tagalog in the Philippines and Farsi in Iran to do so. They lived in Iran for seven years until they were driven out by the revolution there in the late 1970s and had to leave most of their possessions behind.

Dr. Bateson has taught at Harvard University, the Massachusetts Institute of Technology, Brandeis University and Spelman College in Atlanta, among others. On her death, she was Professor Emeritus of Anthropology and English at George Mason University in Virginia and a visiting scholar at the Center on Aging & Work at Boston College.

Dr. Bateson has published a number of books on human development, creativity, and spirituality, including “Composing Another Life: The Age of Active Wisdom” (2010).

Alongside her husband, their daughter Sevanne Kassarjian survived. her half-sister Nora Bateson; and two grandchildren.

When she died, Dr. Bateson on a book called “Love Across Difference,” which was about how the diversity of all stripes – gender, culture, and nationality – can be a source of insight, collaboration, and creativity.