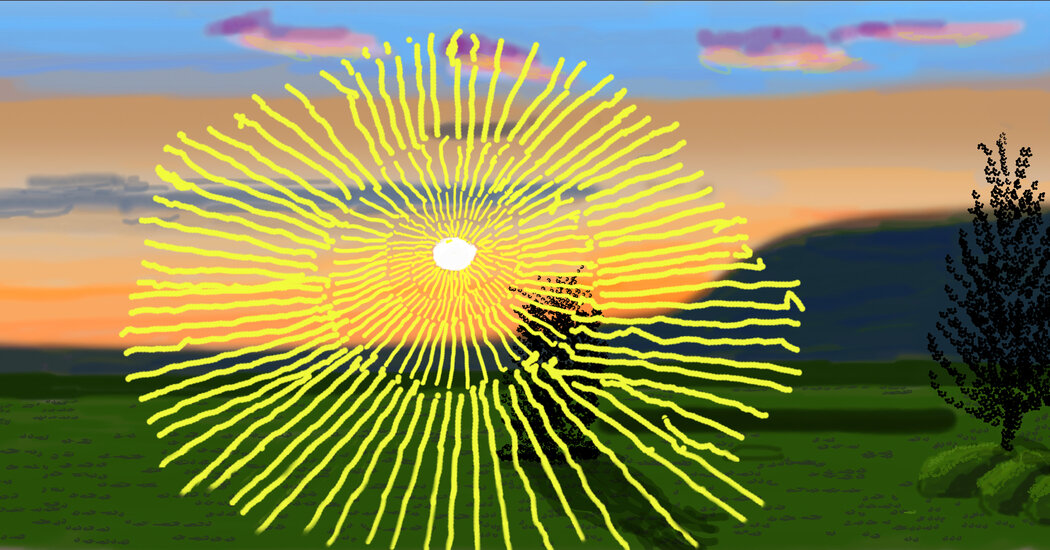 In May, two suns appear in four cities – of course the real sun in the sky, but also the chrysanthemum-like depiction in a video by British artist David Hockney. The two and a half minute animation will be broadcast on digital billboards in Times Square in New York and in prominent locations in London, Tokyo and Seoul.

Hockney’s beginning of a new day in a colorful landscape springs from his early morning experience looking out the kitchen window of his home in Normandy, France, where he has lived since 2019, carefully observing and creating art from his surroundings.

The announcement of the new digital work, “Remember You Can’t Look Long at the Sun or Death” suggests that the animation can be interpreted as a message of hope about emerging from winter – or from pandemic lockdowns.

The rollout of Hockney’s sunrise, which he created on an iPad, is orchestrated by CIRCA, a digital platform designed by British artist Josef O’Connor for a prepandemic Times Square Arts, the public art arm of the Times Square Alliance. Since October, CIRCA has been broadcasting works of art on Piccadilly Lights, a curved billboard in Piccadilly Square, London.

In New York, Times Square Arts will include Hockney’s animation in its long-running Midnight Moment series and play it on 76 screens at around 7:00 p.m.

The clip will air at different times in the four cities and can also be viewed on the CIRCA website.

83-year-old Hockney started experimenting with an iPad in 2010. Previously, he was widely recognized for working in an amazing range of media, including messy media such as paint and charcoal.

He can see the benefits of using a tablet, including “no cleaning required,” he said in an email interview. “And I can always draw in no time.”