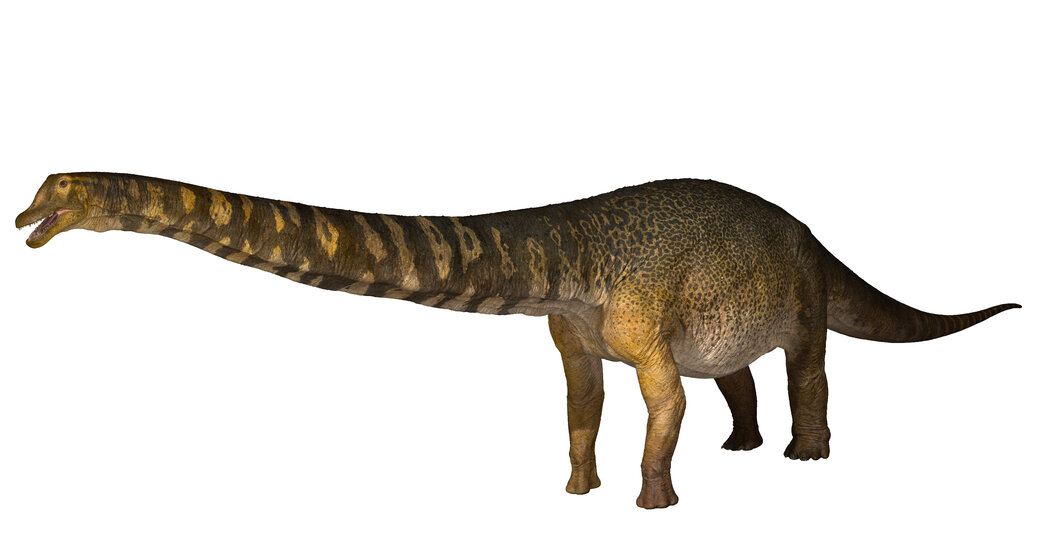 Robyn and Stuart Mackenzie, who were riding a motorcycle on their huge sheep and cattle ranch in the Australian outback one day in 2006, discovered a pile of what looked like large black rocks.

Researchers in Eromanga, Queensland, where the Mackenzies live, said Monday they identified the new species and named it Australotitan cooperensis. Nicknamed Cooper for a stream near the fossil site, it was a long-necked, herbivorous titanosaur that lived in the Cretaceous more than 90 million years ago. Like the brachiosaurus, the titanosaur belonged to a group called sauropods, which were the largest of all dinosaurs.

Although closely related to three other titanosaur species discovered in Australia, Australotitan was significantly larger. It is estimated to weigh about 70 tons, two stories high, and about the length of a basketball court, making it comparable in size to the gigantic titanosaurs found in South America. The researchers’ results were published in the journal PeerJ on Monday.

“This is our first hat in the ring, so to speak, to be promoted to the major titanosaur dinosaur leagues around the world,” said Scott Hocknull, paleontologist at the Queensland Museum in Brisbane and co-author of the study. “We’re pretty excited because this is just the beginning of what we believe is a new wave of discovery of very large dinosaur species in Australia.”

Unlike the United States, where dinosaur fossils have been found since the mid-19th

“It’s a very exciting discovery and analyzed in a fantastic way,” said Matt Lamanna, a paleontologist at the Carnegie Museum of Natural History in Pittsburgh who has studied several titanosaurs.

Dr. Lamanna said the study, which he was not involved in, showed that during the Cretaceous Period, “Australian dinosaurs grew as large as the largest dinosaurs we know.”

He also praised the 3D visualizations of Australotitan’s bones, which are so heavy that they require multiple people or even a forklift to move them. The visualizations make it easier to compare bones with other species and “set a new standard for analyzing a giant titanosaur like this one,” said Dr. Lamanna.

Because it is mostly flat and lacks the mountain ranges and canyons that fossils would expose through eroding rock, Australia is one of the toughest places on earth to find dinosaurs. Instead of finding dinosaurs, Dr. Hocknull: “Dinosaurs will find you”.

This is why farmers have proven important by discovering fragments of dinosaur bones that have migrated to the surface of their land. In the black earth there could be “beautifully preserved” bones several meters below the surface, said Dr. Hocknull, but it takes large machines to dig them out. Local communities in Queensland such as Eromanga, a town of around 60 people (which is occasionally moved from Google Maps), have played a key role in fossil recovery.

A dinosaur bone was first found on the Mackenzies’ property in 2004 by their son Sandy, who was then 14 years old. Early on, Ms. Mackenzie said, she and her husband decided that it was best for the bones to stay in Eromanga “instead of being sent to a state museum thousands of miles away.” So they founded a museum themselves.

Neighbors gathered to help. A local earthmoving company provided the excavation machinery, an oil refinery supplied fuel, and others in town offered funds or volunteered.

“We couldn’t physically get the bones out of the ground without the community’s support as they did,” said Mr. Mackenzie, who is also the mayor of Quilpie Shire, which includes Eromanga.

Excavations began in 2007, followed by years of preparation and analysis using 3D scans to compare the bones with those of existing species.

The Eromanga Natural History Museum opened in 2016 and has a mission similar to a natural history museum in the town of Winton run by a nonprofit group called the Australian Age of Dinosaurs. The establishment of such museums is “probably one of the largest citizen science campaigns in Australia, certainly for natural history,” said Dr. Hocknull.

The Mackenzies say significant excavations continue to take place on their property, including one involving bones that may also turn out to be of a new species.

“I will never see this material processed in my entire life, there is just so much of it,” said Ms. Mackenzie, who is now a field palaeontologist, museum director and, together with her husband, co-author of the new course. “So we need this kind of facility out here to keep people busy.”

The museum is changing the way the people of Eromanga think about the future of the city. With the pandemic border closings keeping Australians locked at home for more than a year, domestic tourism has become much more popular, Mr Mackenzie said. He hoped the dinosaur finds in Eromanga would also attract more international visitors after the country reopened, he said.

Dr. Hocknull said the museum also gave Eromanga’s children a first-hand science education that they might not otherwise have access to.

“You’ve probably never been to Brisbane, you’ve never seen the ocean, and yet here you literally have Australia’s largest dinosaur in your back yard,” he said.