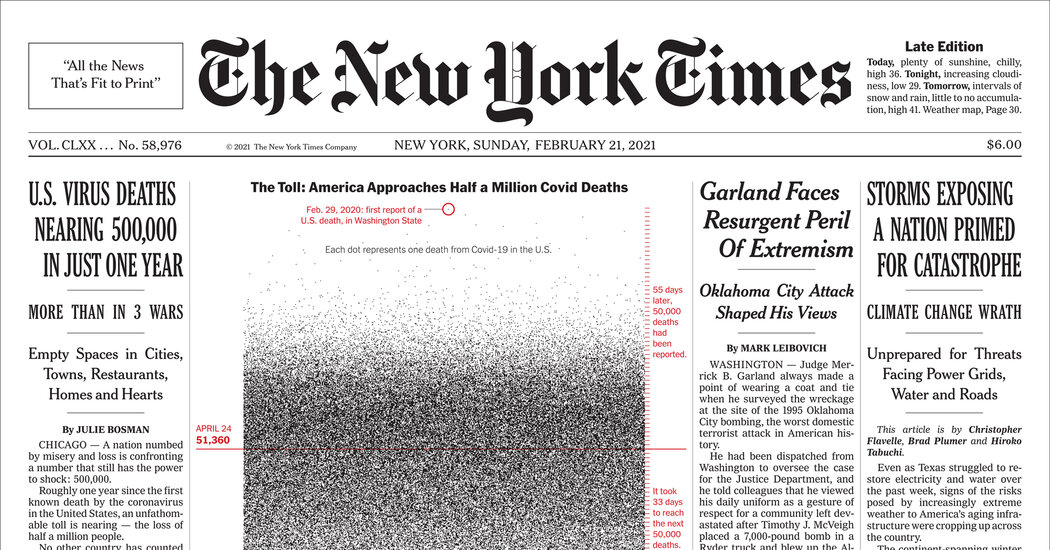 From a distance, the graphic on the front page of the New York Times on Sunday looks like a gray blur, a cloudy gradient that slowly falls into a block of solid ink. Up close, it reveals something much darker: nearly 500,000 individual dots, each representing a single life lost in the US to the coronavirus, marking an amazing milestone the nation will hit in just under 12 months.

A version of the graph was originally posted online in late January, when Covid-19 deaths hit 425,000 in the US after four of the deadliest weeks of the US pandemic. Lazaro Gamio and Lauren Leatherby, both graphics editors at The Times, recorded the dots so that they stretched chronologically across a long scroll, from the first reported US death almost a year ago to the current number of often thousands of victims per day.

On Sunday, half of the front page was devoted to the graphic, with nearly half a million dots running the length of the page and across three of its six columns. The prominent property in the print edition conveyed the importance of this moment in the pandemic and the entirety of the devastation.

For Bill Marsh, a printmaking coordinator who oversaw execution, the digital concept worked just as well in print. “The fact that with half a million dots we can create something that is visible and readable in one piece on a piece of paper that people can scan and think about – it’s made for printing in a way,” he said. “It seems natural for the front page.”

This page was used to visualize the breadth of the pandemic. When Covid’s deaths hit 100,000 in the United States last May, the page was filled with the names of those we’d lost – nearly a thousand of them, just 1 percent of the country’s toll at the time. And as that number neared 200,000, the main photo on the side showed an artist’s courtyard in Texas filling his lawn with a little flag for every life his state lost to the virus.

In contrast to the previous approaches, the graph on Sunday shows all deaths. “I think part of this technique that is good is that it overwhelms you – because it should,” said Mr Gamio.

Since the outbreak of the pandemic, the Graphics Desk has been working continuously on what the editors internally refer to as the “status of the virus” to provide visual elements that capture the crucial moments of this story. The goal of this particular visualization was to add context to a fluctuating number of deaths: April 2020 felt like the sky was falling, Gamio said, but this winter, according to the graph, was significantly worse.

“There’s just a certain numbness, I think, normal human nature when this has been this long, but we’ve tried to keep reminding people of what’s going on,” Ms. Leatherby said. “And I think something striking about this particular piece that we wanted to go home is just the speed at which it all happened.”

Transferring these efforts to the print newspaper – a shift led by Mr. Marsh and Andrew Sondern, an art director – was not without its challenges. For one, the task was “just terrifying,” said Mr Gamio. “Every time you do something for the front page, you lose sleep.”

On a technical level, the editors and designers also had to ensure that half a million tiny pixels of the digital concept were correctly printed on the Times’ various presses across the country.

They did two tests. In one – which in retrospect could now serve as a scavenger hunt for eagle-eyed readers – they placed a small dot scatter in the lower corner of an inside page for a Saturday newspaper. In another involving the Times’ printing facility in College Point, Queens, some dots ran on newsprint that was not distributed.

The end product is the latest of several graphic-heavy front pages from the past year that captured not only the pandemic but also the economic, social, and political crises that have plagued the country. In a time of stranger, Marsh said, “Graphics can introduce a whole new way of understanding what is happening.”

They can also speak as powerfully as words with the gravity of our time, said Mr. Gamio. “We are in an exceptional news moment,” he added, “and the newspaper’s visual language should reflect that.”