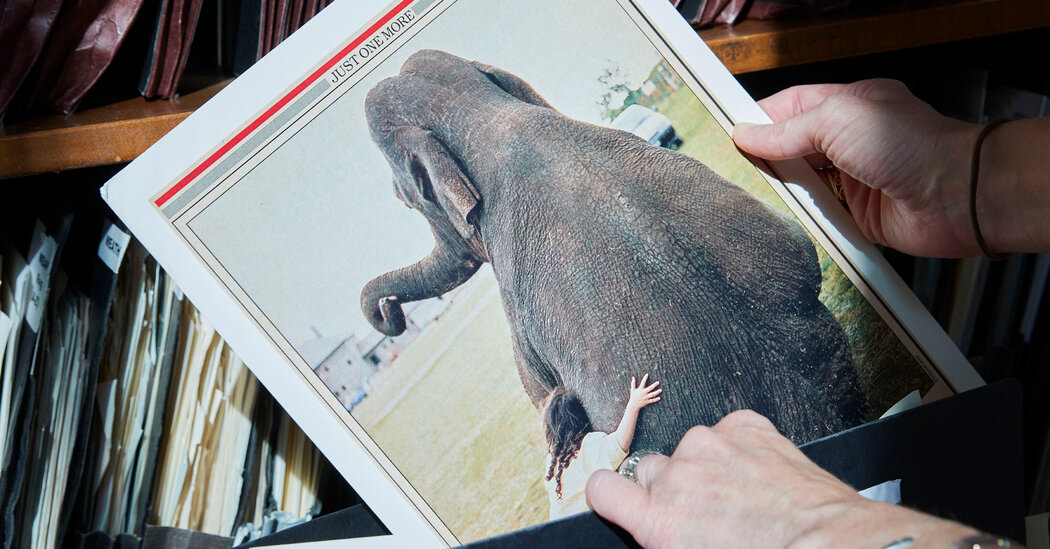 The artist Joseph Cornell once asked for a picture of a street child with a white cockatoo.

Andy Warhol borrowed hundreds of pictures for inspiration – and never returned them.

For more than a century, the New York Public Library’s collection of images has flourished gloriously but precariously as a shape-shifting outsider within a Dewey decimal grid. Founded in 1915, the collection gives library users images looking for an overwhelming range of visual information: prayers, fairies, exhibits, rear views – more than 12,000 rubrics from abacus to zoology, a story of taste that is still growing. The files are organized by subject and can be browsed on open shelves.

“You see people go through it and touch it and you have the spontaneity of discovery,” says Taryn Simon, the concept artist who has been photographing the treasures of the picture collection for nine years and making collages that are currently on view at Gagosian. “It’s so multidimensional. It just keeps swirling. I see it as a performance piece or an installation. “

Well, in a development that Simon passionately complains about, the library management has decided that the holdings will be archived until the beginning of next year and that they will only be made available to visitors if they expressly request it.

In the long-standing tension between accessibility and preservation, the restorers have prevailed, who do not want to accept the inevitable wear and tear of borrowed pictures due to wear and tear or theft. “Either it’s ephemera and doesn’t belong in a research library, or it’s an archive that should be preserved,” said William P. Kelly, director of research libraries, in an interview. “We’re trying to turn it from an outlier and satellite into an integral part of the collection.”

Once the image collection has moved, its space in Room 100 will house administrators hired for educational work. This reorganization harbors a sad irony, because public relations was the passionate mission of Romana Javitz, who was appointed curator of the collection in 1929 and who for almost four decades defined and defended it against those who thought that the hodgepodge of vernacular imagery did not belong in the Library.

As an immigrant from Minsk, Russia, Javitz cleverly remarked in 1940 that “many facts which require hours to be traced in texts can be discovered quickly and easily by consulting with pictures”. The collection was created as a collaboration between the research of the librarians and the demands of the public. With democratic equality, Javitz and her staff answered inquiries from curious nobody and established artists. (Although they made concessions to the artists. When Warhol did not return borrowed paintings, Javitz accepted that they were hired to produce art and did not pursue him.)

She answered inquiries with the same polite care, whether they came from an anonymous inquirer about “Peg-Leg John” (did he want the real abolitionist Peg Leg Joe or the fictional pirate Long John Silver?) Or from Joseph Cornell. the master of assembly. Cornell became friends with Javitz, as did many photographers – including Walker Evans, Paul Strand, Lewis Hine, and Dorothea Lange – who were intrigued by the respect she showed for their work.

She was ahead of her time, but the world has caught up with her. That was a mixed blessing for the collection. Javitz had been gifted with hundreds of pictures by Evans, Lange, and other photographers seeking wider circulation of their prints, which had relatively little commercial value. Roy Stryker, who headed the Farm Security Administration’s photo project during the Depression, donated over 40,000 prints to the photo collection.

But after Javitz retired in 1968, the status of photography as an art form rose with rising prices. Thousands of extraordinary artistic or historical photographs were brought from the circulating picture collection to the Kupferstichkabinett, where they combined with Dürer’s woodcuts, Hiroshige prints and Goya etchings. “You’re not coming here to look for Dorothea Lange,” says Jessica Cline, the current director of the picture collection. “You are here to look for life on the farm.”

From movie set decorators to handbag designers, the Picture Collection has long served the creative community. “Somebody was making a movie that was shot in New York around the turn of the century,” said Jay Vissers, one of the Picture Collection’s four full-time librarians who’s been there since 1994. Let’s see how much horse droppings there was on the street. “

The experienced Hollywood production designer Wynn Thomas (“Do the Right Thing”, “Malcolm X”) always starts his research in the Picture Collection. While planning Ron Howard’s 2005 boxing film, “Cinderella Man,” which is set to take place in North Bergen, NJ, he looked dry for visual records. “The librarian suggested that I check the folders from the Depression-era, and especially Chicago 1920-30,” he recalled. Not only did he find images of courtyards that influenced his design, but he also chose a palette of black, gray, and pale colors to respond to the black and white photos from that period.

“When the Mad Men production designers wanted to know what a shopping bag looked like in 1950, they came here,” says Joshua Chuang, senior curator of photography at the library. “I consider this to be the most radical approach to secret layers of visual culture.”

Art Spiegelman, who used the collection while working as a newspaper illustrator – “I would look for a 1930s baseball uniform,” he said – relied largely on it in determining how the characters would appear in his graphic novel, ” Mouse ”, which are humans in animal form. He was particularly concerned about the head-to-body ratio. He went through files of certain animals, children’s book characters, theatrical costumes (the ballet “Tales of Beatrix Potter” was instructive), and anthropomorphized animals in Chinese and Japanese art. He also found pictures for the concentration camps in which the protagonists were imprisoned after his parents Vladek and Anja.

But then he came across a roadblock while looking for pictures of the displaced persons camps that Vladek was in after the liberation. “I was amazed and I went to this librarian and he said, ‘This is difficult.’ Then he paused and said, ‘Try Quonset huts.’ And by God, there it was. “

Today, when an algorithm searches for images on Google on the internet, an algorithm spits out the most popular choices in a self-reinforcing stream of predictability. In the collection of images, the characteristics of human choice determine what you see. “It’s so incredible that the high and the low are side by side,” Chuang said. “It has a kind of chaotic purity.”

The stacks behind room 100 contain rows of recently purchased books and magazines that will soon be cut out by librarians to add to the files. (About 400 images are added every month.) The taxonomy of the files themselves is constantly changing. “Negroes” became “Black — Life” and the most recent additions include “Transgenderism”, “Drones” and, surprisingly, “Friendship”.

“It’s very important that people borrow these things and feed these collections all the time,” Vissers said. “Otherwise it’s like a box in the attic.”

Usage has decreased in the age of the internet, but for its followers, the tactile experience of touching paper images is even stronger now that it is a novelty. “There is no substitute for the excitement of discovering the physicality of something in a room that you hold in your hands,” says photographer Peter Kayafas, who brings his Pratt Institute students to explore.

The fate of the collection may have been sealed in 2017 when it was moved from the circulating Mid-Manhattan branch to the main library. Kelly would like the users of the Picture Collection to be better prepared and less spontaneous in the future. “The model we’re trying to develop is that more information is transparently available online so that they can find it before it gets to the library,” he said.

However, without delivering the jolt and tickle of chance, the picture collection is deprived of its panache. Simon, the artist, said her own experience with the collection – characterized by “wrong surfaces and development and change” – opened doors to the unexpected.

A huge book emerged from their project, “The color of a flea eye: The picture collection”. It contains panels of the photo collages that Simon made in her studio by taking pictures from files that she arranged by hand. There is a rich history of Javitz and the picture collection, including correspondence and a list of all folder tags.

Inspired by the venerable portraits that hang in the library’s Beaux-Arts-Edna-Barnes-Salomon-Saal, Simon designed her photo collages so that they can be hung on visible wires, some of which can be seen in room 100. in the Salomon Room, New York grandees from the early days of the library are confronted with some of Simon’s pictures from the picture collection – from left-wing demonstrations to bare butts – that they might have preferred to keep under lock and key. “When installing, it is very important that they look at each other,” said Simon.

This face-to-face confrontation reminds us that the collection – radically democratic in its wide-open accessibility and its agglomeration of highs and lows – had unsettled advocates of regulation and order from the start.