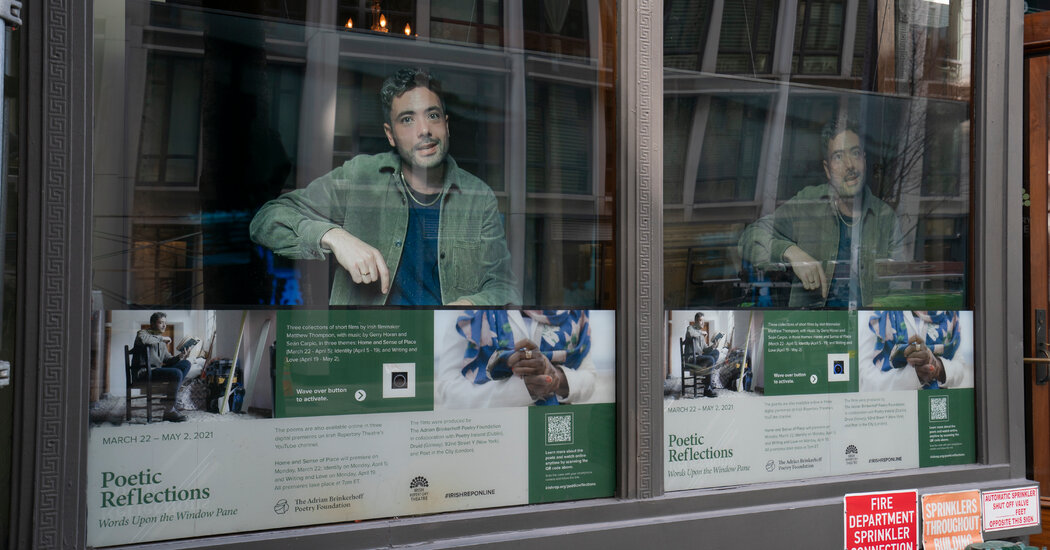 Like many cultural organizations, the Irish Repertory Theater in Manhattan has streamed pandemic programs on its website.

A few days ago, the theater added a new type of broadcast to its repertoire: two 60-inch screens were installed in windows overlooking the sidewalk, speakers were installed high up on the building’s facade, and a collection of films were shown in which people read Poems in Ireland, London and New York.

One recent morning, Ciaran O’Reilly, the Representative’s production director, was standing by the theater on West 22nd Street looking at the screens as they showed Joseph Aldous, a British actor, reading a poem, “An Advancement of Learning” by Seamus Heaney describing a short break with a rat along a river bank.

“These are not dark windows,” said O’Reilly. “They are illuminated with poetry, with music, with the words of actors who perform.”

Over the past year, theaters and other performing arts in New York have turned to creative means of bringing work to the public, and sometimes bringing a bit of life to otherwise enclosed facades. These agreements continue, even though New York state has announced that a third of the art venues will reopen in April and some outdoor shows like Shakespeare will resume in the park.

However, the panes of glass have created a safe space. At the end of last year, for example, the artists Christopher Williams, Holly Bass and Raja Feather Kelly performed at different times in the lobby or in a smaller vestibule-like part of the New York Live Arts building in Chelsea. All were visible to the outside through glass.

Three other performances by Kelly of “Hysteria,” in which he takes on the role of an alien in pink and explores what is called “pop culture and its suppression of queer black subjectivity” on the Live Arts website, are for the 8th through the 20th century Scheduled April 10th.

Another street-level performance took place behind glass in Downtown Brooklyn last December, where the Brooklyn Ballet staged nine 20-minute shows of selected dances from its “Nutcracker”.

The ballet turned its studio into a theater, which its artistic director, Lynn Parkerson, referred to as a “jewel box” theater. chose dances that socially distanced masked ballerinas; and used barricades on the sidewalk to restrict the audience.

“It was a way to bring some people back to something they love and enjoy and maybe forget,” Parkerson said in an interview. “It felt like a real achievement.”

She said live performances were scheduled for April and would include ballet members in “Pas de Deux” with Jean-Philippe Rameau’s “Gavotte et Six Doubles” with live music by pianist Simone Dinnerstein.

Pop-up concerts were organized by the Kaufman Music Center in a store on the Upper West Side – the address is not given but is described as “not hard to find” on the center’s website – north of Columbus Circle.

These performances, which run through the end of April, are announced in the store on the same day to limit crowds and encourage social distancing. Participants included violinist Gil Shaham, mezzo-soprano Chrystal E. Williams, the Gabrielle Stravelli Trio, and the JACK Quartet.

St. Ann’s Warehouse in Brooklyn is showing Julian Alexander and Khadijat Oseni’s “Supremacy Project,” a public art that explores the nature of injustice in American society.

The word “domination” superimposes a photo of police officers in riot gear, and there are photos of Michael T. Boyd by Sandra Bland, Elijah McClain, and Emmett Till.

And at Playwrights Horizons in Midtown, Mexican-American artist Ken Gonzales-Day places photographs of sculptures of human figures in display cases to encourage viewers to expect definitions of beauty and race. These exhibitions are part of a rotating public art series organized by artist, activist and writer Avram Finkelstein and set designer and costume designer David Zinn.

The goal, said Finkelstein in January when the series was announced, was to show works that “use dormant facades constructively to create a temporary street museum” and “remind the city of its buoyancy and originality”.

O’Reilly of the Irish Representative said the theater was heard from last year by Amy Holmes, executive director of the Adrian Brinkerhoff Poetry Foundation, who believed the theater was a good place to show some of the short films the organization had commissioned Make Make poetry a part of an immersive experience.

Featuring contemporary poets reading their own works, as well as poets and actors reading the works of others, including William Butler Yeats and JM Synge, they were created in collaboration with Poetry Ireland in Dublin, the Druid Theater in Galway and 92nd Street Y Produced in New York and Poet in the City of London.

“I think there is something special about encountering the arts in unexpected ways in the city, especially an art form like poetry,” said Holmes.

Readers of the films include people who were born in Ireland, immigrants to Ireland, people who live in the UK, and some from the US, like Denice Frohman, who was born and raised in New York City.

Frohman was on the theater screens Tuesday night reading lines like “The beaches are fenced and nobody knows the names of the dead” from her poem “Puertopia” when Erin Madorsky and Dorian Baker stopped to listen.

Baker said he saw the films in the window symbolizing a “revival of poetic energy”.

Madorsky had been to theatrical performances regularly before the pandemic, but now she’s missed that connection, she said, and was delighted to have a dramatic reading on the way home.

She added that the sound of the verses read contrasted with what she called the city’s “standard” backdrop of booming horns, sirens and rumbling garbage trucks.

“I think it’s wonderful,” she said. “There’s something so reassuring about your voice that it just pulled me into it.”