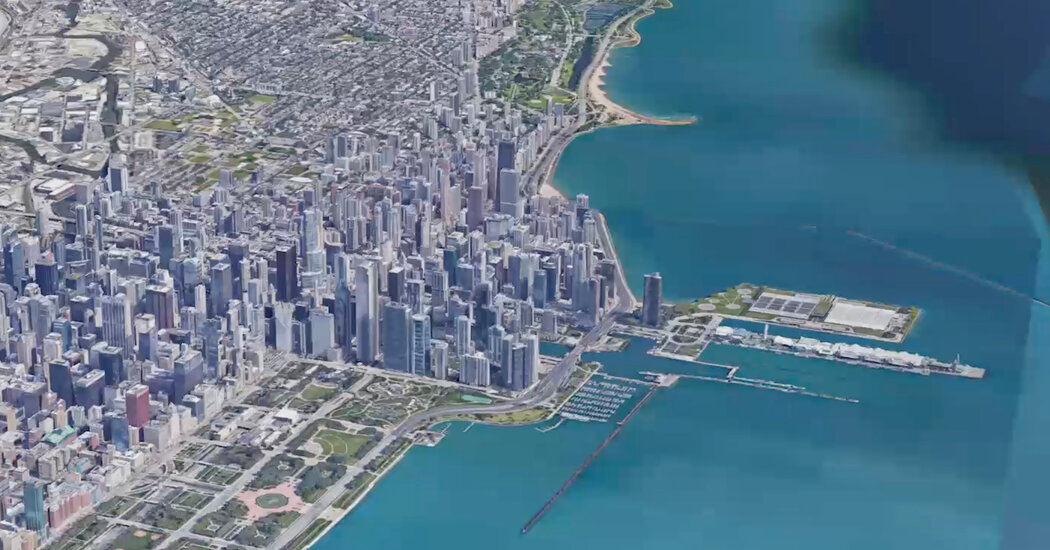 A climatic tug of war is taking place in Chicago, and the city’s signature natural feature – Lake Michigan – is right in the middle of it all. Fluctuations in evaporation and precipitation lead to significant fluctuations in the lake’s water level, which could become serious problems for the 9.5 million people in the metropolitan area.

For the past few months, Midwestern writer Dan Egan has spoken to Chicagoans grappling with the fallout from the imbalanced lake, while photographer Lyndon French ventured into the city’s rainwater tunnels and reservoir system to take shots of the skyline and City architecture from a helicopter. You and a team of graphic editors, designers and editors brought the project to life this month.

In a recent conversation, Jesse Pesta, Assistant Editor of the Climate Desk, and Claire O’Neill, Visual Editor of the Desk, discussed how the project came about, the challenges of photographing visually abstract concepts, and what they hope people will take away.

How did you find this story?

JESSE PARTY Writer Dan Egan is a rock star of Great Lakes journalism. He lives in the Midwest, worked for The Milwaukee Journal Sentinel for many years and wrote the book “The Death and Life of the Great Lakes”. Hannah Fairfield, climate editor for the Times, and I started a conversation with him last year, and he came up with the idea to take a closer look at Chicago. That fits perfectly with the type of climate reporting we’re trying to – surprisingly – tell a hugely important story.

Did you know right away that you wanted to go all out with the visuals, or did you make that decision after seeing his coverage?

PARTY We knew that right from the start of the project. It had history and universality, and we knew this was best seen visually.

What was the hardest part of the project?

CLAIRE O’NEILL Since it spans over a century, the hardest thing to do was to zoom out – there was just so much to edit.

Where did you start

O’Neill The first step was to put together a Google Doc with all the visual options that could accompany Dan’s writing. Then it was a matter of deciding which visuals fit the text best. When can a picture convey something better, more seamlessly or more naturally, and when is it better to just write in words? Multimedia editor Anjali Singhvi has put together a great collection of other visuals – fly-throughs made in Google Earth Studio – as well as other graphics showing rainfall and evaporation rates.

How did you meet the challenge of photographing something with no obvious visual elements?

O’Neill We started with Lyndon’s incredible photography of what is now Chicago. With many climate histories, what you are trying to show is either invisible or what you want to explain happened in the past, such as the way Chicago was built. How do you represent things that are visually abstract or that cannot be photographed at the moment? Anjali’s fly-throughs were great for capturing the city’s skyline and architecture, and we also had these videos showing waves crashing on the Chicago shoreline. And through Google Earth images, we showed a time lapse of the disappearing coastline.

The graphics were ambitious, but the backbone of the story was the reporting.

PARTY It took Dan months to tell and write this story because there are really about four or five stories in one. The story is about Chicago, but it is also a story of the country in which the city later emerged, and goes back half a millennium. It’s the story of how science affects the Great Lakes region. It’s a reconstruction of a surreal day at the river locks when everything went wrong. It is the story of people who are on the lakeshore and are hit by crazy storms.

How did you make sure your story wasn’t too technical for newbies to climate science?

PARTY We are trying to make all of our climate stories universal. We don’t necessarily want to say, “Here’s a climate story”, but “Here’s a story about human ambition or human weaknesses or hubris or the ability to build a city against all odds. “The universal human themes make such a story successful.

What feedback have you received since the story was published?

PARTY I’ve heard from many friends who were born and raised in Chicago who said they missed some of these aspects of the city’s history and the risk involved. Some people said to me, “My joke has always been that at least I can go back to Chicago; rising sea levels won’t take me there! ”Little did they know how endangered Chicago is in its own way.

What should people think?

PARTY None of us can escape the consequences of climate change. We are all at risk in different ways, wherever we may be.