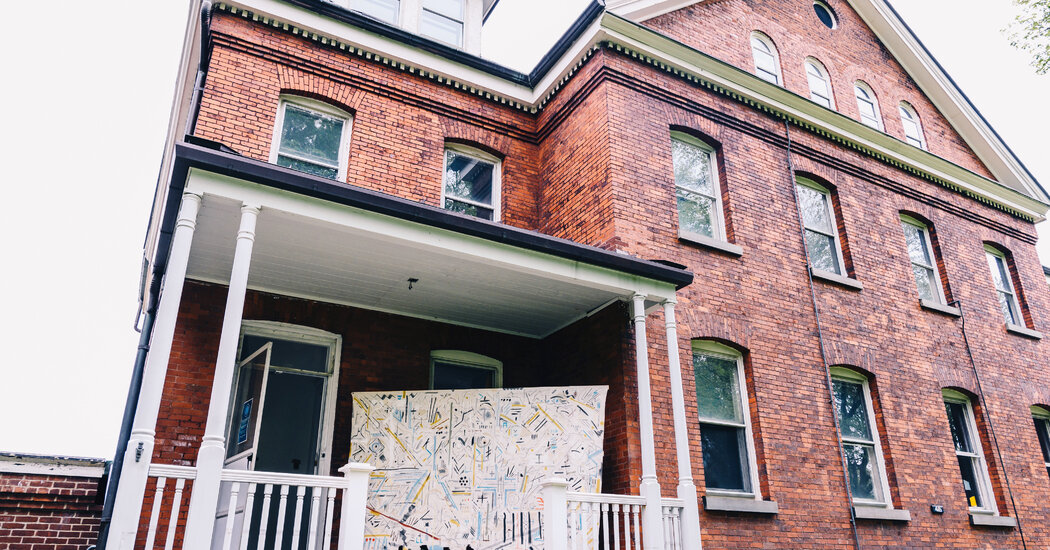 If you’re looking to break away from the greedy, well-known glamor of some of your larger art fairs, there is a little trip away from it all. Check out some relatively unobstructed parts of New York and also rethink the way many things start in the art world – that is, in a grassroots DIY situation, when people take things into their own hands. If you would like VIP services at this event, you will need to bring your own. Snacks and liquids are recommended, and of course sensible shoes. The VIP lounge is a huge green, adorned by tall, royal trees.

I am referring to the “NADA House 2021” which will open on Governors Island in New York Harbor on Saturday and will run until August 1st. Technically, it’s not an art fair, but it remains a vibrant mix of art, artists, dealers and the like organized by the New Art Dealers Alliance or NADA. To get there, you need a short ferry ride from Lower Manhattan or Brooklyn. (The Brooklyn ferry currently only runs on weekends.) An eight-minute stroll – past Castle Williams, an early 19th-century circular red sandstone fortress – will bring you to Colonels Row, a series of stately brick officer’s residences. “NADA House 21” occupies five of them side by side, from 403 to 405 Colonels Row.

NADA was founded in 2002 by younger, mostly New York dealers who are looking for mutual support and an art fair that they can call themselves. In 2019, a gallery open took place on the occasion of the trade fair week and the first “NADA House” show on Governors Island. Covid-19 caused the cancellation of the second trip to Governors Island.

The current “NADA House 2021” features works by more than 100 artists from 66 galleries, curators, and artist-run or alternative spaces from the US and around the world. (Many of the names here may be comfortably unfamiliar.)

It was still in the works as I visited twice this week and rooms were waiting for dealers or artists to show up. What’s already seen is enough to force me to come back to see what eventually lands.

Art is everywhere, in entrance areas, kitchens and pantries, in rooms where people once lived, ate and slept. A collective called switching on decorated all the light switches. These whimsical interventions that occur frequently are always a welcome sight.

Before you get to the houses, you can come across “Luna” by Bill Saylor (Magenta Plains Gallery), an appealing outdoor sculpture that cleverly accommodates his improvised painting style with a multitude of graffiti-like phantasms on five thick, white panels that neatly converge like an eccentric kiosk .

On the porch of 405A, you can be drawn to a large Matthew Kirk (Fierman) painting with his field of drifting hieroglyphics and markings, some of which reflect Kirk’s Native American background. The two-sided canvas is raw and unstretched and is held up by a wooden support on a base made of bricks, cinder blocks, grass and a snail.

As you approach house 403, you will hear “Isla a Isla” (island to island), six short pieces by sound artists and composers presented by Embajada, a gallery in San Juan, PR, starting with a percussion piece by Eduardo F. Rosario, that sounds like a good-humored greyhound.

Directly in house 403 are woody paintings by Henry Glavin and wood sculptures by Colby Bird, including one that appears to have emerged from a painting by Magritte (Halsey McKay).

The landing upstairs is dominated by the muscular realism of Shellyne Rodriguez ‘”La Doña raises her stick” (EFA Robert Blackburn Printmaking Workshop). Pablo Gómez Uribe (Proxyco) has turned a 3-D trompe l’oeil into a workshop with a chaotic pile of bricks and an orderly row of halved bricks made of wooden panels. Everyone is noticeably weightless, even the sledgehammers cover a wall. In another room, the experienced artist Ken Grimes conveys his style of illustration and his obsession with science fiction and extraterrestrial things and pays homage to characters such as Carl Sagan and Arthur Clarke (Ricco / Maresca).

At 404A, in a cloakroom furnished with woodwork by Quintín Rivera Toro, there is a bench with the title “This almond tree will save our country” (Zawahra Alejandro). Textiles speak loudest here. Kira Dominguez Hultgren (Eleanor Harwood Gallery) almost overwhelmed a room with riveting textiles. The monumental “No Dogs Allowed”, a fan-shaped structure made of string and thread, nominated this artist as the heiress of Sheila Hicks.

On the other side of the hall Josie Love Roebuck (Latchkey Gallery) does similar things with embroidery, patchwork, and paint that make great wall hangings. “Magnificently Willful” celebrates her hair, the long strands of which fall like a curtain from the painting to the floor. Nikholis Planck (Magenta Plains) has lined part of the hallway with fascinating little paintings – executed on egg-shaped ovids. On the upper floor, Michelle Rosenberg (Situations) has transformed a cupboard into a magical wonderland of discarded brushes that have been funnily renovated with colorful bristles.

At 404B, the entrance hall, a glove of the bold shield-like paintings by outsider artist Willie Jinks (Shrine), exudes a creative freedom that fades much around it. Ana Bidart’s “Swimming Room” covered the floor with a plastic sheet in bright blue and left the visitors considerable chalk balls to draw with (Galerie Josée Bienvenu). Two cryptic videos are recommended: The poetic “Halo Nevus” by the Welsh-Gambian artist Tako Taal alternates mysterious narrative scenes with close-ups of flooded water, accompanied by fascinating music (Patricia Fleming Gallery). Evan Mast’s “Landscape # 2” is a 9-minute panning shot of the streets and alleys of Taiwan, the concentration of which on parked, covered motorbikes actually conjures up mountains (Brackett Creek Exhibitions).

In the entrance hall at 405A, the paintings by Ricardo Partida (Baby Blue Gallery, Chicago) emit a seductive glow – magenta and turquoise here, orange and dark yellow there. Her subject is usually a lazy young man in flirtatious, traditionally feminine poses. They update German Expressionism and share their no-nonsense style with the work of Jonathan Lyndon Chase, but are not yet that original.

In the dining room, the artist Rachel Libeskind (Gallery of Signs and Symbols) has littered every surface of a large room with cut-out images for “Archive Fever”. It’s an airy, walk-in collage, haunting and lively, like a reinterpreted painting by Joan Miró by Hannah Hoch.

At 405B, Johannah Herr (Geary) creates a meditation on banana republics in Latin America and their support by the United States. It features eye-catching tropical wallpaper centered on portraits of Latin American dictators. A colorful carpet full of guns, greenbacks, and the Chiquita Banana logo, plus a remarkably legible poster grimly tracing the 1954 coup that ended Guatemala’s first democratic government.

“NADA House 2021” shows an organization that is developing into a mixture of exhibition and art fair. It remains an important clearinghouse that reminds us how much the larger art fairs leave out, exposing grass roots everywhere.

Saturday through August 1, Governors Island, 403-405 Colonels Row; 212 594 0883; newartdealers.org. Open on Fridays, Saturdays and Sundays. For ferry schedules and details on how to get to the island: govisland.com/visit-the-island.