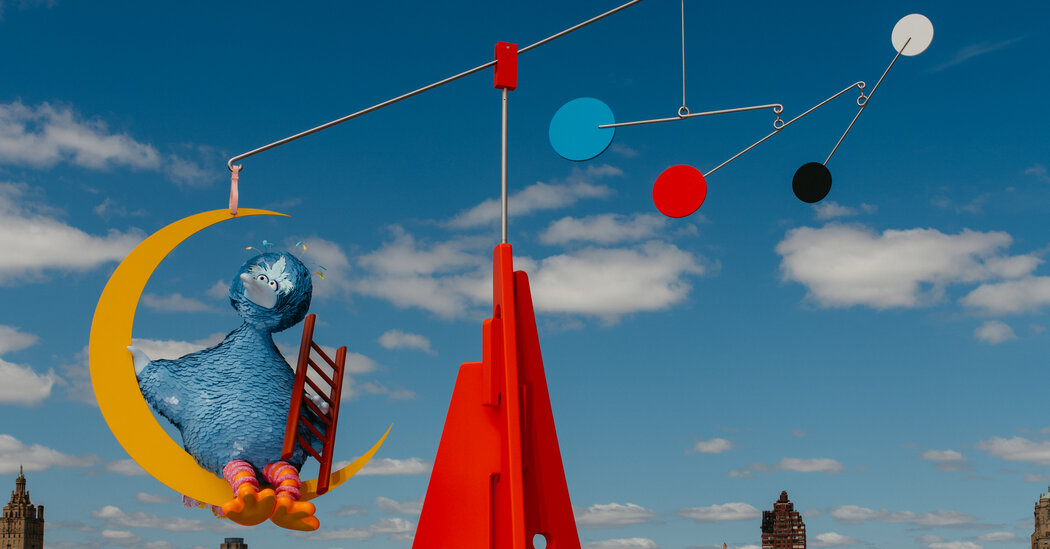 The other day I saw a huge bird sitting on a crescent moon piece. It clung to an oddly short ladder, and the entire scene – an installation by conceptual artist and immersive environment designer Alex Da Corte – was on the roof of the Metropolitan Museum, tucked away in the corner of one of New York City’s most spectacular courtyards.

The piece immediately brought me back to my favorite Italo Calvino short story, “The Distance of the Moon,” about the good old days when the earth and its moon were almost close enough to kiss. The narrator and his friends rowed until the closest approach, set up a ladder, and jumped to the surface of the moon, where they frolicked around collecting cheese.

Da Corte draws on a similar kind of straightforward irony for its 2021 Roof Garden Commission, which opens on Friday. The bird in “As long as the sun lasts” – its title comes from another Calvino story – is a custom-made, blue, but otherwise distinctive, full-size Big Bird, the beloved resident of Sesame Street. Looking wistfully over the oligarchic air south of Central Park, it looks torn, unsure whether to climb back to earth or fly away forever.

Made of stainless steel and covered with 7,000 handcrafted aluminum springs, the bird swings gently on one end of a long pole that is attached about 20 feet above the ground. (The ladder is definitely too short.) At the other end of the pole are five colorful metal disks, an allusion to Alexander Calder’s floating cell phones or at least to the counterfeiting of their kindergartens on the mass market. The base of the installation, three interlocking stainless steel blocks with rounded corners, like modular plastic, are also painted Calder Red.

The Met Roof Commission is not easy to pull away. The artist competes not only with the breathtaking view of Central Park, which is framed by a forest of Manhattan’s luxury towers, but also with the aura of the treasure house on the ground floor. Whatever the artist chooses, it is instantly framed to death in an endless summer bacchanal of selfies. A profitable surefire crowd puller like this one that turns gentle circles without ever getting anywhere may simply be Da Corte’s satirical, if not particularly biting, answer to the assignment: Why try to get anywhere? Why not just give people what they want?

But that wouldn’t explain the undercurrent of melancholy, the pathos of an innocent creature who made a big decision. Da Corte has spent his artistic career being different people – dressing up as rapper Eminem, even adapting Alexander Calder’s signature based on this sculpture – and constructing elaborate installations that make you feel like you have wandered into another world be colorful, but incredibly unrooted.

(The museum received informal approval for the project from the Calder Foundation and Sesame Street.)

Born in New Jersey, he spent his early childhood in Venezuela, where he saw a Brazilian version of “Sesame Street” called “Vila Sésamo”. This show’s Big Bird equivalent, Garibaldo, is blue. But the characters aren’t very alike – if it can be overlooked that they are both anthropomorphic birds – and that bird’s blue isn’t even the same as Garibaldo’s. What this bird hue really evokes, whether you’ve ever seen Garibaldo or not, is a confused memory or “jamais vu” – the opposite of déjà vu, the feeling that something familiar is suddenly strange.

Jamais vu must have been the artist’s experience moving to the United States as an 8-year-old. It has certainly been relentless for everyone over the past year as normal life suddenly became impossible and bizarre new habits – wiping off food, wearing a mask or two – brought in and out of the practice. I suspect most visitors to the Cantor Roof Garden will wonder if this was really what the place was like before the pandemic. (The answer is not exactly: there used to be a roof garden bar.)

A blue big bird is also reminiscent of a disturbing scene in the children’s film “Follow That Bird” from 1985 with figures and dolls from Sesame Street. After two carnival grabbers captured him, locked him up and painted him the color of melancholy, they force Big Bird to play a song called “I’m So Blue” – and then collect the money. As a metaphor for the artist’s relationship to institutions – for example with Da Corte as the innocent sunshine and the Met as his kidnapper – the reference would be too simple. But as an image of the childlike innocence we all learn to hold captive and succumb to the stark demands of adult life, it’s kind of heartbreaking.

Everything about the piece – from the character itself to the graphic shapes and colors of the Calder-like cell phone and the preschool play set base – means a good mood. But recognizing moodily as a viewer is not the same as feeling bizarre. In fact, it can feel like the opposite at times, a deplorable reminder that our days of whimsy are behind us. We have to pay bills, sell products, wage wars, make statements, write reviews. It is not our fault that we can no longer reach the moon. Our ladders are just too short.

The truth is, “As long as the sun holds” addressed me in a visceral way that I felt suspicious of. When I saw a well-known child character in a room still devoted to old-fashioned high culture ideas, I felt like someone was getting away with something. But when the breeze came up and Big Bird started swinging, it was surprisingly exciting. I wanted to go myself. I even grabbed Big Bird’s foot. It was a few inches out of reach.

Alex Da Corte: As long as the sun lasts