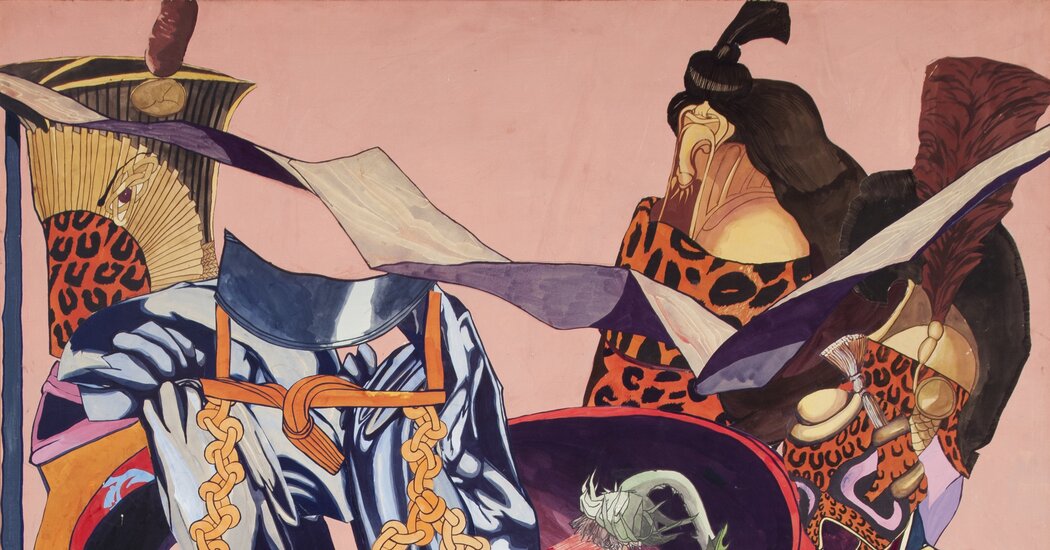 LONDON – Paula Rego is the artist who paints a soldier in a leopard print gimp mask, a little girl shaving her dog and the devil’s wife in nipple tassels.

Despite Britain’s well-known prudish nature, her mischievous scenes have made her a national treasure: in 2010, Queen Elizabeth II made Rego, 86, a lady commander, one of the country’s highest honors. And a major career retrospective at Tate Britain, opening Wednesday, is the third organized by the museum group, after a smaller exhibition at Tate Britain in 2004 and an exhibition at Tate Liverpool in 1997.

The retrospective is the largest exhibition of her work to date in Great Britain, a country where the Portuguese-born artist has lived intermittently since the 1950s. The show, which runs through Oct. 24, comes at a time when the kind of figurative, narrative painting that Rego has embraced has never been more fashionable.

Rego conjures up disturbing images – etchings of dark nursery rhymes like “Three Blind Mice” and portraits of women howling like wild dogs – but it is more her exuberant, otherworldly early work than the somber naturalism of her most recent pastels, which is powerful in the mind.

Born in Lisbon in 1935, Rego was the only child of liberal parents who opposed the regime of the Portuguese dictator António de Oliveira Salazar. When she was 16, her parents sent her to high school in Kent, England, and in the early 1950s she studied at the Slade School of Fine Art in London.

Portuguese society was claustrophobic towards women (who did not get the right to vote until 1976), and Rego’s early works railed against the repressive atmosphere. Tate Britain has “Interrogation” (1950) with two somber legs behind a woman twisting over a chair; “Under Milk Wood” (1954), a rigid painting that transposes the drama of Dylan Thomas’ play of Wales into a Portuguese kitchen; and the angry, chewed up “Salazar Vomiting the Homeland” (1960) with waxy yellow shapes floating over a navy blue background that takes some time to find the promised action of the title.

Collage offered a way out of this brittle way of creating images. From 1960 Rego began to cut up newspapers and magazines as well as his own drawings and layer them on canvas. When you step into the second room of Tate Britain, the power of “Julieta” (1964) and “Manifesto (For a Lost Cause)” (1965) is striking – a vortex of heads and hooves and posters and wings accented against the planes of pop color. Both were included in their first solo exhibition at the Modern Art Gallery of the National Society of Fine Arts in Lisbon in 1965, an exhibition that shocked many of their contemporaries.

In an interview she gave to a friend, the poet Alberto de Lacerda, shortly after the exhibition opened, Rego said she wanted the tangled forms in these hybrid canvases to escape the history of painting as “high art”. As she leaned over her work on the floor (she said she found it “intimidating to have that thing up on the wall and look at me”) she told Lacerda how she felt about “cartoons, newspaper reports, street events, proverbs, Songs, folk dances, nightmares, longings and fears. ”And so she found her artistic voice: the wisdom of what is spoken, sung, and whispered; of rumors and folklore; of idioms passed down through generations.

Animals and adolescent girls became decisive actors in Rego’s fantasy world, and her interest in the Swiss psychiatrist Carl Jung led her to formative experiences that could play out in their adult relationships: in the series “Red Monkey” she paints characters from a toy theater that belonged to her husband Victor Willing to dramatize an extramarital affair. The roughly painted animal avatars tower up in every picture, and it’s hard not to shy away from the violence of a scene like “Woman Cuts the Red Monkey’s Tail” (1981) with even more puke.

The exhibition culminates in a central room with Rego paintings from the late 1980s, which were created when she was looking after Willing during the last years of his life. They are suffocating scenes, lit by the glaring sunlight of a painting by Giorgio de Chirico and permeated by the fetishistic threat of a David Lynch film. Look at the determined look of the daughter in “The Family” (1988), who sits between her father’s legs while she helps him dress him; or the clenched jaw of “The Policeman’s Daughter” (1987) while she polishes her father’s knee-high boots.

Then, in 1994, Rego started using pastel colors and the tone of her work changed drastically. One of the most celebrated works in this medium is a monumental series of images of abortion that she made after the narrow defeat of a 1998 referendum on changing Portuguese anti-abortion laws. In works like “Untitled No. 4 ”(1998-9) girls – some still in school uniform – pucker in fetal positions after illegal abortions.

As lively as this theme may still be, the large-format pastel works do not have the same effect as their more imaginatively painted scenes. All the power and brilliance of acrylic paint are blurred in one material with the dreary associations of amateur portraits or the lustful look of Edgar Degas.

When Rego shows an assistant recreating photographs of hysterical women from the 19th century, it is conceptually interesting but feels subdued and reminiscent of other London School painters, most notably Lucian Freud, who taught at Slade, as Rego studied there.

Every day, give me the oil-on-canvas cast of characters from Snow White (1996) over one of those grumpy, lonely pastel women: the exasperating grown-up face of the princess and the signature stocky calves as she teases and frolics at the hem of her skirt in the midst of fairytale companions.

This is painting with the subversive edge of a contemporary fable, fresh from the imaginative depths of an evil national treasure.