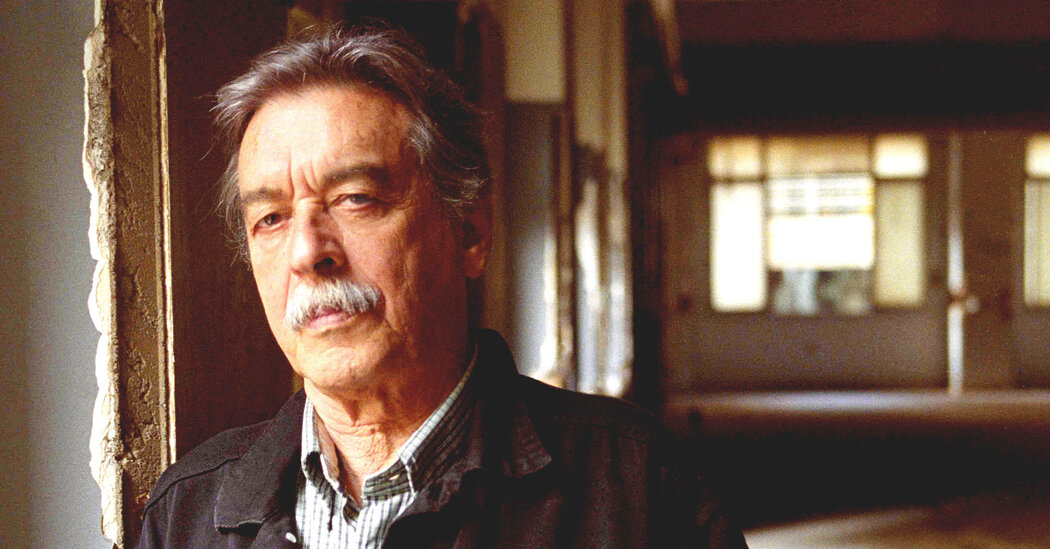 Paulo Mendes da Rocha was only 30 years old when he built his first large building, the Paulistano Athletic Club, in his hometown of São Paulo, Brazil. A huge slab of concrete on wedge-shaped struts made of the same brave material, it looked like a spaceship ready to take off.

It was 1958 and Mr. Mendes da Rocha, the son of an engineer, had achieved a technological masterpiece with modest material and in the service of democratic principles. Although he designed many private homes for wealthy people over the course of his long career, his heart lay with public works.

“All rooms are public,” he often said. “The only private space you can imagine is the human mind.”

An achievement that he would repeat in the decades that followed, even when a military dictatorship came to power in Brazil in 1964 and dispersed his fellow architects, many of whom left the country. Despite being blacklisted for 20 years during the regime’s grim reign, he stayed there. He had five children at the time and loved his city.

Mr. Mendes da Rocha died on May 23rd in a hospital in São Paulo. He was 92 years old. The cause was lung cancer, said his son Pedro.

He was part of the group of architects from São Paulo called the Paulistas, who are known for their socialist ideals and whose collective style has often been defined as Brazilian brutalism. But Mr. Mendes da Rocha was on a lighter note than this label suggests. Many architectural authors called his work “concrete acrobatics”. He called his preferred material concrete “liquid stone”.

When he designed the Brazilian Sculpture Museum, which opened in 1988, he moved a large part of it underground and created a huge public square above it, over which a concrete bridge hovered. During his 1993 renovation of the Pinacoteca do Estado do São Paulo, the city’s oldest museum of fine arts, which was founded in 1905, he glazed the ceilings and spanned the inner courtyards with metal catwalks.

“His São Pedro Chapel, built in Campos do Jordão in 1987, doesn’t look like it should be at all,” wrote Oliver Wainwright, architecture and design critic for The Guardian, noting the chapel’s overwhelming construction : “A strong concrete slab that sits on a filigree glass case – the whole thing cantilevers as if by magic from a single column in the middle of the building.”

Charming, gruff, and intellectually nimble – he could joke in three languages ​​and aggressively preferred the Socratic method in teaching – Mr. Mendes da Rocha liked to say that the purpose of architecture was to support the unpredictability of life. Most of the time he worked in a one-man office, which was marked by the dusty chaos of a shabby town house or old newspaper town room, as Barry Bergdoll, professor of art history at Columbia University and former chief curator of architecture and design at the Museum of Modern Kind of in a phone interview.

He despised cell phones and, even louder, private cars and denounced their size, weight and pollution as a scourge for cities. He preferred to take taxis or walk.

It amazed many that the creator of such complex technological constructions was essentially an analog type.

In 2006 Mr. Mendes da Rocha was awarded the Pritzker Prize, the highest distinction in architecture. He was only the second Brazilian to win the award after Rio-born Oscar Niemeyer, who worked on the United Nations building in New York City and won in 1988.

In a statement on the announcement of the award for Mr. Mendes da Rocha, Peter Palumbo, then chairman of the Pritzker Prize jury, said he had “brought the cheerful panache of Brazil into his work and thus lifted the spirits of all those whose lives” are away touched and many more all over the world who were influenced by the monumentality of his buildings and the raw materials that are his trademark. “

In 2016, Mr. Mendes da Rocha won the Golden Lion for his life’s work at the Venice Architecture Biennale.Recognition…Awakening / Getty Images

He and his father share a Spartan sensitivity and appreciation for simple solutions, said his son Pedro, and a love of the wonders of engineering. He grew up touring the dams and harbors his father designed, and many have noticed how those shapes were incorporated into his work.

He graduated from Mackenzie Presbyterian University in São Paulo with a degree in architecture in 1954. In 1961 he joined the Faculty of Architecture and Urbanism at the University of São Paulo, founded by João Batista Vilanova Artigas, whose muscular architecture shaped the sensibility of the Paulistas. In 1969 he was denied teaching and was only resumed with the so-called amnesty in 1979.

However, during these years he built mostly single-family houses, including his own, and two public buildings: a football stadium in 1975 and the Brazilian Pavilion for the 1970 World’s Fair in Osaka, Japan. The pavilion, a concrete slab balanced on a hilly landscape, has been celebrated at home and abroad. After the mass, the Brazilian military regime had it destroyed.

Mr. Bergdoll, who oversaw an exhibition of Latin American architecture at MoMA in 2015, said Mr. Mendes da Rocha’s style and ethos are in line with those of his colleagues in São Paulo. “They were able to take advantage of the technology and really push it to its limits,” he said, “but at the same time by harsh and rigorous means. It is this cultural rejection of luxury and finish that prevails. “

The so-called Brazilian brutalism of the Paulistas was softer than its European counterparts and flourished in the humid tropical climate with moss and other foliage. Mr. Mendes da Rocha used age-old “technologies” – cross ventilation, thick outer walls – to cool or insulate his constructions. He often placed shallow pools on the roofs.

The house he built for his family in 1964 had cantilevered windows to let the air through. The bedrooms were built in the core of the house, with walls that ended just above the ceiling lit up by atrium windows, all surrounded by a common area like a huge porch. Built on what looked like a berm, it most resembled a futuristic cargo ship.

“Our rooms were like a monastery,” says Pedro Mendes da Rocha, “with just one bed, a desk and bookshelves.” His friends loved staying in his house, he said, “with all of his strange and fantastic solutions “.

Towards the end of his life, Mr. Mendes da Rocha worked less and less privately. He only wanted to build public spaces for his park-poor city and always worried about the treatment of the poor who were crammed into the favelas, the makeshift neighborhoods that surround São Paulo, far from city services.

His last major work was a rerun of a Brazilian institution called the Serviço Social do Comércio – essentially a workers’ club that provides services such as health care, cultural programs, gyms, theaters, and more in one building. In 2017, Mr. Mendes da Rocha transformed an old department store into a dazzling open-plan building with a rooftop swimming pool. But like the building itself, he said, the pool was meant for people, not millionaires. That same year, the Royal Institute of British Architects awarded Mr. Mendes da Rocha his Royal Gold Medal, a Pritzker-like honor, one of many he received.

“He took architecture and ideas very seriously,” said Reed Johnson, the 2007 Los Angeles Times Latin culture journalist who portrayed Mendes da Rocha, “but at the same time he wasn’t cumbersome.” He added, “Every day in this fun and wonderfully chaotic Coming to the office and trusting that you can rebuild the country and culture after that terrible time when anyone with an idea could be thrown into jail is just an incredible achievement. “

“When Niemeyer first thinks of a kind of poetry,” said the art historian Bergdoll, referring to Brazil’s other most famous architects, “for Mendes da Rocha it is a strict graininess and the creation of places that are stages of joy.”