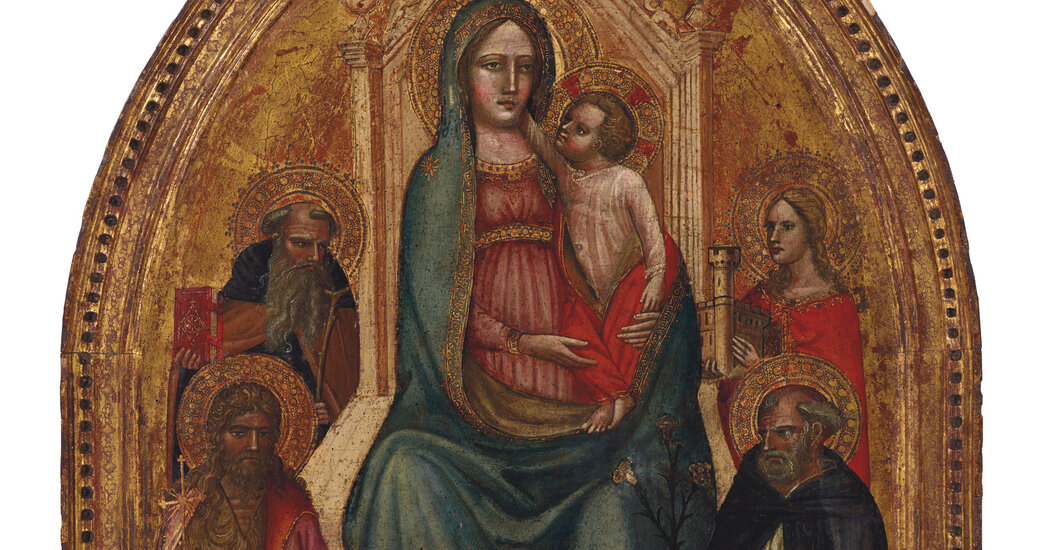 It started as a stopgap measure to respond to the pandemic, a temporary two-year relaxation of the policy by the directors of the Association of Art Museum, which has long banned American institutions from selling art from their collections to pay the bills.

But more and more museums are using politics and the association began to discuss making it permanent. This idea either makes sense or undermines the reasons for its existence, depending on the institution you’re talking to.

The debate has become heated in recent weeks, pitting the museum against the museum and forcing the association – which acts as the arbiter and moral watchdog of the industry – to postpone the talks about extending the change indefinitely.

“We need to take the time to reconsider,” Thomas P. Campbell, former director of the Metropolitan Museum of Art, said in an email. “The decisions we make now will influence the museum industry for decades.”

The longstanding policy – enforced by the Directors’ Association and widely adopted by its members – was that the art belonging to institutions was kept for the public benefit and, as such, should largely be maintained.

Some items could be sold – known as deactivation – but they were supposed to be works of art that were duplicated or no longer suited to the museum’s mission, and the proceeds were to be used to purchase other art, not drawing salaries or other operating costs.

In light of the financial upheaval caused by the pandemic, the association temporarily relaxed restrictions last year, allowing museums to sell works of art to fund the upkeep of their collections.

The problem came to a head last month when the Met recognized it could take advantage of this change in policy, including a direction of the proceeds towards the salaries of those involved in debt collection maintenance.

Museums tend to turn to the Met – the largest in the country – and many are concerned about the idea of ​​using art proceeds to help cover running costs.

But other museums had already announced similar intentions. The Brooklyn Museum has raised nearly $ 35 million from auction sales in the United States and Europe to maintain its artwork.

The Newark Museum of Art announced last week that it would follow suit and sell 20 items from its collection with the help of Sotheby’s auction house.

Erik Neil of the Chrysler Museum of Art in Norfolk, Virginia, who prefers to maintain the stricter policy, says the issue is possibly the most important museum administration issue he has faced as director.

“We are educational institutions,” he said in an interview. “If you want to flip pictures there are many other types of institutions you can do that and they are called commercial galleries.”

The strong disagreements among museum directors were evident last week when the association convened two unusual, mandatory meetings to seek feedback from members on the rules for such sales.

Some expected a vote on whether the currently relaxed rules should be codified. However, members were only asked to take an informal survey asking for advice on whether the museum association should work to develop a new policy that better defines how money from art sales can be used. However, the split vote between 91 and 88 – with 42 non-participating members – opposed the development of a new policy, suggesting that the heated debate is likely to continue.

“This was a preliminary discussion among the members,” said Christine Anagnos, the club’s director, in an email. She said that before April 2022, when the rule expires, she expects her trustees to “consider whether an extension of the April 2020 resolutions is warranted”.

Glenn Lowry, the director of the Museum of Modern Art, has advocated a more aggressive deactivation policy in the past. Speaking to the Washington Post last week, he said, “If over time you release hundreds or thousands of items that could be worth $ 1,000, $ 5,000, or $ 10,000, you know what? That adds up to a lot of money. “

In an email, Lowry said it was a decision for another time to suspend sanctions against using disused funds for other purposes during the pandemic to help art museums once we are out of this crisis and fully assessed which is in the best interests of our institutions. “

It was grumbled that the association’s 21-member board pushed these changes in the Covid era without consulting the full membership of 221 organizations.

Anagnos said that given the “enormous uncertainty at the beginning of the pandemic” the board was being forced to react quickly to the “financial needs of members and to provide targeted opportunities for additional financial flexibility to the institutions that wanted and needed”.

The intensity of the debate has brought the museum association, which has been in existence since 1916, but is largely open to the public, to the fore. Backed by membership fees, which are set on a sliding scale – large institutions are known to pay up to $ 25,000 a year and the smallest around $ 10,000 – the association acts as the de facto tribunal for a museum industry that counts thousands of Institutions count. although only a fraction are actual members.

Your enforcement powers are limited. In the past, it has directed member museums to stop loaning art to institutions or collaborating on programs with institutions that have violated their guidelines. For example, in 2008 the National Academy Museum was classified as a pariah by the association after two key Hudson River School paintings from its collection were sold to pay bills.

It’s hard to say what would happen if the association were to enforce a policy that was unpopular with half of its members, as issues that divided museum directors at this level were rare.

Many have already positioned themselves on both sides of the debate. Campbell, who is now the director and general manager of the San Francisco Art Museums, warned in an Instagram post that “deactivation will be like crack cocaine for the addict – a quick hit that turns into an addiction.”

In a subsequent interview, he said he was “totally in favor of deactivating it if it is used to trim and decorate a collection, especially today when we are trying to increase the space for women and BIPOC artists”.

“Allowing ‘Collection Maintenance’ to be disabled is different as it raises a number of questions,” he added, “from donor trust to responsibility for board members and citizens to questions about whether collections will be classified as assets and lose their taxes Exception status. “

The current director, Max Hollein, was forced to defend the Met’s decision in the press and gave a detailed explanation of the museum’s reasoning on February 17. “I take the impact of our actions on other institutions very seriously,” the statement said. “I also realize that others may have different philosophies. I take the professional view that an intentional deactivation program is appropriate, useful and necessary for an art museum like ours. “

Hollein added that “we have to face this unique challenge from the pandemic” by supporting the Met and its staff, “while taking the long-term perspective on what is best for the museum”.

Several other directors share this perspective, arguing that today’s severe economic challenges call for new creative solutions. “We really need to rethink some of our orthodoxy very carefully so that our institutions can not only survive, but also meet and thrive the demands of our time,” said Anne Pasternak, director of the Brooklyn Museum. “People will say that trustees can pay for it. What planet are you on? Why is it the responsibility of the trustees to pay 100 percent of the expenses for public facilities? This attitude is contradicting at best. It is wrong to believe that every museum has a billboard full of billionaires. “

Still, more than 25,000 people have signed a petition asking the Met to reconsider. “We urge the Met’s board of directors to do the job they signed up for: to give, to support the institution,” reads the petition launched by art critic Tyler Green. “We urge the Met’s officers to oppose any attempt to sell the art that the Met holds in public trust.”

Some museum directors fear that donors are less likely to contribute art if they fear it will be sold, or that formerly generous trustees who see the money from art sales may be less likely to donate.

“A donor needs to carefully consider whether it is in their best interests for a work to go to a museum rather than sell it themselves or put it in a private museum,” said Max Anderson, director of New York museums. Indianapolis and Dallas. “To say we have billions of dollars in art and yet you hold out your tin cup to the community and say, ‘Please support our museum and by the way, we can now sell art to pay our bills,’ the community will say: ‘Why are you coming to me?’ ”

Michael Govan, director of the Los Angeles County Museum of Art, said valuing art as art – for its educational value – “was one of the pillars of the industry.

“Collections are not accounted for because they are not valued as assets,” he said, “not being sold as assets.”

In fact, most museum collections are so full of donated works that have been tax deducted that it is fair to say that some of them were taken over by the American taxpayer. Will the routine resale of such gifts call into question the favorable tax treatment of museums as nonprofits?

“What if a museum leaves a charitable purpose and becomes more of a commercial entity?” said Anderson. “It opens up a whole world of violations around the model that has governed nonprofits for over a century.”