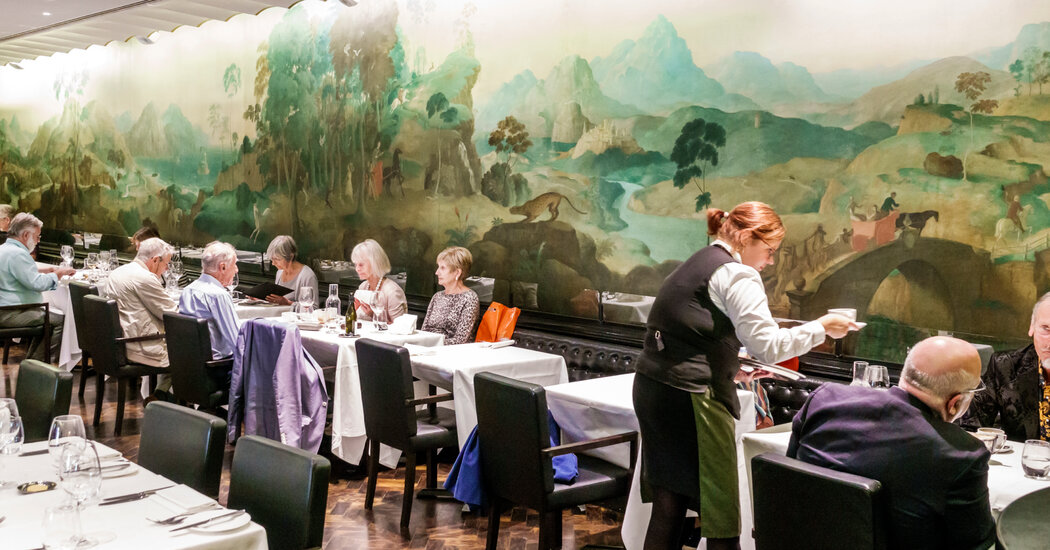 LONDON – The museum has been busy since Tate Britain reopened last month after a five-month pandemic shutdown. Masked visitors have once again roamed the galleries, halls and atrium, enjoying the vast collection of British art, from portraits from the 16th century to contemporary installations.

One room remains out of bounds, however, and not because of the coronavirus restrictions. The doors to the museum’s basement restaurant are closed, and a sign outside says it will “remain closed until further notice”.

The restaurant’s walls are adorned with a 55-foot-long mural entitled “The Expedition in Pursuit of Rare Meats,” painted by British artist Rex Whistler. The epic work, commissioned in the 1920s to attract guests, depicts a hunting party riding through a landscape of tall mountains, ornamental gardens, castles, and Chinese pagodas in search of unicorns, leopards, and other exotic prey. “Mr. Whistler’s fun fresco will make the Tate Gallery’s flatbreads and London buns even more assimilable,” said Lord D’Abernon, chairman of the Tate’s trustee, in a speech at the mural’s unveiling in 1927.

Two small sections of the work, each a few inches wide, were not mentioned by D’Abernon at the time, but they now weigh heavily on Tate’s trustees. One shows a smartly dressed white woman pulling a struggling black boy by a rope; in another the boy is running to keep up behind a horse-drawn cart that he has tied around his neck with a collar.

This mural was the backdrop for the upscale restaurant for nearly 100 years – one of several restaurants in the museum that grossed around $ 900,000 in total in the year before the pandemic – but few diners seemed to notice the boy’s plight.

That changed last summer when photos surfaced on social media and activists called for pictures of the boy to be removed from the walls and the restaurant to be closed.

Tate – the group that runs Tate Britain and its sister museums, including Tate Modern – says they cannot change the mural, which is a work of art in their care and part of a building that is protected under UK heritage law. It has promised a formal look back at the future of the work that is slated to begin this summer and be completed by the end of the year.

However, whatever the review concludes, someone will be disappointed. The mural has placed Tate in a dilemma at a moment when tensions are high over how to deal with Britain’s legacy of racism and colonialism. The museum is caught between activists who want the artwork removed – and whose racial justice concerns are shared by many artists and Tate staff – and the UK government, which funds the museum and prefers a less interventionist approach.

Last year, UK Culture Secretary Oliver Dowden outlined a “keep-and-explain” policy on controversial monuments after activists toppled a 17th-century statue of slave trader Edward Colston in Bristol, England. Museums should display controversial objects, he said. “As a publicly funded entity, you should not take action motivated by activism or politics,” Dowden wrote in a letter outlining policy to the leaders of Britain’s major museums.

The Tate’s trustees will also be cautious as the government’s desire to contain the Crusades appears to be affecting the composition of the museum’s boards. Officials must approve appointments to the governing bodies of major institutions, including Tate. In January the Department decided not to appoint Aminul Hoque, an academic who has called for the “decolonization” of the UK curriculum, to serve on the board of the Royal Museum Greenwich for a second term. The organization’s chairman resigned in protest. In March, a science museum trustee Sarah Dry withdrew an application for reappointment after feeling pressured to support the “keep and explain” policy, she said in a letter to the museum’s board of directors.

In a statement sent by email, a spokesman for the Ministry of Culture said, “We are committed to ensuring that our publicly funded entities reflect the full diversity of taxpayers they serve,” adding, “There is no automatic presumption of reappointment.” “

The Department declined to comment on the Whistler mural.

The director of another major London museum, who spoke on condition of anonymity for not wanting to publicly criticize the government, said Tate was facing a difficult decision. “But it’s just hard because the government makes it hard,” added the museum director. One option could be to put a false wall around the plant to allow the restaurant to reopen while a long-term solution is discussed, the director said, but that would be against the “keep and explain” policy.

And activists want more than temporary solutions. The social media turmoil began last July when The White Pube – the name used by a duo of art critics, Zarina Muhammad and Gabrielle de la Puente – posted photos of its offensive sections on Instagram. “How does this restaurant still exist?” You wrote in the caption. “Which interior is THAT?”

“How do these rich whites still choose to go there to drink from the ‘best wine cellars in the capital’ with an exquisite slavery in the background?” added the post. An online petition asked Tate to remove the mural from the wall or remove the restaurant from the room.

Overnight, Tate changed its website to remove a reference to the restaurant as “Europe’s most fun room,” and a few months later, Tate’s trustees discussed the mural. According to the minutes of the meeting, the museum’s ethics committee was “clear” that the work was offensive.

In December, Tate promised to review the future of the mural. “We don’t want to anticipate any further speculation in this process,” said a Tate spokesman. Tate declined multiple interview requests for this article.

The White Pube said in an email that it was bizarre that it was taking Tate so long to come up with a solution. “We think Tate’s inability and unwillingness to actually do anything about the mural beyond vaguely abstract thinking is a sad, sad indictment,” they said.

But the problematic images were discussed in the museum long before The White Pube made them known to the public. Penelope Curtis, director of Tate Britain from 2010 to 2015, said in a telephone interview that in 2013, when Whistler’s mural was restored as part of a $ 63 million remodel of the museum, some staff raised concerns. Officials wrote a flyer for guests who asked about the mural, she said.

“There has been discussion about putting a screen over it,” Curtis said of the section showing the enslaved black boy, “but that would only have drawn attention to it.”

In 2019, a sign was placed on the door of the restaurant, similar to the explanatory texts in the museum galleries. Four paragraphs in the text, the text recognizes that “Whistler depicts the enslavement of a black child and the plight of his mother with highly stereotypical figures that were common at the time.”

Some employees said the sign didn’t go far enough. “The statement did not address racism or the trauma these images cause,” Maria Kubler, a former volunteer manager at Tate, said in an email. Kubler left the organization in January 2020 because it felt “a lack of support in my efforts to fight racism,” she added.

Rudi Minto de Wijs, a former co-chair of Tate’s People of Color network, said members of the group were “disgusted by the mural” and raised the issue repeatedly in meetings. Last summer, after the social media storm, he met online with Maria Balshaw, the director of Tate, and made a proposal from the network to turn the restaurant into an educational space, he said.

Balshaw said the idea was being considered, “but nothing happened,” said de Wijs. “Nothing never happens,” he added. He bought the museum in April after feeling like a “troublemaker,” he said.

The frustrations of Tate staff clash with the public program of the museum group, which recently advocated the work of black artists. Last year, Tate Modern held a major retrospective for filmmaker Steve McQueen and recently presented a cross-career show by photographer Zanele Muholi. Tate Britain is about to open an exhibition on Britain’s relationship with the Caribbean and another by Lubaina Himid, the British artist who won the 2017 Turner Prize.

Activists expected the Tate to change faster than it could, said Himid, who is also a member of Tate Britain’s advisory board. “Nothing in the Tate is fast,” she said in a telephone interview, “but compared to museums in France and Spain or Italy, it moves at an absolute pace.”

The restaurant should be turned over to artists to respond to Whistler’s murals, Himid said: Plexiglass could be installed in front of the work and artists could draw over it, or bands could provide musical answers.

Removing or hiding the mural would lose the chance of provoking a conversation about how Tate might change, Himid said. “I assume other artists have different views,” she added.

It was unclear whether this was the case, however: a dozen great black British artists – including McQueen, Yinka Shonibare, and Lynette Yiadom-Boakye – declined interview requests for this article.

A major retrospective of Yiadom-Boakye’s work ended at Tate Britain last month, and one recent afternoon black visitors to the exhibition voiced a range of views on what should happen to the Whistler mural.

Kevin Charles, a 52-year-old attorney, said the restaurant should be open. “We are mature enough to see things in context,” he said. Three interviewees said they liked Himid’s suggestion of leaving the space to color artists. But the most haunted views came from those who believed there was only one choice, and that Tate should have made it long ago.

“Cover it up,” said Ione Brown, a fitness instructor. “Why do we need to be reminded of this past?” She added. “Put one of these down there instead,” she said, waving at Yiadom-Boakyes’ enigmatic portraits of black people. “They are beautiful. This is a festival. “