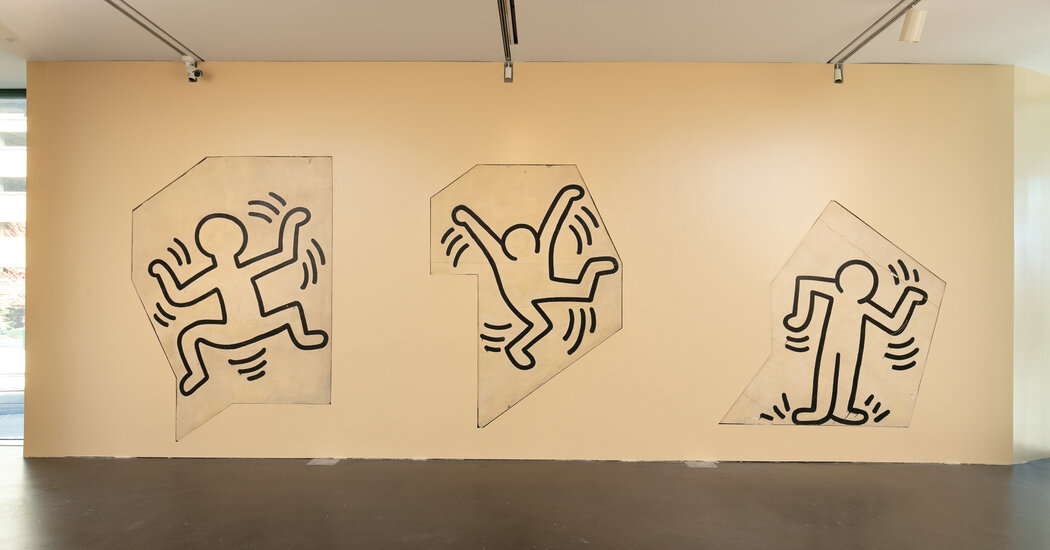 DENVER – The exhibition “Keith Haring: Grace House Mural” cannot lead to the happy ending that the Keith Haring Foundation envisioned for the sprawling 25-meter masterpiece that the artist painted in a youth center in Manhattan almost four decades ago.

Although, at least in the short term, it might be lucky enough.

After all, the show is returning to the public, the action-packed work of art that Haring installed on the three-story stairwell of Grace House one evening, a gift for the teenagers visiting the Catholic-run nonprofit on the Upper West Side.

In just two hours, the artist left several of his characteristic movements. Radiant baby, barking dog, dancing man – they were all part of this happy parade of faceless figures climbing the steps. The future of the mural was in doubt when the shelter closed in 2016 and its operator, the Church of the Assumption, sold the building and declined the foundation’s requests to find a buyer to keep the work on.

Instead, it paid an excavation company $ 900,000 to extract it in sections and sent it up for auction at Bonhams in 2019. The work grossed $ 3.86 million, a record for a Haring mural. Since the buyer wanted to remain anonymous, concerns arose that an object intended to strengthen the youthful spirits would end up invisible to everyone else in the home of a wealthy collector.

But here it is at the Museum of Contemporary Art Denver, sliced ​​and diced and a little worn, but still with prime examples of the work of a great painter. Nora Burnett Abrams, director of the museum and curator of the exhibition, has a personal connection with the buyer, whose name she does not reveal. The owner offered to loan the work to the museum, and Abrams agreed. Original works by the artist, who died of AIDS in 1990 at the age of 31, are rare in Denver.

However, this summer visitors will find it hard to forget that the mural was broken into 13 pieces, disrupting the flow that was so important to its placement. Haring painted it – in 1983 or 1984, neither Abrams nor the foundation are entirely sure – as a continuous piece that snaked around doors, corners and pipes.

The oddly shaped sections of the wall reflect their original location; some have angled tops or bottoms that mirror the ceilings or floors of the sloping stairwell; one still has a built-in light switch; another has a “fire extinguisher” sign attached.

EverGreene Architectural Arts, the company that excavated the pieces, did so with care, rescuing just inches of the wall’s concrete block wall and reinforcing it with metal frames along the back. The painted surface was untouched and the original signs of wear, scratches and cracks have been preserved.

Haring’s mesmerizing brushstrokes in black house paint are just the same. His figures, reproduced as simple line drawings, still have a flowing painterly quality. Haring worked quickly and without sketching or underpinning, guiding his brush with precision, turning sharp corners around his elbows and ankles without soiling the depth of his surfaces – he kept raising and lowering his brush to create those motion-implicating strokes, and just left a few casual drip marks behind.

The Denver Museum has worked carefully to make the mural look comfortable in its new setting. Each section is awkward to depict, weighs hundreds of pounds, and extends up to 9 feet in height and width. Some have six sides. The museum has built its own walls around them so that they appear embedded in the building. Original doors, mailboxes, and a Grace House building badge are included in the arrangement for context.

Nevertheless, the display has its limits. Even with the add-ons, the viewer strolling through the four rooms of the exhibition cannot help but have the feeling that they are not seeing the original Grace House mural, but a chop shop version of it. Removing this work from a stairwell obscures its narrative of climbing stairs in a fatal way. History is lost.

Gil Vazquez, acting director of the Keith Haring Foundation, calls the end result “bittersweet”. He knows it could have been worse; The mural could have been destroyed in the multi-million dollar real estate shuffle in Manhattan. As the museum notes, Haring created 45 murals during his lifetime, less than half of which are still extant.

But, said Vazquez, the Grace House mural could have been saved in its original form. The foundation worked to sponsor a sale of the building between the church and the Ali Forney Center, an organization that cares for homeless LGBTQ youth, despite a failed deal.

“At least the thing exists so that it can be studied,” said Vazquez. For now, a lot of young people have a chance to see it. The Museum of Contemporary Art Denver welcomes children and is free for anyone under the age of 18. The mural will be on view there until August 22nd and has been booked for another public viewing: a stop at the Schunck Museum in Heerlen, Netherlands, in March. In addition, Abrams said she was unaware of the owner’s plans. Lucky enough will have to do for now.