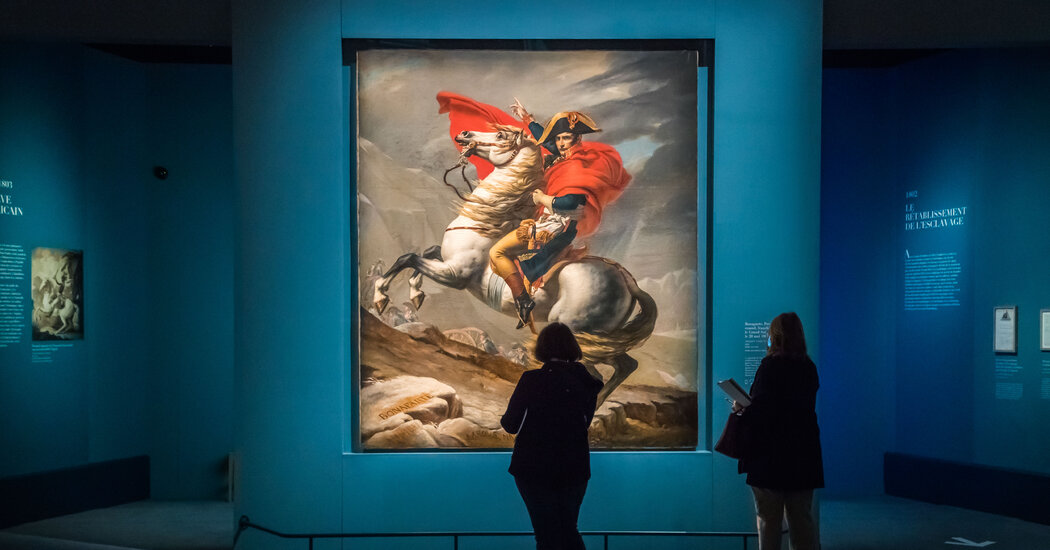 PARIS – The spoils of war are really spectacular.

When Napoleon Bonaparte crossed the Alps at the head of his army, he asked the Italian states he had conquered to give him works of art that were the pride of the peninsula. The Vatican is deprived of “Laocoon”, a masterpiece of ancient Greek sculpture, and Venice of Veronese’s painting “The Wedding at Cana” (1563).

The goal is to “bring together the greatest masterpieces of art in Paris” and “bring together all the products of human genius in a nation freed from despotism”, according to a video that explains the expropriations within the huge new “Napoleon” exhibition. presented in the Grande Halle de la Villette until September 19th.

Bonaparte brings enough of his conquests to fill the soon-to-be Louvre Museum. And the looting with which he was insatiable and methodical – a cultural legacy presented today to commemorate the 200th anniversary of his death – foreshadow the French conquests in sub-Saharan Africa a century later. However, many of these works were repatriated after Napoleon’s defeat, setting a precedent that continues to fuel debates about restitution to this day.

“Napoleon understood that the kings of France used art and architecture to glorify themselves and shape the image of political power, and he did exactly the same,” explains Cynthia Saltzman, author of Plunder, a story by Theft of Italian works of art by Napoleon, in an interview.

In Italy alone, he confiscated almost 600 paintings and sculptures, she said. He wants to be “associated with these ingenious works” and justify their plunder by invoking “the mission of the Enlightenment”.

After his defeat at Waterloo in 1815, Napoleon’s opponents rushed to return the treasures collected in the Louvre. British miniature painter Andrew Robertson observes that the museum “is now really gloomy to look at”: “Penetrated by dust, ropes, triangles and pulleys”.

According to Mrs. Saltzman, almost half of the Italian paintings that Napoleon captured were returned after his fall; the other half remains in France, starting with “Les Noces de Cana”.

Why are the other tables not being returned? Many of them are scattered around other museums in France and the authorities have been reluctant to return them. In addition, every Italian state freed from French occupation has to submit its own application for restitution, which makes the process difficult, explains Ms. Saltzman.

To this day, France preserves important works, including an important painting by Cimabue, panels from an altarpiece by Mantegna, a canvas by Titian and another by Veronese, she explains.

Still, the post-Napoleonic dismantling of the Louvre at a time when France is looking to return its stolen treasures to its former colonies in sub-Saharan Africa is an example of this, says Bénédicte Savoy, French historian and co-author of a 2018 report on extraditions to Africa on behalf of President Emmanuel Macron.

“This is the first major rendering of the modern era,” says Savoy of the cultural returns of 1815. The negotiations are hotly debated in the newspapers and among intellectuals such as Goethe and Stendhal. The “dismantling” of the Louvre is “the model of the following cultural restitutions,” she adds.

When large numbers of works are reproduced, the Napoleonic pillage leaves a bitter aftertaste that continues to this day. The Italians still condemn “i furti napoleonici”, the Napoleonic looting. In 2016 and 2017, the masterpieces stolen by Bonaparte were the subject of a special exhibition in Rome at the Scuderie del Quirinale.

Egypt regularly calls for the return of the Rosetta Stone, which was discovered during excavations during the occupation of Egypt by Napoleon (1798-1801), confiscated by the British during his defeat and is currently in the British Museum. The Paris exhibition presents a plaster copy.

Through the exhibition – a dizzying array of objects including his monogrammed throne, jeweled sword, and the fragile hearse that carried him to his grave – Napoleon appears as a complex figure whose political and cultural strategies were shaped by the French Revolution.

Ruth Scurr, Senior Lecturer at Cambridge University and author of the new biography “Napoleon: A Life in Gardens and Shadows”, describes him as a conqueror. “He sees himself as a stabilizer for France by putting France’s interests first and bringing the country out of a time of absolute chaos and revolutionary disruption,” she said. He is also engaged in “a revolutionary search for knowledge” and is planning a universal museum in Paris. He sees himself as a “collector and discoverer” not only of works of art, but also of plants and animals, she says.

Ruth Scurr’s book vividly illustrates how art serves politics. It is a July 1798 parade in which the booty that has just arrived from Italy is exhibited in the streets of Paris. The main attraction are the four gilded bronze horses that were torn from above the main entrance of St. Mark’s Basilica. (This bronze quadriga was stolen by the Venetians in Constantinople during the Fourth Crusade, some six centuries earlier).

The parade also includes ancient marble statues, carts of live animals (camels, ostriches, lions, and gazelles), rare books and manuscripts, and paintings – though the crowd can’t see these masterpieces. “Rome is no longer in Rome. Everything is in Paris, ”the crowd chants happily, says Ruth Scurr.

Napoleon had a great desire to bring the treasures of the world to Paris and especially to the Louvre, says Vivien Richard, who heads the Louvre’s history service at the museum.

“Napoleon really founded the Louvre as we understand it today through the wealth and diversity of the collections on display,” he explains. During the Napoleonic era “it was a process of enriching the collections and becoming an encyclopedia that continued”.

For Ms. Savoy, Napoleon’s compilation of the first Louvre collections and their subsequent restitution resulted in the opening of many other public museums in Europe, including the new departments of the Vatican Museums in Rome and the Prado Museum in Madrid.

Why then is Napoleon not condemned as strongly for his cultural plunder as the French colonial powers for their plunder of Africa?

“There’s a big difference, it’s the length,” she said. “This episode of the occupation of Europe only lasts a decade, not decades or even a century.” In addition, she believes, “the colonizers of Africa brought forth all the wealth of the country and the culture of these countries while at the same time humiliating their people.”

“Under Napoleon,” she concludes, “it’s not that extreme.”

A Wedding ceremony or an Artwork Set up? A Little of Each.