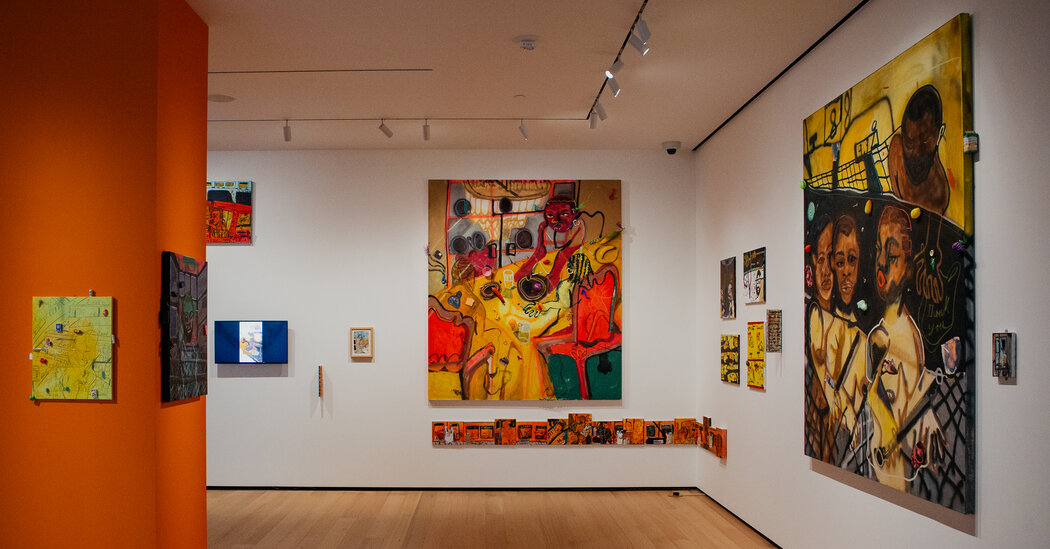 The artist Jesse Krimes had a unique type of adaptation during his nearly year-long stay in solitary confinement.

“I didn’t have access to any materials, so I used my local newspaper, bars of jail soap and playing cards that were sold at the superintendent,” he recalled.

He cut out mug shots and photos of known people from the paper and transferred them to the damp surface of soap chips with the help of wet toilet paper. Then he cut out the faces of the kings, queens, and jacks from decks of cards, replaced them with the soap portraits, and sent them undetected to a friend outside the prison.

The aim of the collection, entitled “Purgatory”, was “to question the availability of imprisoned people, to make their and my entire humanity visible to the public,” said Mr Krimes, who was on probation for young people from the age of 13 was charged with marijuana use, underage drinking, and a variety of other crimes, and was in and out of prison on drug charges with cocaine between the ages of 18 and 31.

Born and raised in rural Lancaster, Pennsylvania, he is now 38 years old and lives in Philadelphia, where he focuses his arts practice on mass imprisonment and criminal justice reform.

Mr. Krimes is one of 25 contemporary artists with strong Philadelphia connections whose work will be on view in New Grit: Art & Philly Now at the Philadelphia Museum of Art through August 22nd.

“New Grit” marks an important moment in the more than 100 years since the groundbreaking for the majestic building on Fairmont, a hill overlooking the city’s Benjamin Franklin Parkway.

The museum underwent an interior remodel worth $ 233 million under the direction of renowned architect Frank Gehry. Earlier this month, the final phase of the current project was unveiled with great success.

Construction, which began four years ago, comprised most of the 90,000-square-foot redesign, including two new 10,000-foot wings, each with eight generously proportioned galleries. “New Grit” is located in the contemporary and modern art wing, while the second wing displays American art from 1650 to 1850 in and around Philadelphia from the museum’s permanent collection.

The city “played such a central role in the development of American art in the 18th and 19th centuries and is still a vibrant place for artists to this day,” said Timothy Rub, director and general manager of the museum. “The two shows complement each other. They celebrate Philadelphia then and Philadelphia today. “

Commenting on the overall expansion, Mr. Rub said: “It is the first new room that we have added since the building opened in 1928. We have converted the former space behind the house into public space and galleries. “

The two-story room in the Williams Forum connects the new wings and has a massive wall installation called “Fire (United States of America)” by Teresita Fernández, a first-generation American who was born to Cuban immigrants and whose work is physically and thematically united . the “New Grit” and American art exhibitions. More than 80 pieces of coal with shadowy stripes form a map of the United States and its territories to explore the concept of the place and ask questions about identity and Americanity.

Reclaimed areas, also designated to improve blood circulation, include a 640-foot arched walkway that runs the length of the building. Rows of windows next to the new galleries have been unlocked so visitors can see the city beyond.

“The artists here pick up on some of the most pressing ideas in the contemporary art world, topics that speak for being and belonging in the 21st century,” said Erica F. Battle, assistant curator of contemporary art and senior curator of the Philadelphia Museum of Art for ” New Grit “. “The exhibition is a refreshing look at what it means to be a Philadelphia artist,” she said. It’s about how we connect with the place and with each other. ”

Compared to the past, according to Ms. Battle, the city’s art scene has become more lively, which can be attributed to excellent art schools, relatively affordable studio space and a large number of rooms and art organizations run by artists.

“These vignettes are supposed to evoke the absence of homes and other spaces where incarcerated people were once part of the community,” but have disappeared in prisons, said Mr Krimes, who works with formerly incarcerated artists through Right of Return USA, a fellowship co-founder and regularly works on projects with people in prison, Some of them are serving life sentences.

“The numbers are a reminder that something is popping up over them all the time,” he said. “We need to think about how we can use restorative justice instead of punishment when people have the opportunity to improve themselves.”

For example, the diagonal design pattern of “Walls of Change,” a large-format, bold and colorful abstract mural by Odili Donald Odita, a Nigerian-born American artist and Philadelphia resident, reflects the mass of moving bodies of the black Lives Matter protests last summer around the museum, ”said Ms. Battle.

Mr. Odita, whose work is distinguished by his deliberate use of color, also used chalk tones from street drawings by racial justice demonstrators, as well as the rose and yellow tones of Kasota Stone, a distinctive type of limestone used in the walls and museum floors.

The mural is one of five orders for the exhibition.

The Memory & Belonging rubric examines acceptance and connection in Arrival and Belonging, a commission from Michelle Angela Ortiz, known for her large-scale public works of art that focus on community engagement and social issues.

The installation combines several light boxes made of etched and hand-painted photographs with animation on video screens. It is based on first person accounts to tell the stories of four people who moved to Philadelphia and the challenges they faced in making it their home.

“This work connects larger audiences with the community members who are part of our city,” said Ms. Ortiz, who was born and raised in Philadelphia and has been an artist there for 20 years. “It brings the streets of Philadelphia back to the museum. It’s about seeing their beauty and resilience, as well as their power and strength. “

The different stories – a Liberian refugee who fled a civil war; a Puerto Rican man displaced by a natural disaster; a formerly homeless, non-binary person from the American South; and the artist’s mother, who immigrated from Colombia – are you changing our perception of who a Philadelphian is, Ms. Ortiz said, raising questions about who belongs here and when a place becomes home?

“It’s a way of remembering who we are, where we are from, but it’s also a way of building a sense of community and connectedness,” said Ms. Ortiz. “All of these stories are really part of a larger network. There is living and breathing history in our churches. “