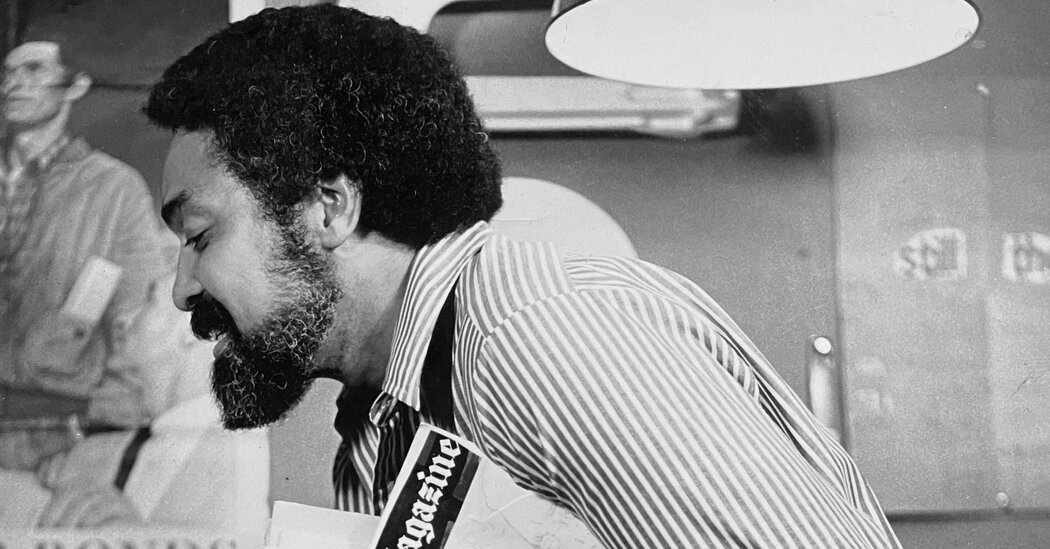 Reynold Ruffins, an illustrator, graphic designer, and artist who was an early member of Push Pin Studios, the mischievous and bustling design firm founded by his Cooper Union classmates Milton Glaser, Ed Sorel, and Seymour Chwast, died on July 11th in his home in Sag Harbor, NY He was 90.

The cause was a cardiac arrest, said his son Seth.

Print advertising in the early 1950s was a formal, rather boring affair. Products were mostly offered with traditional fonts paired with romantic or idealized photographs and illustrations on the one hand or a cool, rational European modernism – elegant photographs and sans serif fonts – on the other.

In funny, faux-nostalgic drawings and lettering, the illustrators Mr. Glaser, Mr. Chwast, Mr. Sorel and Mr. Ruffins turned the field upside down and thus largely created the post-modern discipline of graphic design, by the previously different roles – illustration and font design – taken and have put them together.

“They turned design into entertainment,” says Steven Heller, former art director at The New York Times Book Review and editor of The Push Pin Graphic: A Quarter Century of Innovative Design and Illustration, a 2004 visual story of the work of the studio. “They did it using folk shapes like cartoons and styles like Art Nouveau and Art Deco coming back and reinterpreting them. They brought Passé back. They brought pastiche into the design vocabulary and made it cool. “

In his own work, Mr. Ruffins has dismantled European images of the late 19th and early 20th centuries such as the posters and illustrations by Emil Pretorius or Heinrich Christian Wilhelm Busch, a German caricaturist and illustrator. The kinetic madness of the German cartoons and the undulating forms of Art Nouveau, which were picked up by Mr. Ruffins and the other Push Pin artists, anticipated the trippy, psychedelic imagery that would become the characteristic look of the late 1960s.

“Reynold played with the shapes,” said Mr. Heller. “While they fit into the 20th century continuum, they are definitely his own.”

As Mr. Ruffins later recalled, being black made him a rarity in advertising – an industry that before the civil rights era was an all-white Mad Men world. Since his work was his calling card, customers often did not know his breed.

“After I quit a job, I met an art director and there were a few surprises,” Ruffins told Sag Harbor Express in 2013. “One time, I did a big job – both physically and financially – and had my portfolio under the arm. I felt so good The receptionist looked up and said, ‘There’s the post office.’ The assumption was that if you were black you would deliver something. “

Reynold Dash Ruffins was born in Queens on August 5, 1930. His father, John Ruffins, was an equipment salesman for Consolidated Edison, also known as Con Ed, the energy company; his mother, Juanita (Dash) Ruffins, was a housewife.

Like a high school buddy Mr. Glaser, he attended High School of Music & Art and then Cooper Union, the very selective and at the time free art college in downtown Manhattan. Mr. Ruffins graduated in 1951.

One summer, he and his classmates there, Mr. Glaser and Mr. Chwast, started a graphics company called Design Plus. You had two customers, Mr. Chwast recalled. One wanted to make a lot of cork place mats (Mr. Ruffins designed the tropical scene they screen printed on them) and the other was a monologue that needed a flyer. “Then our vacation was over and we went back to school,” said Chwast.

Next, Mr. Chwast, Mr. Sorel, and Mr. Ruffins came up with the idea of ​​selling themselves with a Digest of Type and Illustration, a four-page booklet designed as a parody of the Farmer’s Almanac. They called it the Push-Pin Almanack and sent it to the art directors to get the work done. (Herr Glaser had driven to Europe in a Fulbright.) It was filled with ephemera – factoids and poems and ancient remedies for toothache, for example – in a neo-nostalgic style all of its own. Mr. Ruffins designed the push pin logo. Copies of the almanac and its successor, the Push Pin Monthly Graphic, are now collectibles for design lovers.

In 1954, Mr. Chwast, Mr. Glaser, and Mr. Sorel started a proper design company and called it Push Pin Studios, although they had few clients, and invited Mr. Ruffins to join.

But Mr. Ruffins had married Joan Young, a Cooper Union classmate, and they had a baby, so he took a job with a more established company. As a sign of the times, Joan was asked to leave Cooper Union when she was pregnant. The dean told her she was wasting a place that could be given to a man. Decades later, the school awarded her a certificate of completion.

When Push Pin Studios established itself, Mr Ruffins returned and stayed for about five years, Chwast said, before setting off on his own in 1960 as well. Of course, Mr. Glaser later co-founded New York Magazine, designed the “I ♥ NY” logo and other iconic designs.

Mr. Ruffins contributed designs for The Urbanite, a short-lived culture magazine for “The New Negro,” released in 1961 and curated by Byron Lewis, an advertising director and others. James Baldwin, Lorraine Hansberry, Langston Hughes and LeRoi Jones also contributed.

“We couldn’t win paid advertising,” said Lewis, who later started his own advertising agency Uniworld to focus on the black market. “No mainstream advertiser wanted to advertise in a Negro publication. That was our name back then. We were a start-up trying to be different from Ebony and Jet, which focused on black celebrities. Reynold was a pioneer because he worked in the mainstream white advertising world. That was unheard of for a black at the time. He was a role model. “

He worked with Jane Sarnoff, a writer, on 14 children’s books, which were quirky and comedic exhibits on any subject that interested them in a given year, from superstition to chess to puzzles.

His illustrations for “Running the Road to ABC” by Denize Lauture, a Haitian poet, earned Mr. Ruffins the 1997 Coretta Scott King Book Awards illustration for illustration. “Illustrator Reynold Ruffins’ beautiful single- and double-sided gouache pictures capture the rhythm of Lauture’s rhythmic text and the bright colors of the children’s world,” wrote the Los Angeles Times in 1996.

Mr. Ruffins received illustration awards at the Coretta Scott King Book Awards in 1997 for his work on “Running the Road to ABC”.

Joan Ruffins, a painter, died in 2013. In addition to his son Seth, Mr. Ruffins has two other sons, Todd and Ben; a daughter, Lynn Cave, and six grandchildren.

Mr. Ruffins, who taught in the Queens College Art Department for a little over a decade, began painting full time, cheerful, jazzy, and often abstract works in the early 2000s, which he exhibited in Sag Harbor and elsewhere.

“I’ve been fortunate enough to enjoy my work almost always, some less naturally than others,” he told The Sag Harbor Express. “I probably work harder painting with easels than I do as an illustrator because I had the limitations and need to please the client when knowing what you can’t do can be helpful.”