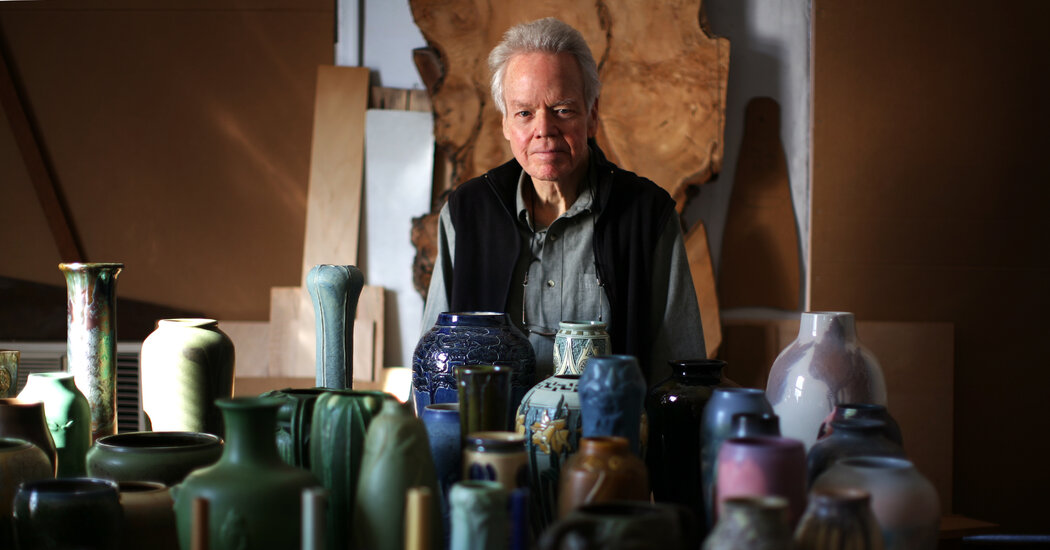 It started, said Robert A. Ellison Jr., with a white ceramic plate with a rim of blue rabbits. He saw it about 60 years ago in a shop in Greenwich Village on one of his walking tours of Manhattan, where he was trying to establish himself as an abstract painter.

“My hand just seemed to be reaching for it – it wasn’t a conscious process,” he recalled decades later. “So I thought, maybe I’ll become a Dedham collector – it said that on the bottom of the plate – even though I didn’t know anything about Dedham.”

He actually became a collector of Dedham tableware, as well as countless other ceramics, and continued studying until he became an authority on the art of ceramics. Mr. Ellison amassed an enviable collection and in 2009 he promised the Metropolitan Museum of Art a gift of more than 300 American ceramic works.

The museum said it donated more than 600 works in total, gestures that made the Met’s modest ceramic collection an impressive one.

“It’s a transformative gift – that’s the only word for it,” said Alice Cooney Frelinghuysen, the curator of American decorative arts for Anthony W. and Lulu C. Wang at the museum in a telephone interview. “This is a really enduring and important legacy that he has achieved.”

Mr. Ellison died in Manhattan on July 9th. He was 89 years old. His wife, artist Rosaire Appel, said the cause was a hemorrhage in the brain.

In February, the Met opened Shapes From Out of Nowhere: Ceramics From the Robert A. Ellison Jr. Collection, an exhibition of more than 75 works from his latest offering.

“The exhibition expands the art-historical narrative while also representing a person’s passionate vision,” wrote Roberta Smith in a review in the New York Times.

With the donation’s focus on modern and contemporary works, she added: “This latest act of generosity leads the museum into the living future.”

Robert Anderson Ellison Jr. was born in Dallas on May 14, 1932, and grew up in Fort Worth, Texas. His parents, Robert and Margaret (McCracken) Ellison, owned the Ellison Furniture and Carpet Co., founded in 1888 by his grandfather.

Mr. Ellison’s father died before he was 2 years old.

“Mother decided to continue the business with salaried managers and wait until I grow up so I can continue my father’s mission,” he said in an interview for American Art Pottery, a book by Ms. Frelinghuysen, Martin Eidelberg and Adrienne Spinozzi released from the Met in 2018 when Mr. Ellison’s promised 2009 gift was officially delivered to the museum.

He had also married Nancy Harrell in 1957, and after graduation they spent a year in New York studying art. He credited her for introducing him to the art world and encouraging him to try painting. They returned to Fort Worth and Mr. Ellison actually ran the family furniture business for a number of years and also opened a gallery. But in 1962 the family sold the business and Mr. Ellison and his wife returned to New York and moved into a loft on the Lower East Side.

He pursued painting, fascinated by abstraction and also developed photographic skills. But pottery collecting soon attracted a lot of attention. He compared finding items in shops and flea markets to activities from his Texas upbringing.

“I learned how to hunt and fish from various family members at an early age,” he said in an interview in 2018. “I liked the anticipation and surprise that were part of these activities, which I think could be an element of my collecting urge.”

The pieces began to pile up and Mr. Ellison relied on his taste and learned the medium in the process. A 1972 book “The Arts and Crafts Movement in America: 1876-1916” by Robert Judson Clark and Paul Evans’ “Art Pottery of the United States” two years later gave him a context for his hobby.

“The cat was out of the bag: I had collected something called ‘art ceramics’,” he wrote in an essay in “Shapes from Nowhere”, the catalog for the current exhibition. “I went on, now knowing that I was one of the first collectors to rediscover this pottery from my grandmother’s time.”

His collection grew much more adventurous than that original Dedham record and included objects of all kinds, from the conventional to the abstract. He was particularly impressed by the work of George Ohr, who made eccentric vessels in the late 19th and early 20th centuries that are reminiscent of works by artists such as Picasso. In 2006, Mr. Ellison published a monograph on him, “George Ohr, Art Potter: The Apostle of Individuality,” illustrated with his own photographs.

His first marriage ended in divorce. He moved to Greenwich Village in 1990 and he and Mrs. Appel married in 1994. In addition to his wife, he has a daughter from his first marriage, Hillary Ellison, and two grandchildren.

Max Hollein, French director of Marina Kellen’s Met, said Mr Ellison’s donations would enable the museum to “properly celebrate many of the great artists who work in this medium”.

“Bob Ellison was a visionary collector and a unique advocate for the art of ceramics,” he said via email. “He was a real pioneer for this medium.”