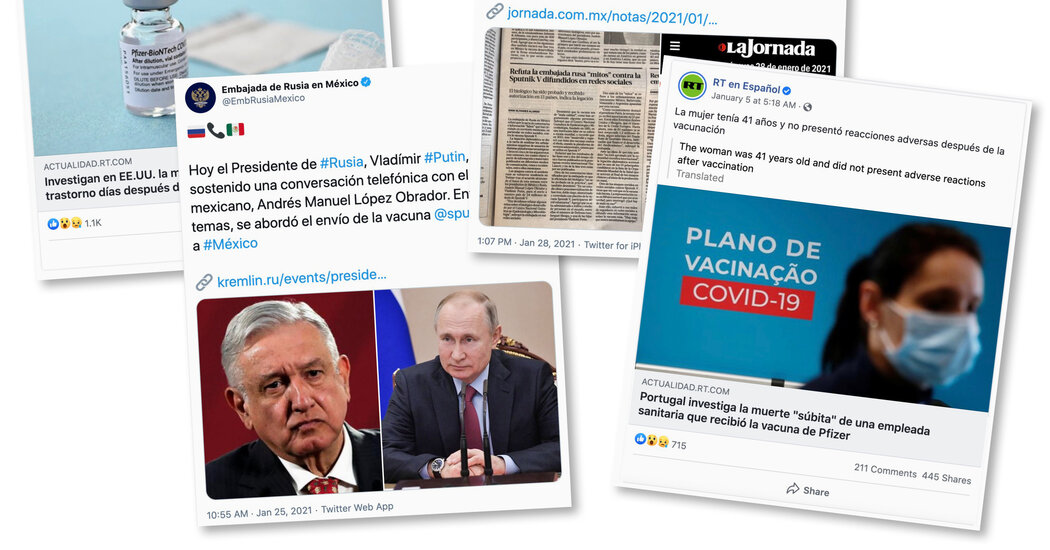 Russian news outlets linked to disinformation campaigns in the US have a new goal in their sights: to convince Spanish-speaking countries that the Russian coronavirus vaccine works better than its American competitors, according to researchers and State Department officials.

The Russian campaign focused on Latin American nations, including Mexico, which this week signed a contract to purchase millions of doses of the Russian vaccine, and Argentina, which began vaccinating its citizens last month.

The campaign was carried out on Spanish-language social media and reinforced through the official Twitter account of the Russian Embassy in Mexico City. It signaled a new wrinkle in operations with Russian influence and promoted Russian industry and the scientific seal of approval over their competitors as governments around the world battle over their populations.

The Russian vaccine Sputnik V was named after the first satellite to orbit the earth, launched by the Soviet Union in 1957. Sputnik V is considered cheaper and easier to transport than vaccines from the American companies Pfizer and Moderna. However, some researchers say the criticism of the Western vaccines in Russian outlets has been misleading.

“Almost everything they advertise for the vaccine is manipulated and published without context,” said Bret Schafer, a member of the Alliance for Securing Democracy, an advocacy group that pursues Russia’s disinformation. “Any negative story or problem that has come up about a US-made vaccine will be compounded as the zone is flooded with positive reports about the Russian vaccine.”

Media backed by the Russian government posted hundreds of links on Facebook and Twitter to messages reporting potential connections suggesting American vaccines may have played a role in deaths, the researchers said. The reports omitted follow-up reports, which stated that the vaccines most likely played no role in the deaths.

“This was a coordinated effort that was part public relations and part disinformation. It’s one of the biggest operations we’ve seen promoting a vaccine narrative in Latin America, and it seems to have had an impact, ”said Jaime Longoria, disinformation researcher at First Draft, a nonprofit that supports journalists and independents Researcher. “Russia has steadily created a narrative that has grown and to some extent has been accepted.”

Researchers have followed up similar Russian efforts in Eastern European countries that are still negotiating with Russia to purchase the vaccine. Disinformation researchers have also watched Russia spread similar narratives in half a dozen languages ​​and target countries in central and west Africa.

According to disinformation researchers, China has also joined the fight and obtained a similar anti-American vaccine tone for a domestic audience. While Russia and China don’t seem to be working together, their common interests have resulted in a common narrative. Last month, a Twitter account for Sputnik V contained a Chinese report falsely claiming that the US media had remained silent about deaths related to Pfizer’s vaccine.

Intelligence officials in the United States noticed the first surge in Russia against Spanish-speaking communities in August when President Vladimir V. Putin announced that he had given Sputnik V approval. Since then, Russia’s campaign has intensified, said two intelligence officials, who spoke to the New York Times on condition of anonymity because they were not authorized to speak to reporters.

State Department officials described Russia’s campaign of influence as a combination of state-sponsored media in Russia, highlighting reports warning of the dangers of US vaccines and promoting reports enthusiastic about the Russian-made vaccine.

A report was distributed at the Foreign Ministry last month detailing Russia’s efforts, officials said. A department spokeswoman said Russia was trying to promote its own vaccine while trying to “sow suspicion of Western vaccines” in the US. The Foreign Ministry’s Global Engagement Center analyzed over 1,000 Russian-facing Twitter accounts and found that Spanish-language accounts showed the greatest engagement. Russia’s campaign, the spokeswoman said, “undermines collective global efforts to end the global pandemic.”

The campaign of influence in Mexico best understands the efforts of the branches with ties to the Kremlin. It was different from previous Russian disinformation campaigns that put false and misleading information online. As social media companies have become more aggressive to root out disinformation, Russian operations have focused on promoting selective news that bypasses the truth, rather than rejecting it.

“They have cultivated a large audience and are consistently in the top 10 most shared stories or links,” Longoria said.

This week, Hugo López-Gatell, Mexico’s deputy health minister, said his government had signed a contract for the Russian vaccine that will provide 24 million doses for 12 million people. The vaccine will be delivered in several stages by May.

On Tuesday, the medical journal The Lancet published the results of an independent review of Sputnik V, which found it was 91.6 percent effective and had no serious side effects. The news was a boost to the Mexican government’s procurement efforts.

In December, Facebook announced it had removed a Russian disinformation campaign that published information in French, English, Portuguese and Arabic on a range of topics, including support for the Russian vaccine.

“We know that influence operations take several forms, including overt messages distributed through state-controlled media,” said Liz Bourgeois, a Facebook spokeswoman. “We put clear labels on these publishers so people know who the information is from.”

Twitter declined to comment on Russian operations targeting Spanish-speaking audiences, but said it is still under investigation.

The Russian campaign relied on messages picked from cherries, researchers said. On Jan. 17, Russia Today tweeted Espanol that Norway wanted to investigate why 23 elderly people had died after receiving the Pfizer vaccine. Three weeks earlier, the same report tweeted multiple reports of six people who died during Pfizer’s vaccination attempt. The reports did not include context from medical experts who said the deaths were most likely unrelated to the vaccine.

The reports shared similar narratives on Facebook. On January 5, Russia Today’s Spanish-language Facebook page, which had 17 million followers, shared a story claiming a Portuguese nurse died two days after receiving the Pfizer vaccine. The story implied that the vaccine was responsible, although doctors and an autopsy concluded that the vaccine probably didn’t play a role in her death.

Russia’s diplomatic corps also used their social media accounts to promote the image that the Russian vaccine had been subjected to unfair scrutiny.

The volume of jobs is remarkable, said Mr. Longoria and others involved in operations with Russian influence. On CrowdTangle, Facebook’s own tool for analyzing interactions on the website, they found that Russia Today and Sputnik’s pages, which are aimed at Spanish-speaking audiences, had posted more than 1,000 posts with over six million interactions with the Word “vacuna” (Spanish) generated for vaccine.

Researchers said Russia’s previous efforts were focused on other targets, like the Oxford-AstraZeneca vaccine. Russia’s efforts to undermine trust in this vaccine – including memes and posts on Facebook, Twitter and elsewhere portraying it as dangerous – peaked in the summer and early fall, according to researchers.

The campaign included suggestions that the vaccine would turn people into monkeys because it was developed using a chimpanzee virus. According to a previous report in The Times of London, it was mainly directed against countries debating whether to buy British or Russian vaccines.

That campaign ended abruptly in mid-December after drug makers announced that Russian vaccine Sputnik V and Oxford-AstraZeneca vaccine had reached an agreement to jointly test a combination of their vaccines.

“You can see a clear turning point where the stories about AstraZeneca suddenly go from all negative to all positive,” Longoria said. “It’s very stark and very clear that as business interests change, so too have the goals of their influence.”

Oscar Lopez contributed to the coverage.