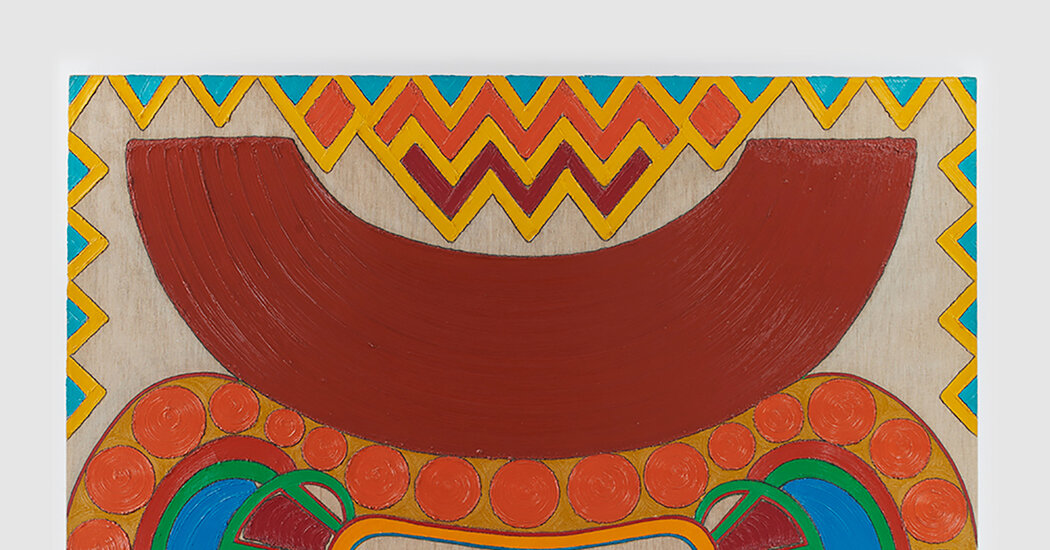 ANNANDALE-ON-HUDSON, NY – What is art history made of? Everything that happened in a specific time period, place or style? Or is it just the best of what happened? These questions form an eternal contrast between inclusivity and quality. They appear in “With Pleasure: Pattern and Decoration in American Art, 1972-85,” a rich, if inadequate, survey in the Hessel Museum of Art at Bard College – and sometimes openly collide with one another.

In the mid-1970s, the disrespectful upstart movement Pattern and Decoration, or P&D, was one of the first cracks in the hegemony of minimalism-conceptualism. The other was “New Image Painting”, an abstract figuration named after its 1978 exhibition at Whitney. But New Image has never really been consistent. In contrast, P&D was a rush, at least at times. It prefers patterns that have been appropriated from a global palette of textiles, ceramics and architecture, but also from previously neglected Americana such as quilting, embroidery and cake decorations. As a self-identified group, it was consciously formed and named by a core of sympathetic artists who soon expanded to include numerous like-minded sensibilities.

It offered gorgeous alternatives to mainstream art in both New York and Los Angeles (it was bicoastal) and the general masculinity of modernism. She despised the division between Western and non-Western art; high and low and arts and crafts. It highlighted the work of women and included many women artists. It was casual and unpretentious, maybe too simple to like, but also proof that there was art according to the object-oriented stance of conceptualism.

For a while, P&D also had its own pioneer, art historian Amy Goldin (1926-1978), who advocated Islamic art as a source for contemporary artists. During his time at the University of California at San Diego, Goldin taught two of the movement’s most prominent artists. One was Robert Kushner, who started out as a performance artist in New York, staging fashion shows for friends who wore elaborate patchwork capes (and not much else) which he then hung on the wall; the exhibition summarizes his progress in three works. Kim MacConnel meanwhile dyed sheets with exuberant patterns and thus achieved a very unpainting fleetingness. Based on Matisse and Hawaiian shirts, MacConnel’s motifs also adorned sofas, side tables and lamps, as his surroundings here like to testify. Another avid proponent of the style was John Perreault (1937-2015), a critic of the Village Voice and then SoHo Weekly News, who organized Pattern Painting in 1977, the first major review of P&D at the PS 1 Contemporary Art Center.

The movement also had its own dealer in Holly Solomon, who opened her commercial gallery on West Broadway in 1975 and exhibited many of her artists.

What does P&D look like 40 years later? Less interesting for itself than for the permission it granted subsequent generations of artists who safely weave, quilt, sew and make pottery. Just as the critic Robert Hughes once cruelly described color field painting as “giant watercolors”, too much P&D could be called “giant wrapping paper”, patterns for the sake of patterns and without scale and punch.

The exhibition was curated by Anna Katz in collaboration with Rebecca Lowery, Deputy Curator of the Museum of Contemporary Art in Los Angeles, where it made its debut in 2019. You have opted for inclusivity over selectivity and have left no stone unturned. It is just a slight exaggeration to say that the exhibition represents almost every artist who has been on a P&D show anywhere. And there were many, according to the list in the show’s catalog. When you read it, you can hear small museums all over the country breathe a sigh of relief: Here something was accessible, visually appealing and easy to transport, after all the minimalist austerity, emptiness and heaviness.

Early enthusiastic essays by Goldin and Perrault are included in the show’s lovely catalog, a true P&D manual with a lovely cover taken from Jane Kaufman’s Embroidered, Beaded Crazy Quilt (1983-85), one of the few masterpieces here the movement comes across. Katz approaches her subject from all angles, its relationship to feminism, multiculturalism and counterculture as well as its (now questionable) cultural appropriation and even its underlying indebtedness to minimalism (the use of repetition and grids).

The six other essays include one by Lowery, who focuses on a little-known site of the P&D process in Boulder, Colorado that has particularly nurtured ceramic artist Betty Woodman, one of the mainstays of the movement. Her glazed deconstructions of vase and sconce combinations here, like MacConnel’s efforts, have an impeccable sense of color and scale.

Other highlights in the Hessel include homages to wallpapers by Cynthia Carlson and Robert Zakanitch. Carlson re-created her installation “Tough Shift for MIT” from 1981 by again picking up a dough tube in order to press unusually tactile small flowers over the walls of a gallery at regular intervals. Using a large, loaded brush, Zakanitch created opulent enlargements of the more subdued wallpaper he remembered from his grandparents’ house. Kozloff’s ambitious riffs on Islamic silk and canvas art stay too close to their sources; these patterns were enhanced by mosaic in her public works of the late 1970s and 1980s; her current P&D pics next door may be her best.

Miriam Schapiro, who like Kozloff helped formulate some of the basic principles of P&D, looks good in the catalog, but is represented by “Heartland”, a terrible painting from 1985. Up detail of “Heartland” makes a fabulous flyleaf in the catalog. Better works include a quilt-like painting with stamped motifs by Susan Michod; “Primavera” by Merion Estes, a fountain made of pink brushstrokes; and the lavish paintings by Mary Grigoriadis with vast and archaic architectural details. The Doric capital of “Rain Dance” reminds us that Greek temples were brightly painted when they were first made.

Relevant works by closely coordinated art stars of the 60s provide momentum: Lucas Samaras, Frank Stella, Billy Al Bengston, Alan Shields and Lynda Benglis, who are quoted with the words “I was never really part of their gang”.

The show is the least predictable and more rewarding as it ventures into the distance for artists whose endeavors were linked to the gang but usually weren’t part of the gang because, for one thing, they weren’t white. While Howardsa Pindell’s work was featured on P&D shows almost from the start, other relatively new additions are the efforts of Al Loving, Sam Gilliam, William T. Williams, Emma Amos, and most importantly, Faith Ringgold. In 1974 Ringgold painted luminous geometries, inspired by African Cuba scarves, on narrow canvases and then expanded them with a view of Tibetan thangka above and below with – apparently – pieces of spare tourist blankets that were sewn and applied by her mother. It has to be the most confident scroll paintings you will ever see.

With configurations like this one creates a leaner, less diluted “With Pleasure”. Our time is a time of vital rediscovery by artists from the recent and distant past, but not all deserve to be rescued from the trash can of history.

Patterns and decoration were supplanted by the onslaught of neo-expressionism and visual art in the 1980s. But the model it sets is more alive than ever, especially since so many non-Western artists fall back on their own craft traditions. An overview of the reverberations of P&D is now too large to be summarized in a single exhibition.

With pleasure: Patterns and Decoration in American Art 1972-1985

Until November 28th at the Hessel Museum of Art at the Center for Curatorial Studies, Bard College, Annandale-on-Hudson, NY (845) 758-7598, ccs.bard.edu.