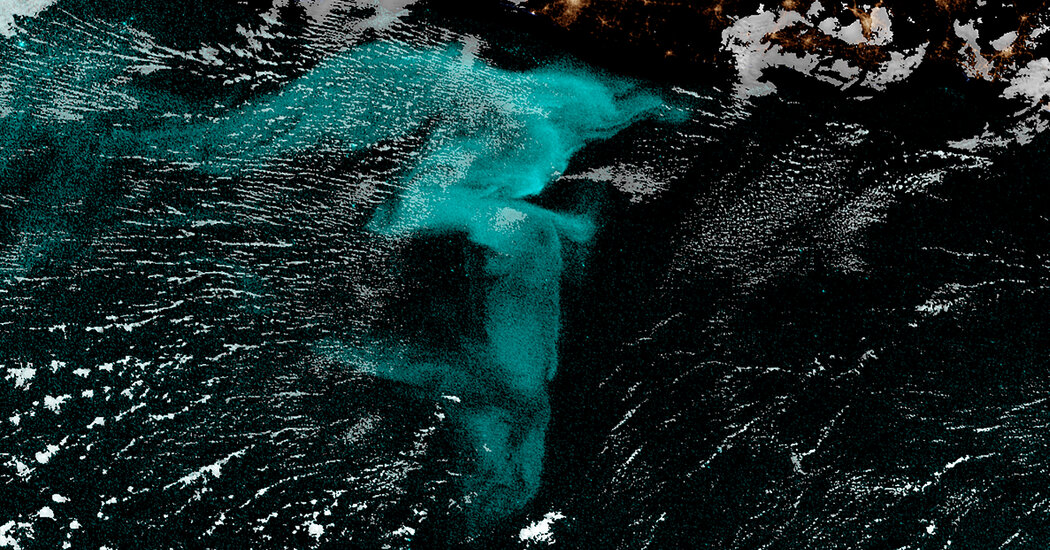 The sea has always glowed.

The Greeks and Romans were familiar with glowing sea creatures, as well as the more general phenomenon of sea water, which can glow in bluish-green colors.

Charles Darwin encountered glowing waves while sailing aboard HMS Beagle near South America on a dark night. He called it “a wonderful and beautiful spectacle”. As far as the eye could see, he added, “the crest of each wave was bright” – so much so that the “livid flames” lit the sky.

Scientists are now reporting that ocean bioluminescence can be so intense and massive that satellites orbiting 800 kilometers in altitude can see glowing mats of microorganisms as they materialize in the oceans. Last month, eight researchers reported in Scientific Reports that in 2019 they found a glowing patch south of Java that grew larger than the combined areas of Vermont, New Hampshire, Massachusetts, Rhode Island, and Connecticut.

“It was a revelation,” said Steven D. Miller, lead author of the bioluminescence study and satellite observation specialist at Colorado State University. When a hidden natural wonder comes to light, he adds, “It stimulates your imagination.”

The scientists said scrutinizing images captured by a pair of satellites between December 2012 and March 2021 enabled them to identify a dozen extremely large events – one every eight months or so. Even the smallest was a hundred times bigger than Manhattan.

The images open a new window to the world’s oceans, scientists say, and promise to aid in tracking and studying the glowing seas, the origins of which are little known.

Kenneth H. Nealson, a pioneer in bioluminescence research at the University of Southern California, called the discovery “a big step in understanding” how an enduring mystery of the ocean “actually comes about.”

The new paper found that the large concentrations of living lights have long “evaded rigorous scientific investigation and therefore little is known about their composition, their formation mechanism and their role in the marine ecosystem”.

Marine bioluminescence is often associated with cruel creatures from deep below. An iconic illuminator is the monkfish, dangling bright baits in front of needle-like teeth. In contrast, the shining seas appear to be formed when many trillions of tiny bacteria light up at the same time.

Dr. Nealson, who was not involved in satellite research, and colleagues reported in 1970 that dilute suspensions of a certain type of bacteria do not give off a gloss. However, if one is allowed to reproduce, the microbes can suddenly light up, as if a switch were thrown. Scientists now suspect that the glittering masses of bacteria attract fish whose intestines provide nourishing habitats.

Dr. Miller’s journey of discovery began almost two decades ago when a midday conversation raised the question of whether the bioluminescence of the ocean could be visible from space. While working at the US Naval Research Laboratory in Monterey, California, he began studying images from a weather satellite in 2004. Soon he discovered a glowing spot in the northwestern Indian Ocean that was almost the size of Connecticut.

The blurry area was barely visible, but Dr. Miller and his colleagues were quite excited because they knew that a new generation of satellite sensors would soon offer a lot more sensitivity and sharpness. The upgraded sensors debuted in 2011 and 2017 on two satellites launched by the National Oceanic and Atmospheric Administration.

The sensitive detectors proved – at least on dark nights – to be adept at capturing the shimmering light from the seas and provided the images for the current report.

A surprise, said Dr. Miller, said that the events drag on for a long time. For example, the major pre-Java patch in 2019 lasted at least 45 nights. This raises the possibility that a rapid response team of oceanographers will have enough time to reach the spots and collect samples for detailed study.

To this day, said Dr. Miller, no team was successful. He added that television networks making nature documentaries have shown an interest in using the satellite detections to track down and film the sparkling sea.

Peter Herring, a British marine biologist known for his work on deep bioluminescence, said the satellite work was important because, after a long period of uncertainty, the prospect of finally finding concrete evidence of what was driving the glowing eddies emerged.

The discovery, he added, “is causing quite a stir and is set to have significant ripples.”