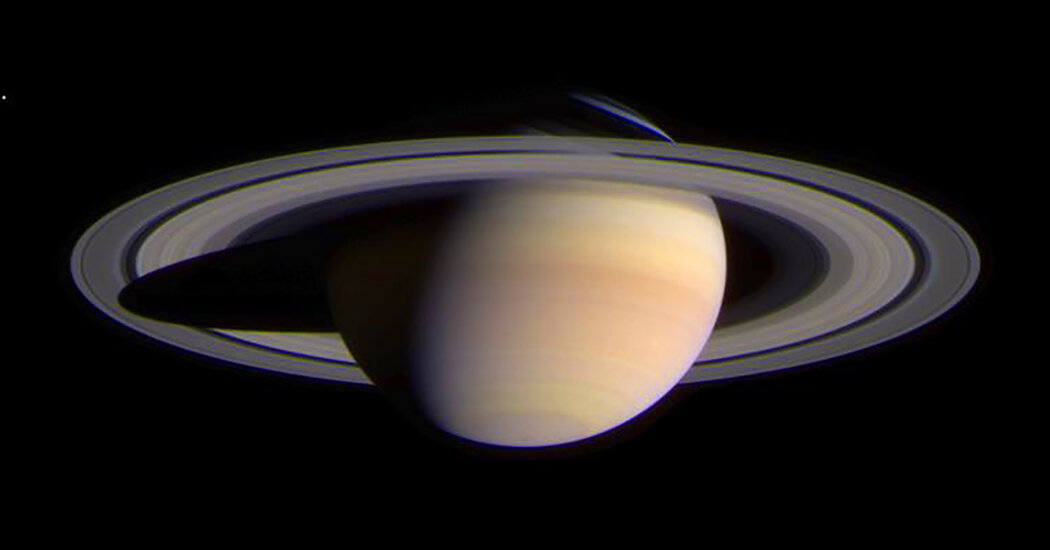 The icy rings of Saturn are not only aesthetically wondrous marvels. One of them also records a beautiful planetary soundtrack.

The interior of the planet, which is hidden under a shell of mostly hydrogen gas, is shaking. This causes shifts in the local gravitational field, which attracts particles in the extensive C-ring of Saturn and makes them dance. These idiosyncratic dances can take the form of spiral waves, and different groups of waves reveal the characteristics of certain features of the interior of Saturn.

In other words: Saturn is an orchestra. Various notes appear on the C-ring, just like on sheet music. Scientists can read these notes, hear the music and identify the individual instruments and musicians – all without seeing the orchestra itself.

Using data from the Cassini mission, which ended in 2017, scientists have listened to and deconstructed a multitude of symphonies in the C-ring of Saturn over the years. Now, two California Institute of Technology researchers – Christopher Mankovich, a planetary scientist and Jim Fuller, a theoretical astrophysicist – have deciphered enough of this music to hear the sounds of one of Saturn’s most enigmatic features: its core.

According to her paper, published Monday in the journal Nature Astronomy, the core is colossal: it makes up 60 percent of the planet’s radius and has 55 times the mass of Earth. And in contrast to the ordered solid clumps of metallic, rocky, or icy matter found in other worlds, the core of Saturn is a pandemic amalgam made up of various rocks and ice that mixes with a liquid metallic form of hydrogen. The results will bring researchers closer to understanding how Saturn – and other gaseous giants like this one, including Jupiter – were born.

“It’s a very beautiful story,” said Linda Spilker, the project scientist for the Cassini mission at NASA’s Jet Propulsion Laboratory, who was not involved in the work.

The geological bowels of the Earth, the Moon, and (most recently) Mars have been mapped with seismometers, instruments that record the journeys of seismic waves that move through the planet and behave differently as they traverse mechanically different layers. Saturn, without a solid surface, makes this kind of detective work impossible.

Orbiting space probes can roughly map the inner layer cake structure of a gas-laden planet by detecting subtle changes in gravity. But the core of Saturn has such a weak influence on the planet’s gravitational field that this trick cannot be used to accurately visualize it.

Fortunately, the flutter of Saturn’s C-ring has revealed what traditional techniques cannot. For the past three decades, scientists have been observing the ring’s strange spiral waves through images from the Voyager missions and Cassini. And finally, they argued that these spirals are caused by gigantic vibrations in Saturn.

“These are just constant tremors that are all over the planet,” said Dr. Mankovich.

It is a technique known as “Kronoseismology”: “Kronos” is the Greek word for Saturn and “Seismo” refers to Shakes. In 2019 another riddle was solved: How long is a day on Saturn? (About 10 ½ earth hours.)

Now the core of Saturn is enlightened. Older models depicted the planet as if it were a clearly layered cosmic candy. Kronoseismology has revealed the dirty truth. The core consists not only of rock and ice, but also of liquid metallic hydrogen, which was previously assumed to be a separate layer. There is more rock and ice in its center and more liquid metallic hydrogen on its outer edges – but consistently everything is mixed in a chaotic cocktail. Together with the transition from liquid to gaseous hydrogen above, this paper paints Saturn as a large, fuzzy ball.

Despite the ongoing success of the technique, scientists still don’t know what causes the core to vibrate and create these spiral waves in the C-ring. The earth vibrates like a bell when it is shaken by powerful tectonic tremors. “But Saturn is liquid, so where are the quakes?” Asked Mark Marley, a planetary scientist at the University of Arizona and an early pioneer in kronoseismology who was not involved in the work.

The orchestra’s musicians may finally be known, but the hunt for its elusive conductor continues.