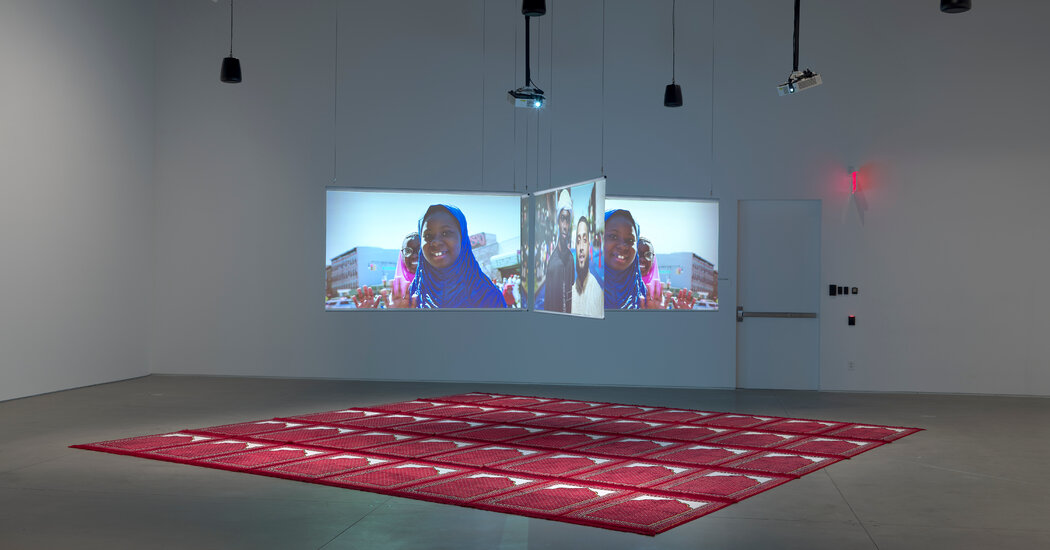 For about 40 years, the Masjid At-Taqwa, a mosque on Fulton Street, has served as a refuge for the Muslim community in Bedford-Stuyvesant, Brooklyn. The mosque was auctioned off by an enterprising group of supporters in the early 1980s and has been the focus of property developers in recent years looking to transform the aging building, with its distinctive polychrome marble facade, into luxury retail and residential projects.

Impressed by the mosque’s impressive size and community, Aisha Amin, a Muslim American documentary filmmaker, began to familiarize herself with the people who populated the mosque for the weekly Friday prayers and eventually gained enough confidence to make a short documentary entitled, Friday. ”

Amin’s project – presented as an immersive installation – was one of 27 proposals selected for The Shed’s second annual series of exhibitions and performances, “Open Call”, currently on view at the Hudson Yards center. The candidates, who all live in the city, were selected from around 1,500 applications. Of the 27 selected proposals, 11 visual artists offer paintings, videos and installations on the second floor of the shed.

Amin’s installation “The Earth Has Been Made a Place of Prayer” consists of four canvases that play their documentary in a loop and are hung in neat rows over a row of prayer rugs. “The work is at the same time a love letter to the people who have taken it in their lap, a testimony to the resilience of communities against gentrification and a functional place for Muslims to offer prayers.

It is one of several that reflect the local ethos of the Open Call program, which offers up to $ 15,000 on new commissions from the selected artists, the overwhelming majority of whom are not represented by galleries, and their work for the first time in a museum presents. Time.

Anne Wu hired a manufacturer from Flushing to create a playful sculpture – a kind of massive climbing garden made of stainless steel fences and PVC and Tyvek building materials – with the distinctive chrome-like surface and filigree designs that are instantly recognizable in Asian-American residential areas in Queens. The peculiarity of this aesthetic for the Pan-Asian immigrant community and Wu’s skillful ability to present this aesthetic so succinctly and without irony in “A Patterned Universe” suggest that the generous, commission-based approach of the Shed, judged by dozen of the arts , interdisciplinary experts on generative results

Indeed, in its generosity – in terms of time, floor space, and funding – it is the shed’s success. The works on display are usually large-format, and the focus is clearly on video and new media installations, as evidenced by the smooth production quality of the video installations by Simon Liu, Le’Andra LeSeur and Kenneth Tam, each standing on its own among their own kind . In his 16-millimeter multi-channel film “Devil’s Peak”, Liu envelops the viewer in the images and sounds of the civil protests against the Hong Kong government’s planned extradition law in 2019 and 2020. Liu’s camera pans over the city and its many places of violence to create connections between people and the power they can wield when collectively organized in mass riots.

Caroline Garcia’s installation is less successful, with its different video, augmented reality and ceramics, which are combined in a too confused assemblage to honor its alleged theme of mourning. However, this theme is poignantly evoked in two paintings by Esteban Jefferson depicting the memorials to his friend, artist Devra Freelander, who was killed by a concrete truck while cycling in 2019 at the age of 28 on the corner where Freelander died, Jefferson reminds us that the city is and was full of talented talent, some of whom left too soon.