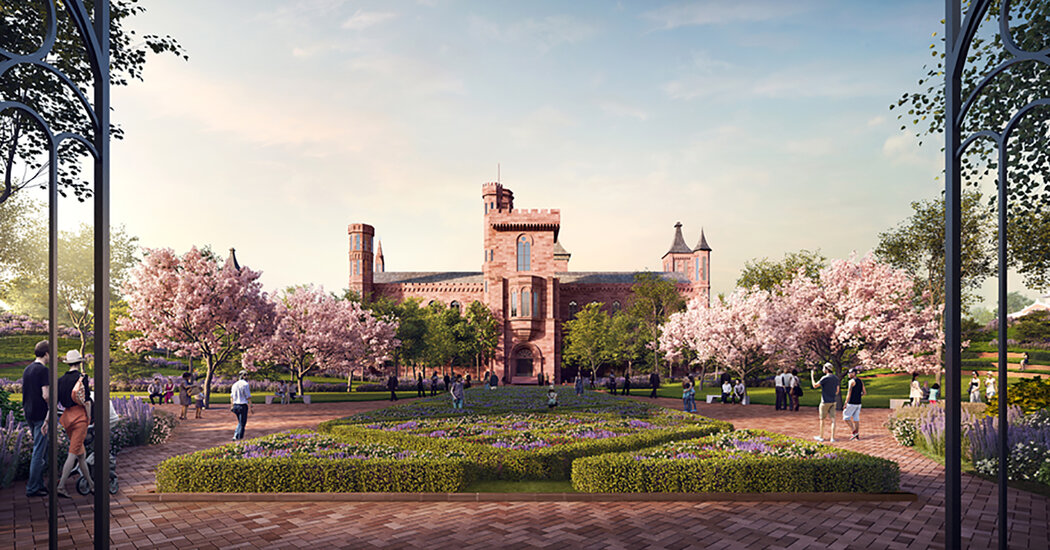 Smithsonian’s staggering $ 2 billion expansion plan should propel the institution into the 21st century.

Complete with an ambitious 19th century extension to the red administration building that would have added the castle that would have added restaurants, retail stores and restrooms, as well as new entrances to the National Mall, the National Museum of African Art and Arthur M. Sackler Gallery. The designs for the south campus were made Unveiled with great enthusiasm in 2014. The first phase, which included repairs to the outside of the Hirshhorn Museum, was already under way.

However, on Wednesday the organization announced that its master plan would no longer contain any of these elements. Instead, it has been redesigned to focus on restoring the interior and exterior of the palace, as well as interior and subsurface improvements to the Arts and Industries Building and has been largely closed since 2004 for renovation work.

Ann Trowbridge, Smithsonian’s assistant director of planning, said preserving the buildings had been the focus of the redesign from the start. “The most important aspects of the master plan in relation to the castle, AIB and Hirshhorn have always focused on restoring and renovating their historical structure,” she said. “And that is still the priority.”

The design by the Danish architect Bjarke Ingels would have dramatically transformed the 17 hectares that surround the castle into a visitor gate over the next 20 to 30 years. Construction is scheduled to start this year. It would have relocated the loading dock to expand the garden behind the castle and placed a shock-absorbing shell under the building to protect against earthquakes. (Carly Bond, a historic preservation specialist at the Smithsonian, said a proposed seismic-based isolation system would continue to provide earthquake protection.)

The pared-down plan, which was first publicly unveiled to a virtual audience of community leaders on Wednesday afternoon, focuses on the renovation and restoration of two national historic landmarks: the castle, designed by James Renwick Jr. and completed in 1855, and the Arts and Industries Building designed by Adolf Cluss and Paul Schulze and built in 1881. Also included is a new central underground utility that will serve several buildings, including the Castle and the Arts and Industries Building.

Lonnie G. Bunch III, who became the Smithsonian Institution’s first African-American secretary when he was acquired in 2019, told the Washington Post on Monday that the changes to the master plan were “simply the evolutionary process” that resulted from his “arrival” and ask specific questions. “He said he delegated the implementation to Kevin Gover, the deputy secretary for museums and culture.

The Smithsonian spent $ 5.5 million on architecture and research fees for the 2014 master plan. In response to this proposal, some people lamented the loss of the peaceful Enid A. Haupt Garden, although the Smithsonian later announced it would be retained, while others worried that the earthquake protection measures and underground expansion of the castle would put the building at risk represent.

Linda St. Thomas, the Smithsonian’s main spokeswoman, said in an interview Tuesday that the master plan, approved by the National Capital Planning Commission in 2018, was merely a vision for the next few decades of the campus. “We know there will be changes to the projects when they come up for approval and individual public review,” she said.

But the Smithsonian’s finances took a hit during the pandemic. The institute lost $ 49 million to coronavirus-related closures between March and September and abandoned plans to open its first overseas exhibition space in London in September, in partnership with the Victoria and Albert Museum. Since the revised plan for the castle and art and industry building focuses on major improvements such as electrical and plumbing systems, as well as a new roof and new windows, it will be largely funded by Congress, the Post reported for the first time. The updated cost was not disclosed.

The Smithsonian is currently completing the first project under the master plan, a renovation of the exterior of the Hirshhorn Museum and soon the sculpture garden. Construction of the castle and the art and industrial building is slated to begin in 2023, St. Thomas said, and is expected to take at least five years. (The last major renovation of the castle was completed in 1968.) The third project, the removal and subsequent restoration of the Enid A. Haupt garden to replace the roof of the building below, is not expected to begin until 2029.