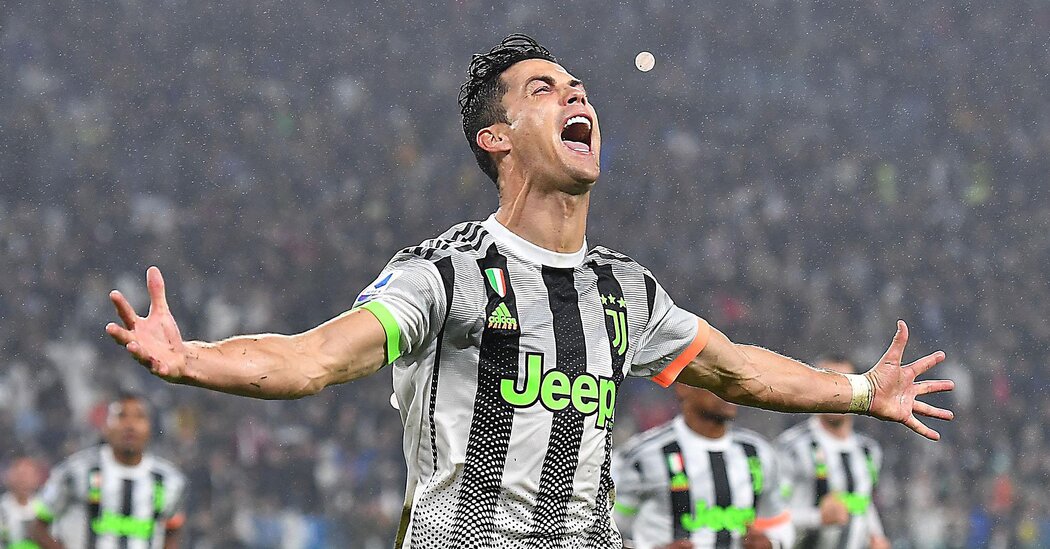 The lights in the Allianz Stadium went out and the music swelled up. In the darkness, a small spot seemed to glow in the middle of the field. The center circle began to pulsate and pucker. And then the grass itself seemed to be pulled away as if it were nothing more than a tablecloth. Three words ran around the electronic billboards: “History. Passion. Lols. “

The extravagant structure did not seem to suit the occasion. Juventus was at home in Genoa that evening, an ordinary Serie A game. It was late October 2019, far too early in the season to determine the title or win a trophy. What mattered, however, wasn’t what Juventus played for, but what the team played.

That night, Cristiano Ronaldo and his teammates unveiled a special edition jersey designed in collaboration with his clothing partner Adidas and Palace, the British underdog skate and streetwear brand.

The design played on the history and passion of Juventus and included the team’s traditional Bianconero stripes and the annoying touches that made Palace a streetwear phenomenon. The team’s logos and player numbers were displayed in an acid green. The stripes began to pixelate towards the bottom.

The shirt was hailed as a masterpiece, but Juventus would never wear it again. When Ronaldo and his teammates took to the field against Turin a few days later, they were back in their regular uniforms. It didn’t matter. Later that week, the Palace kit went online – or, as the streetwear world put it, dropped.

A few years earlier, Juventus had held a lavish reception at the Museum of Science and Technology in Milan. The guest list included players from the past and present, but also pop culture fixtures like Giorgio Moroder, the pioneering music producer, and model and actress Emily Ratajkowski.

The party was organized to mark the beginning of a new era for the club. The team found itself in the midst of an unmatched period of success on the field, establishing a dominance in Serie A. However, there was a risk of being left behind by its continental rivals. To stay competitive, the revenue gap at clubs like Barcelona, ​​Real Madrid and Manchester United had to be closed, said chairman Andrea Agnelli. He was convinced that Juventus had to become “more pop” for this.

He’s not the only manager in European football who has this thought. In 2018, fans lined up around the block in front of Parc des Princes to get their hands on the first drop of a collaboration between Paris St.-Germain and Jordan Brand, a subsidiary of their main apparel partner, Nike. Earlier this year, Arsenal announced a collaboration with 424, a streetwear brand based in Los Angeles.

As with the audience for Juventus’ collection with Palace, the club’s fans are not the core market for this collaboration. They’re not even necessarily fans of the sport. The collections may not be worn as football products or as a declaration of loyalty for a team. The ties are not, as is often shown, attempts by the insatiable European superclubs to sell more tickets or gain more fans.

“A lot of people who buy these PSG Jordan kits won’t care about the team’s position in the league,” said Jordan Wise, founder of Gaffer magazine and creative agency False 9. “Many of them may not even like football . ” That is precisely their value for the clubs: a completely untapped market that is not subject to the vicissitudes and tribalism that affect football fans.

“Working with streetwear brands gives clubs access to a completely different space,” said Wise. “But to do this they have to think and look different: less like clubs, but more like sportswear brands.”

No team has embraced this change as well as Juventus. At the instigation of Agnelli, the club decided in 2016 to carry out a comprehensive rebranding. Every aspect of the team’s identity would be at play including, most controversially, its iconic crest, a symbol whose roots go back more than a century.

“It was more than just a badge change,” said Giorgio Ricci, Juventus’ CFO. “It was a new visual identity that would allow us to be seen as innovative and to be one step ahead.”

The club passed the rebranding idea on to a number of marketing agencies and eventually chose a pitch from Interbrand, a long-term partner. The approach had been risky: after consulting the company’s global creative network, Lidi Grimaldi, the manager of Interbrand’s Milan office, decided against offering the club a range of options and spread her bets in the hopes of sparking the imagination .

Instead, she said, Interbrand chose a design. Although the company had previously helped tweak the Juventus crest, make it a little less ornate, and tweak the color scheme a bit, this time around Interbrand suggested something more revolutionary. “Something really bold,” she said.

You didn’t have much time. With Juventus and Adidas to start work on the club’s kits for the next season, Interbrand had less than a month to bring their ideas together. Instead of looking like a football crest, it designed a logo that “has more in common with Google, Apple or Nike,” said Grimaldi.

There would be no depiction of a charging bull as has been on every version of the coat of arms for more than a century. There wouldn’t even be a crest as such: just a sleek and stylized J, a design that would be the centerpiece and inspiration for an updated visual identity. It wasn’t a coincidence. “The whole strategy was to expand the range of activities without giving up the core of the club, football,” she said.

To introduce the idea to the Juventus board, Interbrand made a short film that offered a glimpse into the future of this bold new future: the stylized J that is emblazoned in cafes and hotels and adorns events used in collaboration with cutting edge fashion brands. Juventus executives, including Agnelli, were delighted, Grimaldi said. This was exactly the kind of change they were looking for. The main answer, she said, was, “Wow.”

The club knew, of course, that such a drastic change would not be universally welcomed. When the new logo was unveiled, fan reaction was mixed at best. Juventus felt they had no choice but to beat the storm.

Perhaps the best measure of his success was Tuesday. After a similarly intense design phase, Inter Milan – Juventus’ fierce domestic rival – unveiled their own new crest, a simplified version of the badge that has graced the club’s shirts for decades. After all, imitation is the most sincere form of flattery.

Manchester United has long been considered the gold standard of football when it comes to converting the sport’s unprecedented popularity into cash.

The partnership model he developed, which combined 25 official club partners with a variety of regional partners around the world, may have made it an easy target for satire – all those tractor and noodle endorsements – but it has the club too made into a financial powerhouse. able to make a profit even during the coronavirus pandemic.

However, the consumption habits of younger people make this approach increasingly out of date. “We’re seeing a move away from the licensing model,” said Wise. “We know Generation Z and Millennials hate being sold to them. That means it’s no longer enough to stick a club’s badge on something and assume that fans will buy it out of loyalty. “

Instead, partnerships need to feel “authentic” and the content they advertise needs to “tell stories”. That authenticity was the logic behind the Juventus rebranding, not just its crest but the entire visual personality of the club, from its social media – using a bespoke font – to its branding.

“It was about putting football in the broader entertainment framework,” said Ricci. “We see our competition not only as clubs, but also as things like the games industry.”

For the partner, the attraction is obvious. Football has a reach that no other aspect of culture can match. Cristiano Ronaldo has more followers on Instagram than anyone else on the planet. Lionel Messi may be lagging behind his rival there, but it will be some consolation that he is at least ahead of Beyoncé.

Likewise, Juventus has a name recognition that a brand like Palace can charge. The difference is that football has to give a little more and more. It has to accept what Grimaldi calls “strategic design,” the idea that design itself can change consumer behavior and expectations.

“The rebranding wasn’t a way to be cooler or more contemporary,” said Grimaldi. “It was an opportunity to show that you understand the verbal and visual codes that you need to adopt if you want to be understood in other rooms. For example, to work with Palace you need to adopt the design codes of your world. “

It’s a slow burn, however. Four years after being renamed, Juventus is unable to pinpoint an immediate financial recovery that has traditionally been the main motivation and measure of everything a football club does. According to Ricci, looking at the club’s books, it’s hard to isolate what is a consequence of the rebranding and what is the result of winning trophies or signing Cristiano Ronaldo.

However, he is “absolutely convinced” that it was worth it. Internally, the new identity gave the club a sense of direction, he said. Outwardly, the outrage over the new badge subsided pretty quickly: signing Ronaldo and scooping up another handful of Serie A titles meant the club’s traditional fans didn’t feel alienated.

At the same time, it meant that Juventus had become more than a team, also more of a sportswear brand.

It is still occasionally possible to purchase one of these original pixelated, acid green Palace jerseys in the thriving streetwear resale market. Prices start at several hundred dollars, far more than even the latest Juventus jersey. And how the team performs on the field doesn’t make the slightest difference.