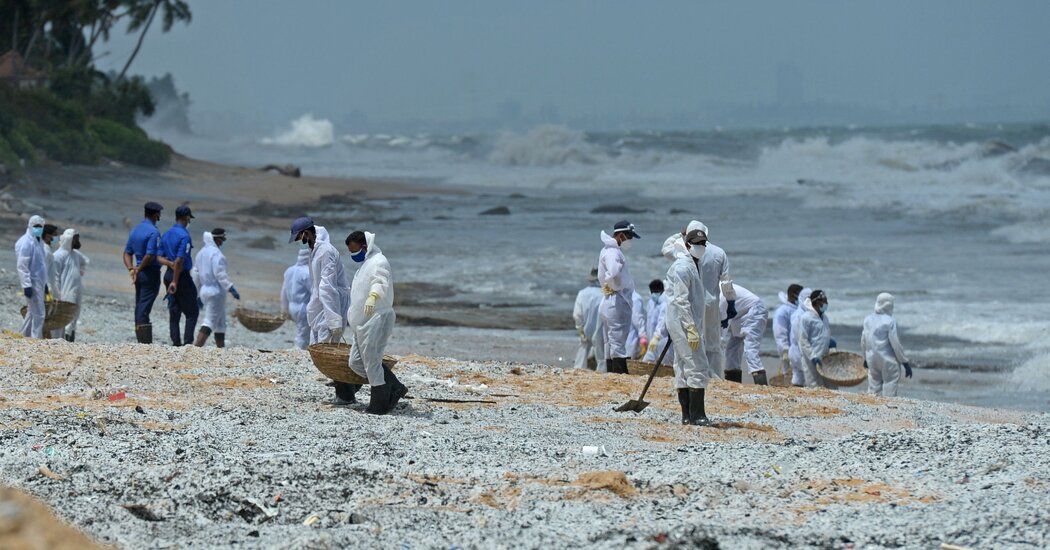 COLOMBO, Sri Lanka – Sri Lankan authorities have launched a criminal investigation into the crew of a cargo ship loaded with toxic chemicals that has burned off the coast of the island nation for 12 days, spilling debris into the sea and polluting the country’s beaches.

Several tons of plastic pellets carried on the ship washed ashore, and the Sri Lankan Marine Protection Agency described the spill as “possibly the worst beach pollution in our history.” Security guards have been deployed to search the country’s beaches for pellets used to make plastic bags, and fishing has been discouraged for miles along the coast.

A Sri Lankan Navy spokesman said the fire that broke out aboard the MV X-Press Pearl on May 20 had been contained, but thick black smoke still rose from the burned containers on the ship’s deck on Tuesday.

The ship was loaded with 350 tons of oil and a combination of heavy oil and marine fuel. Captain de Silva said it was “too early to say anything about an oil spill” but warned that there was “still a possibility”.

“This is one of the worst marine disasters in Sri Lanka,” said Dr. Asha de Vos, marine biologist. “Our only salvation is that there was no oil spill. When that happens, it will be incredibly tragic. “

X-Press Feeders, the company that operated the ship, said nitric acid leaked from a container on board long before the ship entered the waters off Sri Lanka, a teardrop-shaped island near India.

The ship’s crew requested to be allowed to unload the leaking container at two earlier stops in India and Qatar, but were refused because the ports lacked the “technical facilities or expertise” to “deal with the leaking acid”, according to X-Presse Feeder .

The police questioned the ship’s crew and sent contaminated water samples to laboratories for analysis. Of the 25 crew members rescued and placed in quarantine facilities, two had to be treated for injuries sustained during the evacuation and one tested positive for Covid-19, the ship operator said.

While authorities try to pinpoint the cause of the fire, residents living along the coast near the capital Colombo have begun major clean-up operations.

“I’ve never seen anything like it,” says Dinesh Wijayasinghe, 47, an employee in a hotel in the coastal city of Negombo. “When I first saw this about three to four days ago, the beach was covered in these pellets. They looked like fish eyes. “

Mr. Wijayasinghe said Sri Lankan security guards have been collecting up to 200 bags of plastic pellets a day since the fire started.

“Even so, more and more are being washed ashore,” he said. “We’re told we’re not going to this area. So let’s stay away. “

Dr. De Vos, the marine biologist, said the amount of plastic found on the island’s west and south coasts was worrying

Plastic pollution, he said, can pose a threat to humans and animals, including endangered species like turtles that hatch their eggs on the beach.

“The pellets can soak up and absorb the chemicals from the environment,” he said. “That’s a problem because if we eat whole fish, we’re also eating those chemicals.”