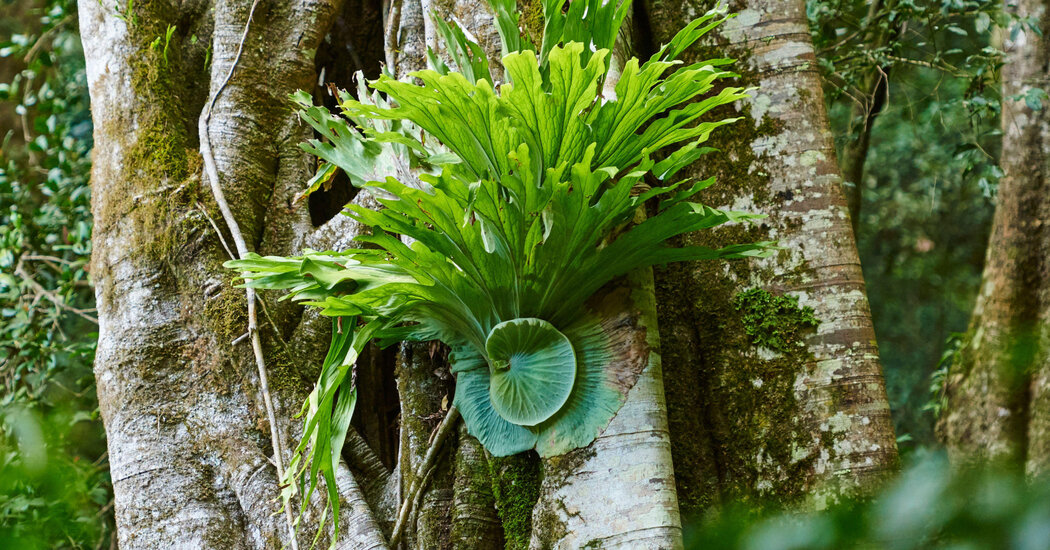 KC Burns’ favorite days of research are those when he puts on his backpack and walks into the wilderness with no plans. While hiking on the Australian Lord Howe Island, he came across a cluster of staghorn ferns. They’re common potted plants, but in nature they grow in dense colonies that cling to tree tops. In the stunted forest of the volcanic island, these treetops are at eye level.

“I almost looked beyond it,” said Dr. Burns, a biologist at Victoria University of Wellington in New Zealand. Then he took a closer look and found that the plants in the colony were doing various jobs in order to survive. Ferns that grew taller had waxy fronds that seemed to draw rainwater into the center of the colony. Farther down the ferns grew spongy leaves that were damp to the touch. Some plants did not reproduce at all – they seemed to have dedicated their lives collecting water for their neighbors’ knotted roots.

Dr. Burns noticed that the ferns work together as a kind of superorganism, perhaps like bees in a beehive.

“I sat down and thought, oh my god” he said. In an article published in Ecology last month, Dr. Burns and co-authors suggest that colonies of the staghorn fern Platycerium bifurcatum exhibit a type of collective behavior known as eusociality. So far, scientists have only recognized eusociality in some animal species such as bees or ants, which live in colonies and share their work.

To measure how ferns split up the work, the researchers examined plants that grew in 24 colonies at different heights. They counted two types of leaves on each plant. One species they called nest fronds are round and usually brown and clasp the tree like cupped hands. The other fronds, long, green and forked like antlers, can form spores on their underside that will become the next generation of ferns.

Plants closer to the top of each colony had more spore-bearing fronds. Plants near the ground had more of the bowl-shaped, non-reproductive nest fronds. About 40 percent of the individual plants did not reproduce at all, such as worker bees.

Next, the scientists cut wedges out of nest fronds, dried them, and then soaked them in water to measure how much they absorbed. They found that nest fronds were more absorbent from the bottom of a colony.

Since the roots of the colony grew in a tangled network, these spongy leaves could help the entire colony stay hydrated. The scientists found that larger colonies (the largest they studied contained 58 individual ferns) had more spore-bearing fronds per head. Living in a large group could improve fern fitness.

Most of the groups are families. “We quickly realized that genetics are important,” said Dr. Burns, since eusocial animals live in closely related groups.

When researchers analyzed the DNA of 11 colonies of ferns, they found that most of the plants within a colony were as closely related as possible: they were clones. New plants arise from buds in the root systems of others, said Dr. Burns.

Being clones “means that the different individuals have genetically aligned interests,” said Guy Cooper, an evolutionary biologist at Oxford University. By helping a neighboring clone, a plant is also helping its own genes to survive.

Dr. Cooper said he would like to know more about the life cycle of a colony and how interdependent each fern is.

While staghorn ferns are not as social as bees, “it was very cool to see that there could be similar types of complex social behavior in plants,” he said.

He also pointed out that some plants that spread through cloning are viewed as one individual, not many. For example, aspen trees sprout huge clone groves from a network of roots. An aspen forest in Utah, nicknamed Pando, is sometimes referred to as the largest single organism in the world and covers 106 acres.

“Then you have to think about a few more philosophical questions as to whether they are different individuals,” said Dr. Cooper over the ferns. Perhaps the ferns in a colony are more like the limbs of a body than the bees in a beehive.

However, cloning does not explain the full story of staghorn ferns. In some colonies on Lord Howe Island, Dr. Burns and his colleagues unrelated plants. They don’t know how these ferns became part of the canopy communities.

Plants are some of the most flexible living things on earth, says Karen Kapheim, a biologist at Utah State University who studies the evolution of social behavior in bees. Perhaps it’s not surprising that a fern could also develop social tendencies, she said.

Science continues to reveal more about the behavior and communication of plants, said Dr. Kapheim. “I think the addition of social behavior fits into this new, emerging understanding of plants.”