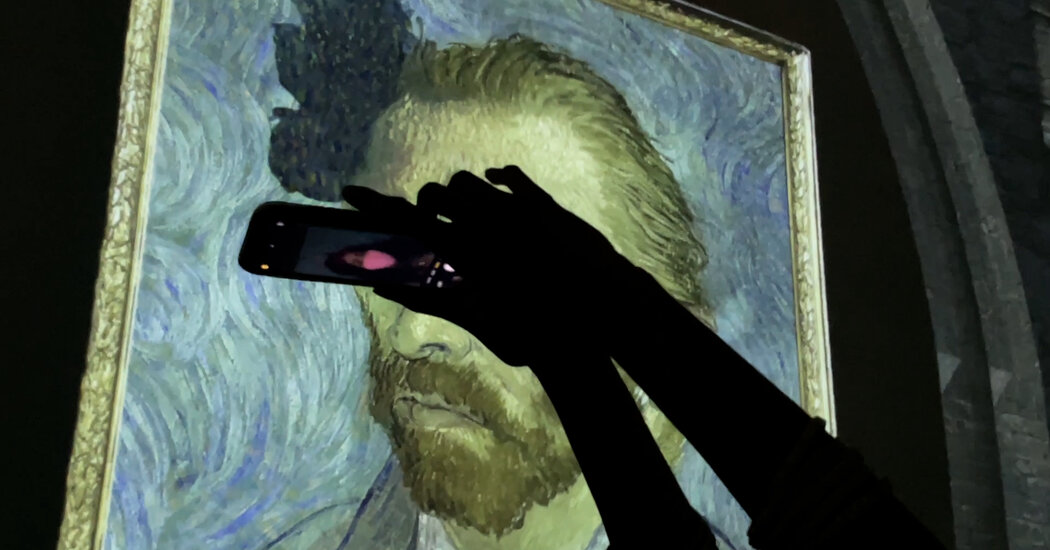 Babies do not develop stereoscopic vision in the first few months of their life; They have difficulty perceiving depth and dimension, and therefore tend to have swirling shapes and bright colors. You and others with similar tastes will take great pleasure in the latest, virally broadcast spectacles of our culture that make fin de siècle French painting a fascinating treat like a nursery mobile.

Vincent van Gogh, whose body is moldy in Auvers-sur-Oise and his paintings are no longer copyrighted, has been dragged into a new kind of immersive exhibition in recent years that reproduces his troubled Provence paintings as wall-filling animated projections – you can saw her on Instagram or on a Netflix humiliation called “Emily in Paris”. The Franco-Dutch artist has always been a big box-office magnet (the Van Gogh Museum in Amsterdam attracted 2 million visitors in 2019), but a traveling exhibition of paintings takes years and costs millions, and reputable museums do not loan their works to a for-profit venture.

What some entrepreneurial exhibitionists have found is that many of us are less attached to van Gogh’s paintings than to the mythology that surrounds them. And that you can exhibit cheaply.

Now these “Starry Night” -filled rooms have arrived in the city that “Starry Night” actually belongs to – and in fact we have about 20 other van Goghs here in New York, who are between the Metropolitan Museum of Art and the Museum of Modern Art and the Solomon R. Guggenheim Museum. In the fall, these real Van Goghs share the island with two post-impressionist fairground attractions, one on each riverside of Lower Manhattan, vying for dominance in Google search results.

Like Vincent, I also suffer for my art, and so I have visited both of them. When you’ve decided to try it out, head to the east side, which has graphics of significantly more sophistication. (Adult tickets range from $ 36 to $ 55, and go up with various fees, surcharges, and rush. The MoMA is $ 25 and the Met is what you want for locals to pay.) Whether you attend one or both , You should bring a fully charged card camera phone; some may also enjoy a psychedelic addition, and in fact the Eastside location is planning to install an absinthe bar later. Sensual selfie backdrops take precedence over intellectual engagement here, so you might as well make the most of it.

At the Eastside location, which was designed by Broadway set designer David Korins, three consecutive rooms show the same video projections designed by Massimiliano Siccardi. Scattered mirror objects reflect off the screens; You sit on the floor, on a couple of benches, or (if you blush) on a rented pillow.

On the west side, the projections fill a single, much higher room that is furnished with beach chairs. A narrator with an English accent drones Van Gogh quotes over the projections on the west side; the Eastside show is not told, instead it is supported by a trip-hop remix of Samuel Barber’s “Adagio for Strings” and, what is even stranger, by Édith Piaf, who belts out “Non, je ne regret”. The West Side Show has more introductory materials, although you could really just read the van Gogh entry on Wikipedia while you’re with each one.

Both exhibitions emphasize van Gogh as a lonely, tormented genius rather than a historical figure, and both imply through their treatment and exposure that his thick outlines and non-local color were a spontaneous outpouring of his soul. Fair enough, if you don’t want to trace the evolution of the painterly style in 19th century France, but even the rudiments of Van Gogh are not easy to capture in photographic reproductions.

If you go to MoMA to see “Starry Night” or the Yale University Art Gallery (free entry!) To see “The Night Café”, you can spend as much time as you want, Van Gogh’s mastery to examine in the impasto style – that is, the thick application of paint that gives the pictures their nervous, shuddering quality. In these wall-sized screen savers, impasto must be imitated by movement: dancing brushstrokes, falling leaves, fluttering crows.

The Westside show’s animations are rudimentary and have choppy transitions that reminded me of the Solitaire app I used to play in Windows 95. The Eastside show is cleaner and sexier, if not more sophisticated than the flat-screen visuals in airport terminals or sports stadiums.

In both cases, the digital reproductions – especially the street scene “Café Terrace at Night” from 1888 in Arles – are strongly reminiscent of the escapist fantasies of the anime and the associated childish moral feelings. In contrast to the immoderate passions of the film “Lust for Life” from 1956 or the biopic “At Eternity’s Gate” from 2018, these selfie chambers are as benign as the Japanese animated film “My Neighbor Totoro”. The personal agony and social tensions of art both dissolve into a fog let’s pretend; this van Gogh is less an artist than a craftsman from other worlds. (A “universe” as Marvel or Harry Potter fans say.)

As for technology, although these immersives have been touted as breakthroughs in exhibition design, room-filling cinema projections go back many decades. The shows go back in particular to multi-projector attractions at the World’s Fair in Queens in 1964 and Expo ’67 in Montreal, throwing humanistic visions of the future in all directions. What is new today is something different: not the pictures on the walls, but the phone in hand. Individual deepening instead of collective amazement is now the order of the day. From every angle, fill your phone’s backlit screen with glowing images and there is more than enough room to cut out other visitors and just frame yourself.

Is it all worth your hard-earned guilders? The dip on the east side takes about 35 minutes, the dip on the west side takes about an hour. Not long for a ticket this expensive, but you can stay as long as you want, and both have sideshow to add value. On the west side there is a 3-D replica of van Gogh’s Arles bedroom, a painting station for children, and a virtual reality experience that guides you through a waxy simulation of Arles.

The East Side Show has stalls with sounds connected to colored lights to suggest Van Gogh’s chromaesthesia described in letters to his brother Theo, as well as mannequins wearing shockingly kitschy Van Gogh-inspired clothing. (Where could these clothes adorned with wheat and sunflowers be placed? The Miss Provence pageant? Is there a drag night in Saint-Rémy that I don’t know about?) Also a bar with snacks that sells “to Gogh” what a cute joke is that only works in America – the French pronounce his name “van GOGUE”, the Dutch “fun KHOKH”, and Diane Keaton in “Manhattan” prefers “van GOKH”, the last consonant from the contemptuous Throat thrown.

Van Gogh (alongside Ingmar Bergman and Gustav Mahler) nominated Keaton’s character in “Manhattan” for her “Academy of Overrated”, and there is a fish-in-a-barrel version of this review that could end: Painting is not a spectacle, and van Gogh is more than just decoration. Even the most narcissistic-friendly art installations of this era – Yayoi Kusama’s “Infinity Rooms”, Random International’s “Rain Room” or the captivating surroundings of Miami’s Superblue – are at least original works with a greater goal than artistic brand activation.

Even so, after a few hours in these sensory worlds, I had to believe that the millions of visitors who enjoy these immersive Van Gogh displays will benefit. Great art has a speechless and irreducible quality, a value that goes beyond communication or advocacy. And if the public finds this quality more directly here than in our traditional institutions, we should perhaps ask ourselves why.

Have our museums and galleries downplayed the emotional impact of the art they show too much? In Gallery 822 of the Metropolitan Museum of Art one can stand in front of van Gogh’s “Wheatfield with Cypress Trees”, the clouds that are churned like waves and whose rising green is bordered by trembling blacks. I want everyone right there in the thick grooves of the oil paint to discover the wonder and liveliness of art that doesn’t need animation. There has to be a way to get people back to this discovery, even if some of us take a selfie afterwards.