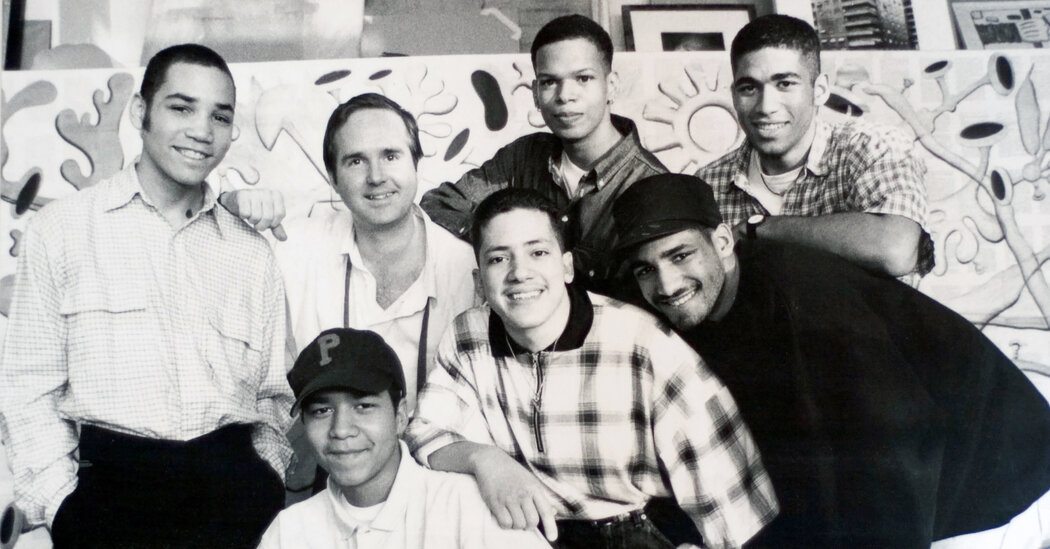 HOBOKEN, NJ – As the name suggests, the Kids of Survival went through a lot before a pandemic ever struck. Overcoming obstacles is what they do. Except now, they’re not children anymore.

What began as a program for young people with learning disabilities in the South Bronx in the 1980s quickly developed into a successful art collective called Tim Rollins and KOS (Kids of Survival), whose works are in the collections of major museums. Now it consists of four middle-aged men: the brothers Angel Abreu and Jorge Abreu, Rick Savinon and Robert Branch.

Mr. Rollins, the artist and educator who founded the group, died in 2017 at the age of 62.

The current members started the group between the ages of 12 and 16 and all had changed their lives through the experience, overcame difficult circumstances and achieved success not only with the collective but also in their own careers.

“Our survival is art,” said Mr. Savinon, who met Angel Abreu and Mr. Branch in their small studio and clubhouse here to discuss their improbable life in the arts. “That’ll get us through.”

Several works they contributed to hung on the walls, including “The War of the Worlds (based on HG Wells)” from 2004, which featured pieces of national flags. Everyone wore masks, but the chairs were in a tight circle – it had the feel of a family vacation. (Jorge Abreu had planned to attend, too, but tested positive for the coronavirus at the last minute and stayed home.)

At an intersection with no Mr. Rollins at the helm, they restarted as Studio KOS

A new exhibit at two Wexler Gallery locations – both the main Philadelphia area and the satellite area at the New York Design Center on Lexington Avenue by appointment – is on view January 15 through March 20.

The latest piece on the show is the video “Invisible Man (After Ellison)” (2020) with the letters “IM” superimposed on the text from Ralph Ellison’s novel “The Invisible Man”, which is part of a series that goes back more than 20 years .

The square font “IM” comes from the last two letters of “victim” in a late 1990s Daily News headline about urban violence. The collective lost one of its members, Christopher Hernandez, in 1993 when he was killed in his South Bronx home after witnessing other murders. He was 15.

Studio KOS developed the latest iterations of Ellison’s works as part of a series of interactive video sessions, including those with current students in Philadelphia who are roughly the age of the members of the collective when they first started making art. The workshops “Collaborative Workshops for Transcendence through Art and Knowledge” are a form of prepayment that also helps the group to point itself in a new direction.

In an endless loop on a monitor, “Invisible Man (After Ellison)” (2020) runs through different versions of the image, many of which were created by the students using Google Slides in the workshops. The Walker Art Center in Minneapolis took place in September. More are planned for 2021.

“These kids are ready to explode creatively,” said Brooklyn-born Mr. Savinon, 49, who works as a designer in a variety of fields.

One of the students who attended the Walker workshop, Tylia Kennedy, a 17-year-old high school junior who lives in Minneapolis, made a slide with “contrasting colors and lots of yellow,” adding that the event “really opened my mind . “

The surge in the Black Lives Matter movement last year sparked the current direction of Studio KOS. All four current members have Dominican heritage, and the collective has always consisted largely of black and Latin American students.

“We wanted to revisit works by black writers,” said Mr. Branch, 43, who leads a team of videographers at Columbia University and teaches at the School of Visual Arts. The link between Black Lives Matter and Ellison’s book, he added, was that they were both about the “battle for sight.”

The video sessions were due to the inability to meet regularly to make art during the pandemic. This is an example of the ingenuity that Studio KOS has become known for. Eventually the collective began in a partially boarded-up classroom with art material from public schools and made its way to the Venice Biennale and the cover of the Art Forum.

“We’ve expanded in ways we might not otherwise have,” said Angel Abreu, 46, who lives in Montclair, New Jersey but recently taught at Deerfield Academy prep school in Massachusetts.

His younger brother agreed. “That’s part of being in KOS – being able to walk through the fire,” said Jorge Abreu, 41, a Brooklyn-based writer and poet, on a phone call.

What connects the most recent work to the earliest phase of KOS is that it is based on literature and the empowering act of reading. Much of the collective’s production during its nearly 40-year existence has picked up pages from books.

Many of the children who participated in Mr. Rollins’ program were dyslexic, and the transformative power of words still fuels their mission.

“I was dyslexic,” said Mr. Branch. “That’s why the pages are symbolically important to us.”

A prominent example can now be seen in the Museum of Modern Art: “America VIII” (1986-87), among the most famous works by Tim Rollins & KOS. The nearly 14 foot long piece, a watercolor and charcoal on pages from Franz Kakfa’s 1927 novel America, has the quality of a large-format, lighted manuscript with riffs on the book’s subjects, including trumpets rendered in gold paint. Roberta Smith, in a 1989 New York Times review, called out “radiant grillwork, a golden gate of overlapping, intertwined trumpets that are more eccentric, mutant and suggestive than their neighbors”. She added that the group’s collaborative method “upsets the myth of the isolated artistic genius that has prevailed since the Renaissance”.

Like many of her larger works, the pictorial plane is full of shapes that reflect the many hands of a collective, but the composition is neat, even serene.

“That’s why KOS works – it’s like an orchestra,” said Ugochukwu-Smooth C. Nzewi, the curator of MoMA, who selected the work from the permanent collection for a gallery “The Sum of All Parts”. “They were the first brothers before they became artists.”

The MoMA education department is organizing a zoom session with Studio KOS as part of the Art & Practice series, which is to take place on February 25th.

The particular weirdness of doing art as a group activity – sharing exactly who is doing what – is something the four artists don’t think too much about after starting out as kids.

“Check your ego at the door,” said Mr. Savinon. “We always have.”

As KOS membership grew and decreased over the years, they simply adjusted the assignments to suit everyone’s strengths and moved the studio from the Bronx to Chelsea and then to Hoboken.

“Robert can’t paint, and that’s why we make fun of him,” said Savinon – teasing in this group is associated with membership.

Some skills were evident from the start. “I could draw like a dream,” said Angel Abreu of his 12-year-old when he was a student at Intermediate School 52, which was just three blocks from his home.

But he added that the blocks were “littered with stereotypical things from the mid-1980s in the Bronx – prostitutes, drug trafficking, all kinds of crazy things.” The abbreviation KOS was chosen by the group in part because it sounded like “chaos”.

“I showed up in the studio with my Crayola watercolor set,” he recalls. “At the time they were working on a large painting for PS 1. The studio burst out laughing and I was so embarrassed. But I said, “This is home.”

Later, as a student at Deerfield, Mr. Abreu faxed drawings to Mr. Rollins in order to stay involved in the work of the collective.

A few girls have joined over the years, but mostly it was a boys club.

“When everyone was sexualized, there was a different energy in the studio,” Abreu said. “The idea of ​​having three or four girls under 15 boys in this studio was a strange thing. But the few girls who were there really made a difference. “

All members have stories of their impressive reactions when they became the center of the art world as teenagers. The aha moment came for Mr. Abreu when he saw “America VII” on the walls of the Philadelphia Museum of Art at the age of 15.

In the years since then, they have pondered Mr. Rollins’ influence; Mr Abreu noted that most of the children in the program had never been to a museum before they came to KOS

The tricky politics of race – Mr. Rollins was a white Maine man who recruited black and Latin American children, with just his name in front and center, like the lead singer in a band – has been noticed by outside commentators over the years, however The current members only expressed solidarity and gratitude.

“He was on a mission but he wasn’t a missionary,” said Mr. Branch of Mr. Rollins.

Jorge Abreu called him “a father figure, a mentor and a friend”, but that also meant great difficulties in his absence.

“He was the core,” added Mr Abreu. “It was hard to go on without him. At the same time, there is always a point at which the master teacher hands over the baton. “

Studio KOS is going back to its roots on its own by communicating with art, not just creating it.

“One of the cheesy things we do is go to the MoMA and sit in front of a Pollock or a Rothko and just get lost in the painting room,” said Branch.

And the fact that her own piece isn’t hanging too far makes her proud.

“Our work stands alongside great art in museums,” said Branch. “We have something to say.”