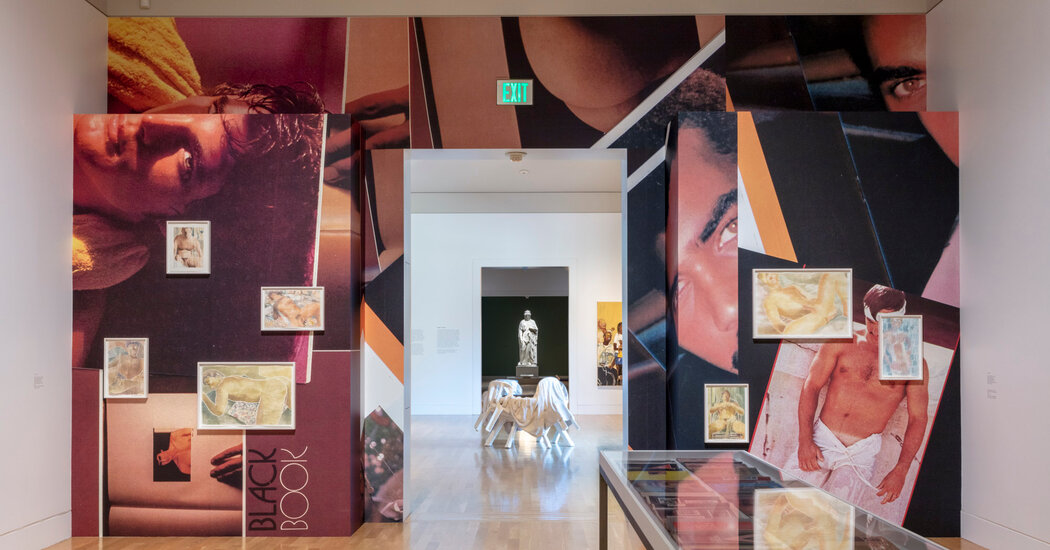 SAN MARINO, California. – The side by side is noticeable. In a gallery, Thomas Gainsborough’s classic oil painting “The Blue Boy” from the 18th century peers out of the ornate walls, which has just been extensively restored. In another gallery, an installation by Los Angeles-based artist Monica Majoli examines Blueboy magazine, one of the earliest gay publications in the United States, using sultry images of scantily clad young men.

When did HD get hip?

This isn’t the institution you thought you knew for their Beaux Arts mansion, which features an imposing research library and elegant botanical gardens, including one inspired by Suzhou, China. It is now also a hub for contemporary art on the cutting edge.

For the first time, the Huntington Library, the Art Museum and the Botanical Garden, together with the Hammer Museum, presented the “Made in LA 2020: One Version” biennale, in which videos, films, sculptures, performances and paintings by 30 Los Angeles artists.

The show, which opened when the visiting museums were finally able to welcome the public back on April 17, is clearly a departure from Huntington’s disease.

While the museum presented living artists such as Alex Israel in 2015 and Celia Paul in 2019, “Made in LA” is the most ambitious exhibition of contemporary art to date. And the show is an attempt to reach new audiences, diversify the program, and showcase more color artists.

“It’s a shot over the bow,” said Christina Nielsen, who became director of the Huntington Art Museum in 2018. She sees the exhibition as “an opportunity to engage with the wider contemporary art community here in LA. It really opens the doors.” ”

The museum is located just outside of Los Angeles on a sprawling former ranch that was bought by railroad and real estate tycoon Henry E. Huntington in 1903. It was opened to the public in 1928 and still provides a formal European setting. Even some of the participating “Made in LA” artists were initially skeptical about showing their work there.

“I thought it would be an odd choice – I was a little worried,” said Majoli, adding that her experience turned out to be positive. “It was almost like rich soil to work with. The work had gotten off to a good start. “

Majoli was impressed by the openness of the museum to her installation, as it deals directly with issues of the liberation and self-determination of homosexuals. She felt free to explore what she sees as “the strange subtext of ‘Blue Boy’, a painting originally inspired by Flemish Baroque artist Anthony Van Dyck.

“It was a great opportunity to put context,” said Lauren Mackler, an independent curator who co-organized “Made in LA” with Myriam Ben Salah.

Artist Jill Mulleady specifically requested that her four paintings be located near Zenobia in the American Art Galleries of Huntington. This includes the diptych “Interior of a Forest”, which refers to a work of the same name by Paul Cézanne and also frames the Xenobia statue.

“It was interesting to work there,” said Mulleady, “not changing the story, but adding layers.”

Artist Kehinde Wiley has spoken about how his paintings of black men in classic royal poses were influenced by his early experiences with the British portraits of Huntington’s disease. “That was really impressive to me because of all the pomp and circumstance,” Wiley told WNYC in 2009, “especially for me as a young black kid.”

To some extent, the Huntington’s Disease “Made in LA” exhibit reflects a larger trend in the art world away from segregated alleyways for different types of art (as the Museum of Modern Art did with the elimination of its discipline galleries) and towards the historical location, art in contemporary spaces (as the Metropolitan Museum of Art and now the Frick Collection in the Breuer building have done).

The Huntington has stepped up its contemporary art initiatives. In 2016, a five-year collaboration began with cultural organizations such as the Vincent Price Art Museum at East Los Angeles College in Monterey Park, California.

The Huntington, in partnership with the Yale Center for British Arts, is presenting a trilogy of shows about women artists curated by New York magazine’s critic, Hilton Als. Starting with Celia Paul, the series will also feature Lynette Yiadom-Boakye and end with Njideka Akunyili Crosby in late 2022.

And while the price tag may remain a barrier to museum goers in Los Angeles (admission is $ 25 for adults, $ 29 on weekends), Nielsen said the museum has occasional days off and emphasized, “It’s cheaper for a family of four to go there the Huntington than to go to Disneyland. “

Even greater efforts are needed to make the museum more diverse in terms of audience, program and attitude. (Los Angeles Times art columnist Carolina Miranda recently asked whether the Huntington’s disease could “evolve into the post-George Floyd era” as a “benefactor of the fortunes of the Golden Age”).

Nielsen said that she intends to fill three curatorial positions with colored people and that the museum has acquired more works by artists of color. The entire HD institution, including its museum, library, and gardens, has an annual operating budget of more than $ 5 million and a sizable endowment of more than $ 550 million.

The Huntington recently completed a new Chinese art gallery located in its expanded Chinese garden (there is also a Japanese garden). “We are in the San Gabriel Valley, one of the largest Asian and Asian-American populations in this country,” said Nielsen.

In the meantime, longtime museum loyalists have to get used to wandering from staple rooms made of Savonnerie carpets and Sévres porcelain to potentially unsettling installations like Sabrina Tarasoff’s haunted house in “Made in LA”.