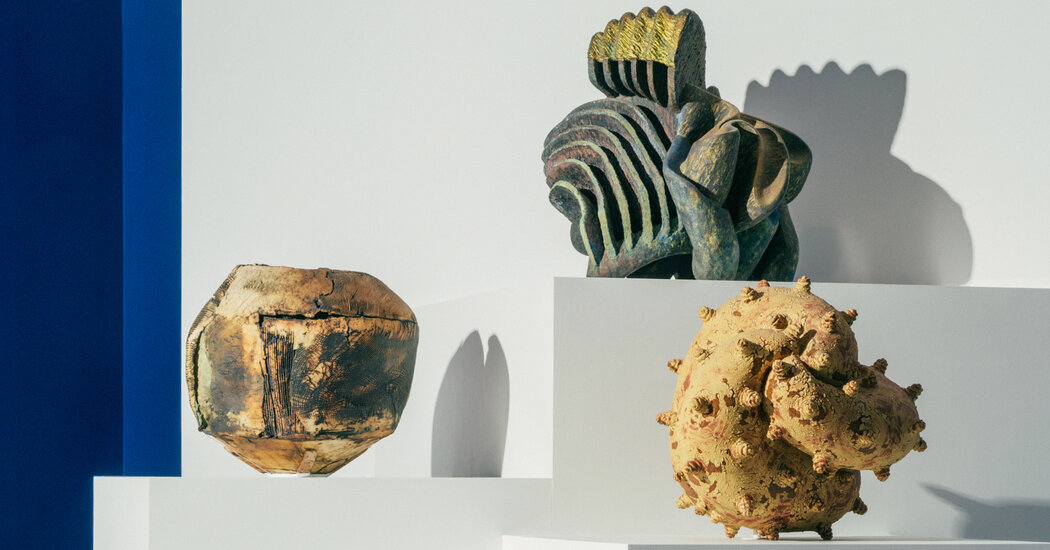 Pottery has come a remarkably long, rough road since the early 1950s. At this point in time, Peter Voulkos, inspired by Abstract Expressionism painting, turned the medium on its head with a heightened scale, ambition and an improvisational energy that mixed the wheel-thrown with hand-made forms. Since then, some ceramicists – Ken Price to Betty Woodman to Kathy Butterly – have simply assumed that their work is mainstream. She and others have appeared regularly in major exhibitions such as the Whitney Biennale and have been adopted by major galleries.

But the mainstream art world is always narrower than it thinks; many ceramists continue to work beyond their limits. Fortunately for them, they had a discerning champion whose devotion can be measured in a sturdy, compelling exhibit at the Metropolitan Museum of Art called Shapes From Out of Nowhere: Ceramics From the Robert A. Ellison Jr. Collection. It celebrates the third groundbreaking gift from this eminent collector of clay pots and objects to the Met – this in honor of the museum’s 150th anniversary. A visit can be humbling, but being humble means being enlightened: I knew less than half of the 49 artists on the show.

The almost 80 objects in the show – out of a total of 127 – come at you from all sides, with unexpected contributions from new creators, unusual examples of well-known and generally aggressive, often bulbous works with a rough surface, which Ellison seems to be drawn to. Quite a few of the objects border on grotesque and perhaps ugly and reach the limits of your always healthy taste. All in all, the show expands the art historical narrative and at the same time represents a person’s passionate vision.

Ellison was born in West Texas in 1932, then moved to New York around 1962 and devoted himself to the painter of Abstract Expressionism without prior training, where he stayed for 25 years. At the same time he bought – purely instinctively – all the ceramic objects that he liked on his walks through the city. He kept buying and learning, and found that many of his purchases were in 19th-century American ceramic art, prompting him to become more choosy and opt for quality over quantity, he said.

In 2009, Ellison promised the Met about 300 pieces, many of which were on display in the newly renovated American Wing that year. All were officially awarded in 2018. Ellison also spread to European ceramics around 1900, mostly French and English, and gave the Met more than 100 examples. Then it went on into the 20th century. Sometime in the 1980s, Ellison recognized his growing collection, not painting, as his calling. It is the classic story of the driven, self-taught collector who becomes an expert and scholar himself. He contributed a long essay to the book accompanying the exhibition, which he published himself. He also photographed all the works depicted in it.

Coming from abstract painting, Ellison was drawn to artists who preferred abstract forms to function. His fondness was confirmed in an epiphanic moment in 1974 when he first encountered the radically abstract work of American Arts and Crafts potter George Ohr (1857-1918), which came to light after being neglected for 50 years. Ohr did his own upending and began improvising in the 1890s, long before Voulkos. He threw dazzling thin-walled vessels onto the wheel and then twisted and squeezed them into twisted, sometimes nicely crumpled, often asymmetrical shapes; Its metallic glazes were also innovative. Ohr’s witty, elegant pots – actually sculptures – became a touchstone for Ellison; six of them form the heart of this exhibition and are the only works he keeps here. But he already admitted: 20 spectacular ears can all be seen in the American Wing.

The work here focuses on the post-war period. The earliest pieces of the gift date from 1945 and are from Axel Salto, an influential Danish ceramist well known in the design world. His fabulously bumpy, folded “vase” – one of the show’s openers – resembles a priest’s robe with its own head. Further on in the show, another great somersault vase appears to be draped in tendrils, testifying to his love for nature. Another influential nature lover is Ruth Duckworth (1919-2009), whose “Untitled (Mama Pot)” conjures up a pumpkin with hints of the female body.

The post-Voulkos generation, mainly handcrafted, is well represented here: Price and John Mason – who were his students; Rudy Auto, Robert Arneson and others.

The new works by Voulkos (three of five are in the exhibition) significantly reinforce his presence in the collection, most notably with a sculpture from 1958 whose stacked shapes and volumes reflect the teachings of Abstract Expressionism. It is appropriately titled “Untitled (Chicken Pot)” – and the pot seems to be losing. The Met gets one of the best Arneson pieces I’ve ever seen: its homage to a Minoan octopus vase from around 1960, which shows the elusive creature in storm-lashed bas-relief and avoids the usual kitschiness of the artist. It’s an unfortunate secret that Price doesn’t have a mature work, but the early one, from 1957, is hauntingly forward-looking.

Newer newcomers like Butterly and Elisa D’Arrigo prefer thin-walled, manipulated pieces that get their tips from the ear. Aneta Regel, born in 1976 and the youngest artist in the collection, prefers emphatically rough organic shapes and bright colors. In this presentation – expertly selected and installed by Adrienne Spinozzi, a curator of the American Wing – more than half of the artists are entering the Met’s collection for the first time. An example is the impressive John Gill, whose hand-building technique leads to geometric surfaces that almost look like chopped out of wood.

In some cases, Ellison chose examples of an artistic career from different eras, as in the case of three stunning works by Peter Callas – a former Voulkos assistant – from 1994, 2002 and 2016, each crispy and tender in its own way. Arnie Zimmerman is represented by a kind of nautical monster from 1994 called “Bladder, Tongue and Tangle”. I’ll take his “Light Green Tangle” from 2013, which, alongside somersaults in a vine-covered vase, can assert itself in one of the best showcases on the show. Here, too, Margaret Israel’s “Vessel”, a shallow basin that is carried excitingly by little more than unwinding, ribbon-shaped clay tendrils, and Howard Kottler’s “Chalice” (1965), thick-lipped, with a base that rotates, are something like a heavy robe that winds around its royal wearer.

Some pieces stagger and whirl around, like Cristina Carver’s “Rottolocus”, Gary Erickson’s “Sobornado” or Anne Marie Laurey’s “Cloud Unicus” – all of which live up to their unmistakable titles. Three works by the Japanese artist Kyoko Tonegawa internalize this pressure and lead to smooth, if leathery, misshapen spheres with open, searching throats. These can be body organs, water sacs made of animal skin or appendixes.

Another group treats the vessel like an irregular canvas, applying conspicuous glazes in brushstrokes, blotches or dabs of color, including the Americans Lynda Benglis and Susanne Stephenson; Alison Britton and Gareth Mason who are both British and Babs Haenen from the Netherlands. Some pieces seem on the verge of collapse, like Ewen Henderson’s vascular mound, which could be made of burlap. Raymon Elozua’s three pieces (from 1987, 1991 and 2001), on the other hand, seem to explode, their colorful ceramic shards are lifted up by structures made of wire or rods, the latest piece apparently being designed on the computer.

And finally, some pieces stand tall, still and symmetrical, like witnesses or icons, especially Kate Blacklock’s “Cross Your Heart” and Syd Carpenter’s “Deep Roots” and “Familiar Figure”. Similarly restrained, but only a few centimeters high, is Mary Rogers’ pale cylindrical “folded shape”. Its thin porcelain walls are reminiscent of an ear, but are twisted on themselves, like an opening flower bud.

Ellison’s donations to the Met now include over 600 clay objects, most of which are divided into three groups. Everyone has essentially opened up new collectibles for this great institution. In contrast to the first two gifts, this latest act of generosity leads the museum into the living future.

Shapes out of nowhere: ceramics from the collection of Robert A. Ellison Jr.