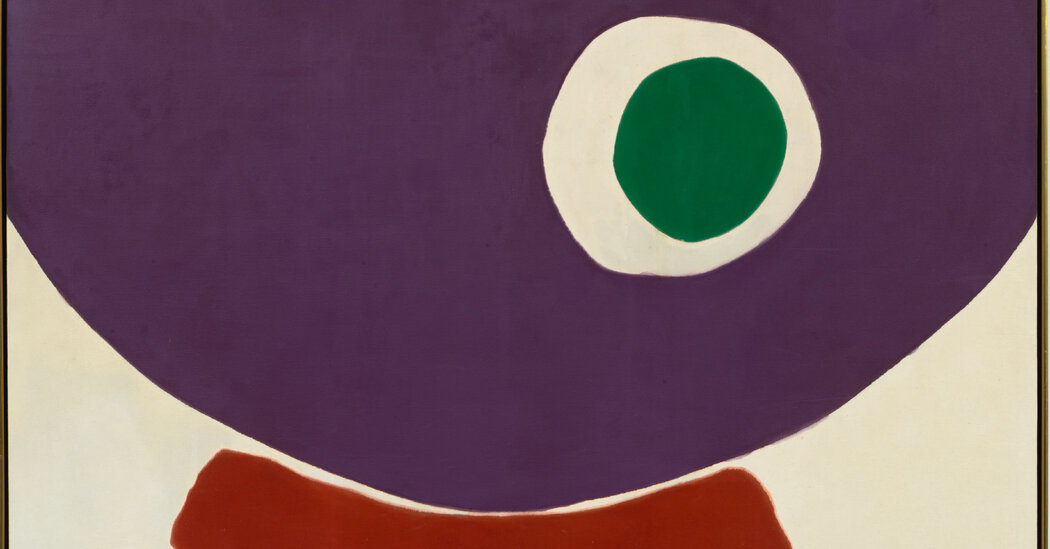 In the early 1960s, Jules Olitski (1922-2007) created some of the most amazing abstract paintings of the 20th century. Many of them are still amazing – though the avuncular sexual innuendos and feminine names in most of their titles are now tired, the stale artifacts of a vicious, clueless era. Both conditions are set by Jules Olitski: Color to the Core at Yares Art in Midtown.

This is the largest exhibition devoted to an important phase in Olitski’s career from 1960 to 1964. In 1958 he had his first solo exhibition in New York, where he showed thick canvases known as “spackle” paintings. Almost immediately, he jumped on the color field painting cart and found a method of stain painting that was bold in every way. Dominated by irregular spheres of saturated color that were either very large, if not threatening, or very small, these seemingly simple works confuse space and size in a visceral, almost sculptural way.

They are purely abstract, with enormous formal power or, as has become known, wall power. But they also approach us with comic élan, such as giant balloons, billiard balls or slices of giant planets. Bundled seeds, pregnant eggs, dividing cells and burrowing creatures and even pimento olives are also suggested, as in the arrogant Cyclopes of “Mushroom Perfume”.

One of the accomplishments of the core paintings is to silently ignore the physical limits of the medium, which means that the image extends well beyond the canvas and is part of a much larger area. In front of some of these images you can feel like you are floating in the weightless silence of space. In works like “Fatal Plunge Lady” (1963), with the tabloid headline for a title, we seem to land, lunar module style, on a beautiful burnt orange astral body orbited by a tiny red satellite and buffered by a green blotch. The effect of such work is stupid, disoriented and impressive and unlike anything else that the Color Fielders have produced.

The field of color took shape in 1952 when Helen Frankenthaler began painting over raw canvas with diluted paint, fusing aspects of Jackson Pollock’s drop technique with Mark Rothko’s dense, brushy blocks of color. The method was quickly adopted by Morris Louis and Kenneth Noland. The style had its own champion in legendary art critic Clement Greenberg and its acolytes who viewed Color Field as the heirs of Abstract Expressionism, the rest is doomed. It was a narrow point of view based on a strictly linear succession of styles, each designed to bring a particular art medium closer to its physical essence. In the case of painting, it was a flat surface with four corners.

By the mid-1960s, Color Field was overshadowed by pop, minimalism, and conceptual art, and Greenberg’s authority dwindled. When he said in 1990 that Olitski was “the best painter alive,” he carried little weight. The color field had been marginalized, at least in New York. As a result, sightings of early Olitskis were rare and exciting, always leaving you, or at least me, thirsting for more.

This thirst is quenched by the Yares show. It contains nearly 30 examples of the core paintings, accompanied by some crude oil pastel studies and, as a sort of footnote, some examples of Olitski’s next phase, which began in 1964 when he started using a spray gun. Compared to the more confrontational, exuberant attitude of the Core works, the spray paintings are elegant and reserved. You behave. Their fields of soft, misty colors are retained, constrained by lines that are brushed along the edges of the canvas. The spray paintings found in countless museum collections across the country come much closer to Greenberg’s ideal and are generally considered to be Olitski’s mature work.

This show is a little too big and uneven, but you can see the evolution of Olitski’s technique, rounded shapes, and kinetic space. You’ll also see how its simple shapes and often surprising color choices balance the color field with the cheer and cheapness of Pop Art and the austerity of minimalism.

The show shows that Olitski gradually colored the painting. In the 1960 through ’62 paintings, he does not appear to be working on raw canvas and covers the entire surface with paint with somewhat chunky results. In “Fanny D” (1960), the first painting in the exhibition suggests colored eggs contained in a pink basket, nest or teether – moving across a lavender field. In “Fair Charlotte” (1961) the colors become harder: two balls of different blue are framed in brown or black (with a hint of pink) and galvanized with a very intrusive background of egg yolk yellow. In the more balanced “Thursday” (1962) the same yellow is egg-yolk-shaped and oven-like, isolated from pink and ultramarine against red.

Sometime in 1962, with works like Fatal Plunge Lady and Mushroom Perfume, Olitski seems to have dedicated himself wholeheartedly to raw canvas dyeing, some of which he left naked and this enlivened things. Its colors shine and the backgrounds open up. The forms float; Paintings breathe.

Olitski’s forms give us formalism in its wildest and funniest form. Academically trained, he saw himself as a kind of old master; Rembrandt was his hero. He drew most of his life from the nude and seldom let you forget the guesswork of the male gaze with the titles of his abstractions. I can hear the defense now: but he loved women. Of course, he only did so in such a limited, limiting way, although his paintings have sometimes been labeled as feminine.

Olitski has been ripe for re-examination for several years. He worked furiously until his death in 2007, moving towards and away from Greenberg’s ideas. And his work is useful for painters: women in particular started looking into color fields in the late 1990s, and there is a renewed appreciation for color. This show begins with a catalog that includes three excellent essays and the most comprehensive chronology of the artist’s life. There is a lot to be done.

Jules Olitski: Color to the core

Louvre Will get Its First Feminine Chief in 228 Years