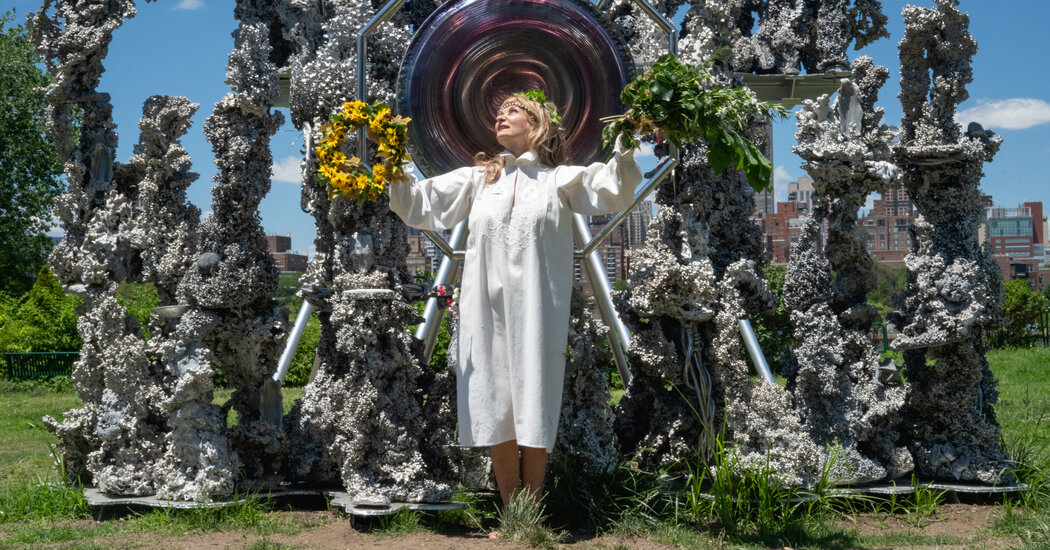 Outdoor sculptures provide some of our most approachable encounters with art, and that is even more so this summer for art viewers who are still reluctant to re-enter galleries and museums, and for those looking for a break from healing and history.

Times critics have drawn your attention to some of the new outdoor additions to the New York cityscape, including David Hammons’ “Day’s End” on the Hudson River, which pays homage to Gordon Matta-Clark’s 1970s public sculpture – actually one Cut in the wall of a crumbling pier – and more than two dozen projects in Riverside Park, from 64th to 151st Streets. And there is Yayoi Kusama, whose “cosmic nature” littered the New York Botanical Garden. Others are definitely worth a visit here.

Melvin Edwards became known as a sculptor with his hard, abstract “Lynch Fragments”, which began in 1963. Made from metal scraps welded together, the series drew from both African sculpture and European and American modernism and perfectly conveyed the terrible, violent, twisted nature of its subject. Brighter Days in City Hall Park in Lower Manhattan, which also houses the 18th century African Burial Ground, a cemetery where both free and enslaved people were buried, serves as a brief overview of Edwards’ larger works . The sculptures in “Brighter Days” are less visceral and monumental than the “Lynch Fragments”, which resemble the abstract, polished steel sculptures by David Smith. Some, like “Song of the Broken Chains” (2020), are elegantly reminiscent of the enslaved ancestors. Others, like “Ukpo. Edo ”from the 1990s refer directly to African precedents. (Ukpo is a Nigerian-made dish made with plantains.) Last summer, a few feet from these sculptures, Black Lives Matter activists took over part of this area, reminding us that the history and struggle that Edwards was in his sculptures are far from over.

Trauma and healing are at the heart of Guadalupe Maravilla’s work, and his “Planeta Abuelx” in the Socrates Sculpture Park pursues these issues both pragmatically and symbolically. “Planeta Abuelx” expands the idea of ​​mother earth into a cross-generational “grandparent planet”. The central object here is “Disease Throwers (# 13, # 14)” from 2021, a towering, twisting sculpture made of cast aluminum and tubular steel with gongs that serve as a kind of head and belly of the pyramid-shaped work. The plant is surrounded by a temporary garden of medicinal plants, along with pumpkin, beans, and corn – vegetables central to America’s indigenous diet – as well as tobacco and roses. Performances in the form of sound baths make “Disease Throwers” ​​an actual (hopefully) therapeutic exercise and not a purely symbolic one. For Maravilla, it’s all personal: he immigrated to this country as an unaccompanied minor during the Salvadoran War of the 1980s and later survived colon cancer. “Planeta Abuelx” connects artist, viewer and landscape and is also easy to reach with the NYC Ferry on the East River (a few minutes from the Astoria stop), which costs as much as a ride on the subway. The project is one of the best that Socrates has presented in recent years.

Across from Socrates, the Paris-born concept artist Christian Boltanski has filled the garden of the Noguchi Museum – one of the most beautiful enclosed outdoor spaces in New York – with 180 small bronze bells in his installation “Animitas”. The title refers to the altars that indigenous people of Chile erected on the side of the road in honor of the dead.

Transparent Plexiglas strips dangle from the bells, twisting and glistening in the sunlight. Inside the museum is a video entitled “Animitas, La Forêt des Murmures” (2016), which documents a permanent version of this work on the island of Teshima in a Japanese inland sea. Boltanski became famous in the 1980s for his blurry and haunting photographs of people, especially children, who died in the Holocaust. (His Ukrainian parents were Holocaust survivors.)

“Animitas” has a similar elegiac quality. Originally installed in Chile, it subtly honored the “disappeared” under the Pinochet regime. The director of Noguchi, Brett Littman, has emphasized that Isamu Noguchi’s own work is brought into conversation with other artists – just as Noguchi did during his lifetime. This project does that wonderfully. “Animitas” is also a perfect counterpoint to Maravilla’s more dramatic installation across the street.

Directly behind the Grand Army Plaza entrance to Prospect Park is a clear geodesic structure surrounded by wire mesh and filled with plants, pipes, and canisters. Mary Mattingly’s “Public Water” (2020-2021) clearly borrows from the futuristic modern designs of Buckminster Fuller – the father of the geodesic dome – and applies them to contemporary environmental issues, especially water. The current structure houses plants from our region and simulates, on a tiny scale, what is happening in the catchments of Croton, Catskill and Delaware, where the drinking water comes from New York City.

Plants and gravity do the work here, mimicking the purification systems that make our water drinkable and nutritious. Mattingly is hardly new when it comes to people and their habitats. That winter and spring, the Brooklyn Public Library hosted an exhibition by Mattingly and artist Dario Robleto on the “habitable future of the earth.” Similarly, Mattingly’s “The Waterpod Project” (2009) was a ship that sailed around New York Harbor and set up a kind of gentle survival module with a geodesic dome as the central element. Part of what Mattingly brings to the eco-art conversation is good looking objects that will make you partake in saving the planet as opposed to all of the alluring objects that are destroying it.

Sanford Biggers’ giant “Oracle” (2021) holds the prominent entrance to Rockefeller Center on Fifth Avenue like a celebratory sentry and is both frightening and cheerful. The 7 meter high bronze work is part of Biggers’ series “Chimera”, which deals with different historical, artistic representations of the body, myths and power. The sculpture is clearly based on the aesthetics of African masks and great Afro-American sculptors like Augusta Savage, but “Oracle” also combines African and European sculptural traditions. The figure has sagging, drooping eyelids and is holding a torch, like the Statue of Liberty. Just around the corner are other works from this campus-wide installation by Biggers, including a series of blue flags entitled “Seigaiha” (2021), which represent the elements of wind and water. (“Seigaiha” is a traditional wave motif that first appeared in Japanese art in the 6th century.) This is a rather light gesture compared to “Oracle” – which even comes with a Spotify playlist. The tracks titled “WeAreTheOracle” include Sabu Martinez’s optimistic Afro-Cuban jazz piece “The Oracle” and “The Message” by the British funk band Cymande from the 1970s. After almost five and a half hours, you can still experience the oracle powers long after viewing the monumental sculpture by Biggers.

Rashid Johnson makes monumental sculptures, like the one that just appeared in “Grief and Grievance” at the New Museum, which consisted of an open shelf structure filled with live plants, books, paintings, and objects that celebrated African American culture. “Red Stage” at Astor Place is a sculpture with a different approach: It invites the participants to step onto the stage. “That means you – the artist, activist, agitator, performer, teacher, student, dreamer, neighbor and spectator!” Reads the request from Creative Time, which commissioned the project.

Scheduled attendees so far have included Jason Moran, the jazz pianist, as well as students from the Brooklyn School of Music and land recognition ceremonies honoring the indigenous peoples who inhabited this region centuries before colonialism. An anniversary celebration of the emancipation of enslaved blacks in June had a special schedule, and the weekend of July 4th promises the same. Then the Jewish radical performer Morgan Bassichis enters the stage and shares it with Palestinian activists, racial justice workers and others who want to rethink freedom and the modern nation-state. It’s a big task – but appropriate for a day to commemorate the signing of the Declaration of Independence and to encourage everyone to support other forms of freedom.