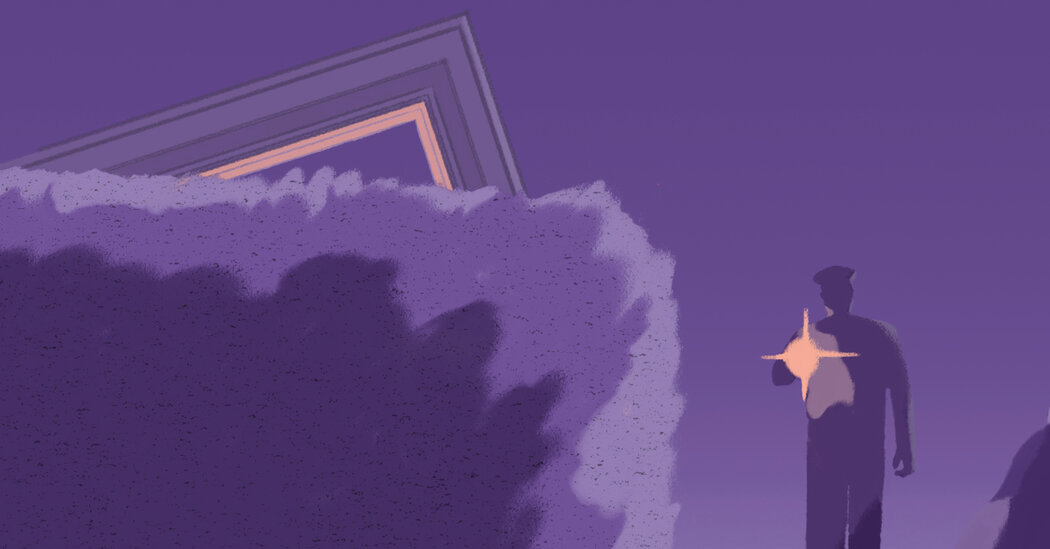 “Two laughing boys with a mug of beer”, a painting by Frans Hals, has been hanging in a tiny museum in Leerdam, a city in the Netherlands, for almost 248 years.

You have to use the qualifier “most” as the painting was occasionally borrowed, moved for safekeeping on arrival of the Nazis and, as many in town know, stolen three times.

It went missing for the third time last August when work began at the conservative value of more than $ 10 million three days before the 354th anniversary of Hals’ death. What remained was a gaping room on the wall of the Hofje van Mevrouw van Aerden museum, a poor house for unmarried women, in which the collection of the 18th century founder Maria van Aerden is on display.

“It really is this painting for some reason and I don’t know why,” said Christa Hendriksen, a councilor in charge of culture in Leerdam, a town of 20,000 best known for its glass processing. “I have no answer to that.”

Indeed, it is surprising, even mysterious, when a work of art is stolen multiple times. Does the brushwork contain a hint of a hidden treasure or a secret code? Could it be coveted by a cult that adores the throat, or maybe beer?

There were certainly other works that were particularly loved by burglars.

Versions of Edvard Munch’s “The Scream” were taken from museums in Oslo in 1994 and 2004. Jacob van Ruisdael’s “The Cornfield” has been stolen from a mansion south of Dublin three times, including once by the Irish Republican Army. Rembrandt’s portrait “Jacob de Gheyn III” has been stolen from the Dulwich Picture Gallery in London so many times (four between 1967 and 1983) that it is known as “The Takeaway Rembrandt”.

However, experts say that some have the notion that thieves steal on behalf of citizens fascinated by the Dutch Golden Age, the motives for such thefts are more likely to be pedestrians.

The works are usually well-known goods. Safe bets. Paintings whose value has been established through previous thefts and the fact that the police tried so hard to find them. In other words, “Two Laughing Boys” may have been stolen again just because it was previously stolen.

“They know they can make money from someone,” said Christopher A. Marinello, founder of Art Recovery International. “You know the minimum value it has brought. They know there could be an insurer. “

Arthur Brand, an independent art detective based in Amsterdam, said thieves often hope to steal masterpieces that they can use as a basis for negotiation if they are ever charged with other crimes. This is how they search the internet for famous thefts from the past.

“This is the one that shows up when you google,” he said.

During the break-in in August, there is a video of two people on a scooter approaching the museum in the middle of the night. According to one theory of the robbery, the thieves climbed a gate into a back garden before forcing a back door and climbing the stairs to the room where the neck was kept. The alarm clock rang at 3:30 a.m.

Police later found an orange rope tied to a flagpole outside, which the fleeing thieves may have used to descend a 10-foot brick wall that was part of the original city fortifications from the garden to the path. The video captured the two people who drove away on the scooter shortly after their arrival. One of them was holding something large, like a painting. (The neck is a little over two feet high.)

When the theft was discovered, it made headlines around the world. The crime had all of the elements: a famous work, a previous owner who had been a wealthy widow, and previous thefts involving a Dutch drug lord, demands for ransom and a stab from law enforcement.

But in Leerdam, where the stolen painting keeps returning like a swan, there is a sense of loss, but nothing that approaches hysteria.

“I felt terrible when I heard that the painting was stolen,” said Mayor Sjors Fröhlich, who expressed his confidence in the police’s recovery efforts.

“It came back the last two times,” he said. “I think we can really get it back.”

The theft was not mentioned on the museum’s website, which is closed to visitors due to the pandemic. The Facebook page instead focuses on volunteers in the garden pruning their mulberry tree and other plantings around the courtyard, where 10 women still live in small terraced houses built around 1772 on the Linge River. Over the years, weddings and municipal council meetings have taken place in Hofje, and the distinctive domed roof of the main building dominates the skyline of Leerdam. (Locals call it their “Sacre Coeur”.)

The construction was financed by the estate of Mrs. van Aerden, the widow of a wealthy Dutch notary, who died in 1764 and who decreed in her will that special attention should be paid to the art collection of her late husband. He had amassed 42 works, some of them by Dutch masters. The will provided that the “honest, decent” residents be given quantities of meat, wheat bread and white wine and that the pictures be kept “neat and tidy” in the Regentenkamer or Regents’ Room on the second floor.

It was also ordered that the poorhouse be run by three regents, all of van Aerden’s relatives. Recently, however, it has been difficult to find relatives, so only two regents run the place with the help of volunteers.

Despite its impressive holdings, the poor house was only opened to the public as a museum a little over 10 years ago. The missing painting is the star of the collection.

Along with Vermeer and Rembrandt, Hals was one of the giants of the Dutch Golden Age. Known for his commissioned portraits of strict officials and wealthy merchants, he also painted figures from contemporary life from the streets that caught his eye, such as the “gypsy girl” or “Malle Babbe” (Mad Meg). Painted for the free market, the appeal of the genre paintings was their freer brushstrokes and joyful immediacy, like the two boys in the Leerdam work, one of whom was staring into a mug of beer.

The picture, completed around 1628 when Hals was in his forties, is funny but carries a moral exhortation. The “pitcher” was a popular phrase that implied a glutton or someone who was always looking for more, and this image became more intriguing with the depiction of drinkers as children.

“There aren’t that many genre paintings by Hals, and this is a relatively early and an incredible piece,” said Anna Tummers, who showed the painting in exhibitions when she was a curator at the Frans Hals Museum.

When the Nazis invaded, the neck and the rest of the collection were removed from the building when the Germans made the poor house their headquarters. The paintings were borrowed from a museum in Rotterdam for decades during the restoration of the Hofje and then hung undisturbed until in 1988 a masked man forced a window of one of the resident women’s shelters on the side of the courtyard. He tied up the facility manager’s wife and had the manager turn off the alarm.

“My father had to open the museum door under threat of a firearm,” said the manager’s son, Jos Slieker, the secretary of the historical society of Leerdam.

Mr Slieker said his father could press a second button to sound the alarm, but the thief managed to get away with the neck and another painting, “Forest View with Elder in Bloom” by Jacob Salomonsz van Ruysdael.

Three years later, the two paintings were returned to Hofje after the insurance company and Dutch authorities paid a ransom fee of 500,000 guilders (more than $ 250,000). According to the Dutch press, they had come into the possession of Klaas Bruinsma, a known Dutch criminal, through a drug-related debt, and after Mr Bruinsma was shot in front of the Amsterdam Hilton in 1991, his bodyguard came to arrange their return. A year later, two suspects, a Dutch carpet dealer and a well-known German art thief, were arrested for theft after their escape driver, a friend, reported. They were convicted and sent to prison.

In 2011, the same two paintings were stolen again. The alarm went off at 3 a.m. Witnesses saw a car – a dark Mercedes or BMW – drive away with dimmed headlights, and police found the neck frame dumped in a hedge.

The thieves apparently heard that a restoration fee could be charged for stealing these paintings. Police got the work back after five months when they were brought into contact with four men who wanted to negotiate the return of the pictures for a fee – around 1.5 million euros. Investigators had an undercover agent representing the museum’s insurance company, and when the four men – all from the Amsterdam area, one an art dealer – showed up, they were arrested.

The men never identified the real thief, despite saying they planned to share the fee with him.

Both times the neck was returned, the museum hung it back on the wall with respect for tradition and lively optimism. “The will states that the collection must remain intact and be exhibited in the Hofje,” said Mr Slieker.

“You have to show beautiful paintings!” said Guus Harms, the lead volunteer at the museum.

The police and the museum declined to explain what security improvements could have been made after the previous thefts. But Mr Slieker said the museum has an alarm and motion sensors. The collection is also only open two afternoons a week and the paintings can only be seen with a guide.

However, it is clear that the security in place, while likely more than adequate for a city museum, is not enough to protect some world-class paintings.

“Leerdam is very small,” said Joost Lanshage, a spokesman for the regional police. “It’s not the Rijksmuseum. It’s just a small museum. “

The good news for the museum is that no one believes the thieves can sell such a famous painting on the open market. So they have to try something different and maybe offer to return the painting for a fee.

“At the moment there is nothing to be heard from the perpetrators,” said Mr Harms. While they were waiting, a replica of the painting was hung on the wall because those dedicated to the museum found the empty space too painful to think about.

Sander van Betten, a Dutch private investigator, said Dutch authorities and insurance companies are reluctant to pay ransom because it encourages theft. Instead, the thieves would have stolen the painting to use it as barter currency in the criminal underworld – with an estimated value between 2.5 and 3 million euros (up to 3.6 million US dollars).

Again, advertising for multiple thefts is likely to have a positive effect on a burglar. Even crooks worry about the authenticity and about not being cheated by a forgery, said van Betten.

The neck, with its solid record of having been taken off the wall in Leerdam, will therefore register as safe.

“It’s a very famous painting,” said Mr van Betten, “and everyone knows it was stolen, so it’s not a fake.”