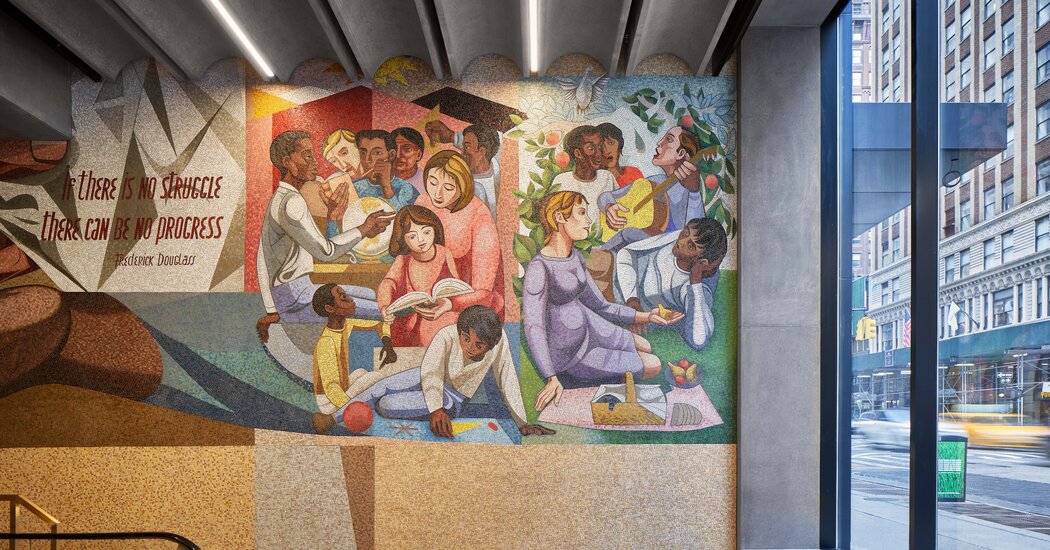 Not far from Times Square, I was walking west one afternoon from Eighth Avenue to look at a mural that I had noticed several times but never really paused to appreciate.

Affixed to the front of Martin Luther King Jr.’s work center at 310 West 43rd Street, this artwork is a rarity: a monumental social-realistic narrative of union progress, depicting human figures in a colorful glass mosaic that recalls that The roots of the technology lie in Byzantium.

The arresting central image of the mural shows two hands, one black and one light skinned, exchanging a leaflet with a quote from the abolitionist Frederick Douglass: “If there is no struggle, there can be no progress.”

“We take great pride in being a labor organization and a social justice union,” said George Gresham, president of Local 1199 of the Service Employees International Union, who commissioned the work for a sheltered niche that turned 15 in 1970 -story headquarters was built. The artist Anton Refregier frames the central picture with vignettes of members at work, on strike, attending classes and playing.

The hands are beautifully sculpted, as are the distinctive faces of his multiracial figures, reflecting membership of the union that has represented health care workers since 1932 and remains the largest health union in the country with 450,000 members now.

The liveliness of this pageant appears undimmed, although the mural itself is waiting for an uncertain fate. In June 1199, SEIU moved to a loft building at 498 Seventh Avenue, just blocks away. A developer plans to demolish the old headquarters to build a 33-story apartment tower.

And therein lies a story of salvation – of a kind – and inspiration.

In 2018, the union leadership asked star architect David Adjaye to design the lobby and public areas on three upper floors of the new headquarters. (The office space was designed by Gensler.) It was shot with Adjaye’s work at the National Museum of African American History and Culture in Washington. (His extension to the Studio Museum in Harlem is under construction.) Although 1199 SEIU was a small project for his company, Adjaye took it on because, as he puts it, he “admires their community involvement”.

Although Adjaye was educated in London and originally based in London, he was born in Ghana. In light of major museum and library projects in Africa, he recently opened a store in the capital, Accra. “It’s my parents’ town, but I’ve never spent much time here,” he said in a video chat. “I just moved the whole family here.”

“The way I usually work is by delving into the history and flow of the organization and physical history,” he explained. While investigating the King Labor Center, he fell in love with the mural associated with the 1199 aspirations as well as Refregier’s embrace of the mission for social justice in much of 20th century art.

Refregier was born in Russia in 1905 and emigrated to the USA, where he studied at the Rhode Island School of Design and with the artist Hans Hofmann. He spent most of his career in Woodstock, NY, and found his artistic voice on the Roosevelt Administration’s Federal Art Project from the Depression-era.

He became famous for a series of 27 murals entitled “The History of San Francisco”, which he painted in the lobby of a post office. It infuriated the fearful anti-communists for depicting some of the city’s worst excesses, including the picture of a white man beating a defenseless Chinese worker in anti-Chinese riots. Today, work is a protected landmark.

While visiting the SEIU mural, Adjaye noted, “It had power and was a relic of hope from the 1960s and 1970s.” He and Gresham agreed to move the mural to the new room. “I wanted it to be registered as a material memory in the new building, a kind of cultural sustainability.”

Stephen Miotto, a glass artist from Carmel, NY, was one of the experts consulted. He recognized the work immediately because he had taken over the studio of his godfather Carlo Rett, who created the original work with his two partners.

In high school, Miotto had been invited to help with the final cleaning of the works when they were installed in 1970. He knew they were taped to the concrete block wall behind them and the entire wall had to be removed intact and somehow installed in the new location. “It was too hard,” he said. He offered to recreate the mural for the new building and the union hired him. His Miotto Mosaic Art Studios, working with partners in Spilimbergo, Italy, used similar techniques and much of the same glass tile that Rett had used.

While not a household name, Miotto’s work is ubiquitous in New York as he has executed artist tiling in around 50 MTA subway stations. One of his favorites is Xenobia Bailey’s “Functional Vibrations,” a cosmology in a rainbow of colors at 34th Street-Hudson Yards station on Line 7.

In the Refregier mural, colored glass tiles were cut individually to follow the lines of the drawing. In this way, tiles represent the contours of a face, follow the curved strands of hair and bring a naturalistic sheet onto a sheet that is held by a nurse behind a patient lying down.

Miotto tracked the original and referenced it with photos he had taken to make sure he hadn’t introduced any color or shape errors. The tiles were laid face down in irregular sections like puzzle pieces and then grouted together. Then the sections were put together on site in the headquarters’ new lobby so carefully that no boundaries are visible.

The reproduction of the mural unlocked for Adjaye is an idea to bring the union’s rich history into the new headquarters in a similarly monumental form. Gresham had shared with Adjaye a plethora of photos from the union’s history in highly competitive battles to try to increase membership.

Instead of framing them and hanging them on the wall, Adjaye decided to transform the photographs into large-format works of art – on a floor-to-ceiling wall scale. He knew about the Cerámica Suro tile factory in Guadalajara, Mexico, which has often worked with renowned artists, and asked its owner, José Noé Suro, if his studio could reproduce these photos in tiles at the desired scale. Yes, by digitizing the images and transferring them to the glaze on two-inch square tiles.

The technique is less meticulous than Miotto’s, but requires exceptional sensitivity as it had to use digital art to reduce the blurring that naturally occurs when images are enlarged so much.

Large-scale printing of the photos on tiles gives a sense of permanence, “as if the pictures were always there,” as Adjaye put it.

Now the reproduced Refregier welcomes the visitors who enter the lobby with glass walls from 1199 SEIU. It lines the side wall of an atrium that has been carved out of the three upper levels of the union offices. The lobby is not long enough to hold the full length of the refregier, so a vignette has been placed separately by health workers at their workstations. The elegantly intertwined, white-clad figures stand in front of the elevators and can thus be viewed up close. “I was damn disappointed that we couldn’t show the whole thing together,” said Miotto.

As the visitor ascends via a staircase or escalator past the Refregier, each floor reveals walls that are lined with new photo tiles. Their exuberant humanity explodes from their grid surfaces – in dramatic black and white in contrast to the chaste colors of the referee.

The 80 images are fascinating, with swarms of people being shown at job campaigns and political protests, depicting key figures from Barack Obama to Jesse Jackson, from Stokely Carmichael to the Jewish pharmacists who founded the union. The photos pay homage to civil rights and protests in the Vietnam War, AIDS activism, Black Lives Matter and the rights of immigrants and the LGBT community. From a union that was largely black and Puerto Rican in its early years, 1199 is “now the United Nations,” says Gresham.

A three-story picture of Rev. Dr. Martin Luther King Jr., speaking to the union, sums up this pageant. Adjaye compares it to a caryatid, a statue that held up roofs in classical architecture.

The king’s centrality reflects a longstanding relationship with the union he called his favorite. Delivering a version of his famous “The Other America” speech to Lincoln Center membership, he said, “I would suggest that our nation would get closer to victory if all of the work emulated what you have done over the years have the fight against poverty and injustice. “He was murdered just a few weeks later on April 4, 1968.

Although some services have been available at the new headquarters since July, most members have not yet seen them due to Covid-19 restrictions. (SEIU has no plans to open it to the public for now either.) Gresham believes this unfolding of union history could be cathartic for the many workers on the front lines of the pandemic.

“The inspiration for our new headquarters was to show our members this legacy, the shoulders we all stand on,” he said. “We don’t want that to be lost.”