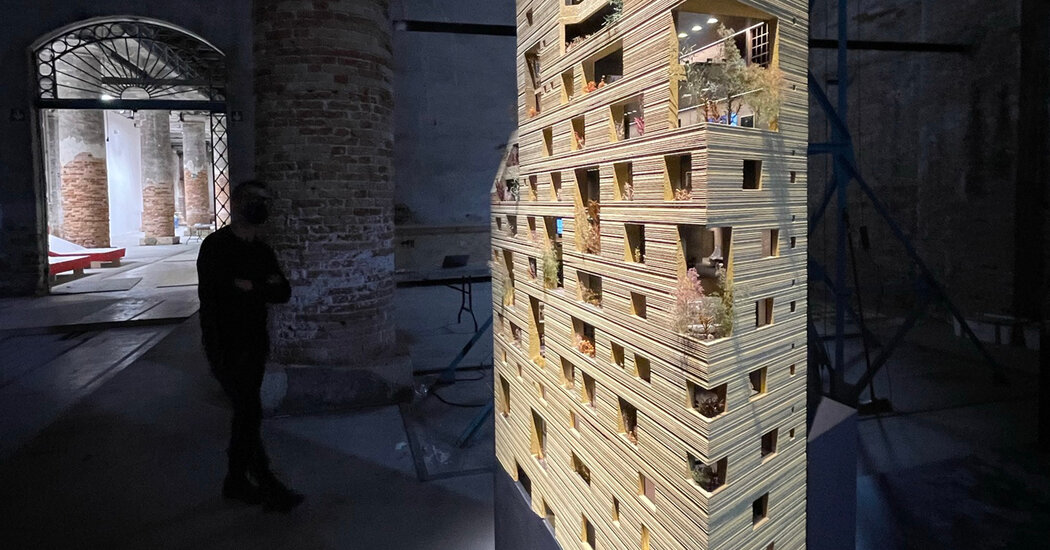 Hashim Sarkis, curator of this year’s Venice Architecture Biennale, developed his theme: “How will we live together?” – long before Covid-19 had scared us to death, before the murder of George Floyd sparked global unrest and before flag-waving rioters hit the US Stormed the Capitol. It is now clear that his choice was remarkably prescient.

After the world was turned upside down early last year, Mr Sarkis’ topic – along with virtually every topic raised on the show – seemed to be growing in stature, complexity, and relevance. And with the significant adjustments made by everyone in the exhibition, the answer from the biennale itself, which opens on Saturday, has become a case study of how to start addressing such questions.

“We now have different eyes on how we see the world because of the pandemic,” noted Sarkis, dean of MIT’s School of Architecture and Planning and an architect with offices in Cambridge, Massachusetts and Beirut, Lebanon. “But the problems are still the same. The pandemic has helped put them on the spot and accelerate the kind of responses that we were previously reluctant to give. “

In a video interview earlier this month, Mr. Sarkis noted that while many logistical adjustments were required to make the show possible, exhibitors did not change the core of their projects in response to world events. The crisis has only made their positions more significant.

For Lina Ghotmeh, a Paris-based architect who grew up in Beirut, Lebanon, responding to crises like the pandemic was a way of life. “You have to be creative. You have to find a way to live and deal with it, ”she said.

Ms. Ghotmeh is one of 112 participants from 46 countries who contribute to the central exhibition of the Biennale. The entry of her company “Sculpture for Living” expands her Stone Garden apartment building in Beirut, which will be completed in 2020.

The sculptural, finely combed concrete building, which is cut through by very large openings filled with vegetation, contains very different forms of living and a cultural center at its base.

This mixture of elements references Lebanon’s history of war and violence while at the same time creating community (or, as Ms. Ghotmeh put it, “orchestrating life”), celebrating and promoting local crafts, and outdoor living that Promotes nature and a sense of hope and healing.

In Venice, Ms. Ghotmeh and her company built a model of Stone Garden that is more than two meters high. There are small videos and photos in the rooms showing how the building was built and showing examples of creativity and resilience in Lebanon.

“We’re trying to go back to what we constructed earlier. based on local needs and common sense, ”said Ms. Ghotmeh, noting that current development models are predictable and no longer sustainable. “As architects, we are critical thinkers,” she added. “We are able to deal with complexity, understand different disciplines and find new ways to design and inhabit the spaces around us.”

This type of work – from design to transformation to transform people, places, and systems – fills the show. The exhibits, which are divided into five scales from the smallest (“Among different beings”) to the largest (“As a planet”), consist of films, photos, drawings, plans, models, digital installations and even whole (albeit temporary ones ) Buildings.

“There is no single source to answer these questions,” said Mr Sarkis. “The Biennale used to be the place where Europe showed what was good and what was bad. it taught the world.

“Now it’s the other way around. It is the world that comes to Venice to show what it does and how we can learn from it together. “

Outside of the central exhibition there is much more – over 60 national projects, collaborations with international artists and museums as well as student work from all over the world.

Not everyone agrees that the Biennale should take place during a pandemic. Even some attendees wondered if flying with attendees and visitors from all over the world makes sense at such a time. However, it is also clear that the orchestration of an event of this magnitude in these unforgiving times has examined and confirmed the subject of Mr. Sarkis. It also sparked a welcome change.

The Biennale was of course supposed to open a year ago. The organizers then postponed it to August 2020 and finally to May 22nd, which only took place after extensive discussion and monitoring.

Covid precautions are in place: online ticketing, temperature monitoring, quantity restrictions, and circulation control, among others. Along with the reduction in travel and other factors, this has meant far more content online than before, and more in-person events are planned for later in the six month duration of the event.

“I think it has shown a certain level of strength and determination to move forward,” noted Roberto Cicutto, who took office as president of the biennial shortly before the pandemic broke out. “We found a way to live with the pandemic and not give up.”

A good percentage of the Biennale attendees – especially outside of Europe – were unable to take part in either the installations or the opening, and large teams of local builders were deployed to make their visions a reality. This, of course, meant a lot of awkward virtual discussions and tested both patience and ingenuity.

Members of the many national pavilions have developed a new level of virtual collaboration by forming the so-called curator collective, which consists of more than 40 participating countries. The group was initiated by Haewon Shin, curator of the Korean pavilion, who connected most of the members online.

Their virtual meetings, which have taken place at least once a month since March 2020, have not only encouraged fruitful discussions and practical solutions, but also brought new elements to the Biennale.

This includes a student competition to design benches from discarded pavilions within the Giardini (main exhibition area of ​​the Biennale); a “Manifesto” expanding the questions on the subject of Mr Sarkis; and cooperation between countries, such as a joint installation between the Russian and Japanese pavilions.

“Under the normal procedure, we would have been so busy preparing our own pavilions that we couldn’t talk to each other,” said Ms. Shin. “This unique situation brought us together.”

Ms. Shin’s pavilion is called “Future School”, a cozy space that is intended for personal and online collecting, learning and exploring. (For both humans and animals – including a bird bath and carpet room for a pet cat, Mucca.)

On its roof, the pavilion will house a common space for the members of the curator collective. “This is our gift to the Biennale,” she added.