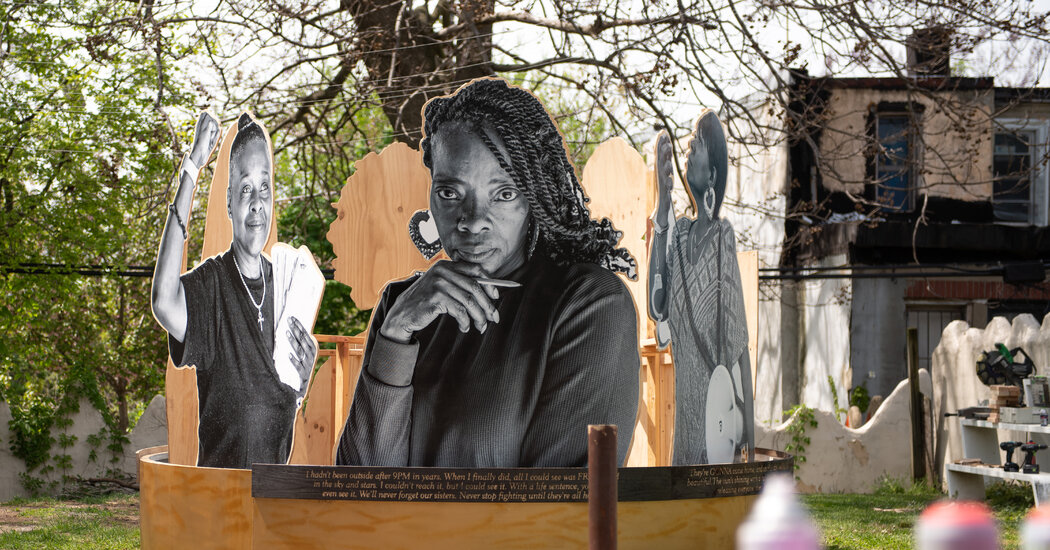 PHILADELPHIA – In part of north Philadelphia, near an underpass and towering staircase painted azure, Ms. Nandi’s house is adorned with images of civil rights heroes and political icons – Malcolm X, Queen Nefertiti, Lenin. This is where Denise Muhammad, known to everyone as Ms. Nandi, and her husband Khalid ran a penny candy store for the neighborhood kids from their living room for 20 years, but it was much more than just selling Tootsie Rolls.

When the children couldn’t count their change, the couple taught them to do so. If they couldn’t read a quote from Marcus Garvey on the wall, they would help them learn to read. “Ask every child in the neighborhood where Ms. Nandi’s house is,” she said recently one afternoon. “You will know.”

Ms. Nandi is a pillar of the community that many residents call Fairhill-Hartranft and one of the inspirations for a new exhibition entitled “Staying Power”. The show, which opened on several green spaces on May 1st, features a series of indigenous memorials by artists for residents who have helped promote citizens in these communities where life expectancy is low, incarceration rates are high and gentrification is now displacing people.

These new monuments by Deborah Willis, Sadie Barnette, Ebony G. Patterson, Courtney Bowles and Mark Strandquist, and Black Quantum Futurism are not made of granite or bronze and are made up of outdoor sculptures and photographs, activations and in-store performances. When I visited before the opening, banners were rolled up, lights were lit, and the parks were flooded with rubble.

“This is a place to understand how residents have maintained their resilience through generations, despite the systemic forces that undermine them,” said Paul Farber, director of Monument Lab, a Philadelphia-based public art and research studio. that is dedicated to the study of history in public landscape.

Monument Lab designed and organized the exhibition together with residents and the Village of Arts and Humanities – a non-profit arts organization that runs cultural programs and manages several parks in the area.

The story of Ms. Nandi’s candy store informed at least three of the installations in “Staying Power”. Barnette has created a fantastic living room in a store window along Germantown Avenue, the neighborhood’s business corridor. It pays homage to “furnishing family living rooms” as a place of comfort and healing in times of crisis, Barnette said. Patterson created a series of banners featuring headless women on richly patterned backgrounds to honor those who cared for the community but nonetheless suffered violence and trauma.

Willis, who grew up about 25 blocks from Fairhill-Hartranft, photographed women entrepreneurs and their homes, including a baker, Tamyra Tucker, an organizer, Aisha Chambliss – and Ms. Nandi.

When artists Bowles and Strandquist pondered the idea of ​​perseverance, they took a different approach, asking, “Who’s missing?” The couple worked with five women – four of whom were previously incarcerated – to create a sculpture that would be theirs Celebrates ongoing crusade to end life sentences in Pennsylvania. The images of women appear in impressive portraits arranged around a crown-like structure while 200 lights hang over them – a memorial to the women still serving life sentences, 54 of whom are from Philadelphia.

With Bowles and Strandquist’s work representing dozens of Philadelphia women, Black Quantum Futurism, the Afro-Futurist collective founded by social practice artists Rasheedah Phillips and Camae Ayewa, hopes their memorial will capture voices from the neighborhood and beyond. The towering shape is shaped like a 7-foot grandmother’s clock and houses an oral history booth where residents can record their stories and share their wishes for the future. It’s practically a monument that listens.

Staying Power provides a platform for local voices in a different way: It encompasses a whole range of programs, performances and research initiatives – including one led by Ms. Nandi, who, as a paid curator, interviews families about their experiences with home school children during the pandemic.

It’s not uncommon for community members to be so involved in a Village-run project that has the closest parallels to the nonprofit project townhouses in Houston and the Heidelberg project in Detroit. For Farber from Monument Lab, this holistic approach to community development made the village the ideal partner to reflect on “which stories and thus which people have a say in the development of a city”.

A five-minute walk from Ms. Nandi’s house, a patchwork of green spaces with wavy, mosaic-encrusted walls and lively murals on the walls – Yoruba, Christians, Islamists, Chinese – leads to the village. More than 50 years ago Arthur Hall, a visionary teacher of West African dance and music, planted a seed here for the Ile Ife Black Humanitarian Center, which became a hub for the Black Arts movement in the late ’70s.

Back then, the green spaces around the building were vacant lots on which houses had burned down. “It was all dust, rubble, no trees,” said the village manager, Aviva Kapust, and pointed to the park that is adjacent to the main building of the organization. In 1986, Hall invited Chinese artist Lily Yeh to the neighborhood to work with his girlfriend, local bricklayer JoJo Williams, to remodel the vacant lots. She started by engaging children in the area to discuss what was missing. “They said trees,” said Kapust, “so they drew a big circle in the dirt and they made the Tree of Life sculpture.”

Real trees followed, as did local monuments – murals and sculptures made from furniture wrapped in concrete and decorated with mosaic patterns. When Hall left Ile Ife in 1988, he entrusted it to Yeh, who made it the Village of Arts and Humanities and expanded its mission to include green space development in the footprint of former homes.

Hall’s legacy and what emerged from it remains a source of strength, pride and identity in Philadelphia to this day. There is a metal plaque with his name and history on the sidewalk next to the village. “I smile every time I read it,” said Ivy Johnson, a household health and prison reform attorney – and one of the women who appears in (and worked on) Bowles and Strandquist’s memorial.

Now Johnson’s picture will also appear in one of the village’s parks and contain a recording of her voice and poems by women in prison. Johnson was imprisoned for 18 years, and poetry writing was her exit at a particularly dark time. Making art out of her experience is a form of healing, she said.

Perhaps this is what underpins “Staying Power”: the belief that access to stories in the public landscape, to the legacies of those who have embarked on a path to self-determination, can make a significant difference in the lives of residents. As exhibition co-curator Arielle Julia Brown put it, having what she calls “picky stories” is an integral part of what it means to be persistent.

With this exhibition and its work in general, the village hopes to bring about concrete changes. A number of free newspapers, published along with the show, will highlight local advocacy efforts, such as the battle to reopen a leisure center that closed in the 1980s. The organization funds community-led research into alternatives to policing and operates extermination clinics to help people clear their criminal records. The exhibition is not about “profiting from people’s stories,” said Kapust, but rather about “showcasing a series of investments in people, in actual revitalization efforts”.

Congressman Brendan Boyle, who represents the Second District of Philadelphia where the village is located, said in an email, “I welcome those willing to spend their time reducing recidivism and providing support services, that can help people change their lives. These organizations are a secondary safety net in which we all too often find those who are falling through systemic tears in our existing social safety net. “But he added,” Authentic reform can only be achieved with the commitment and leadership of state and local governments, the federal government and community organizations – all working together. “

Marc Handelman, chairman of the art and design department at Rutgers University, agrees that art cannot be as effective as legislation. “On the other hand, I am convinced that society cannot be challenged and changed without art,” he said. “What the Village of Arts and Humanities does shouldn’t even be viewed as incremental. Its size is local and the intimacy through which its work is done is profound, direct and necessary. “

For Rasheedah Phillips, who works as a full-time home ownership attorney while having half the Black Quantum Futurism in the moonlight, art and legal work can grow together. Phillips has worked with the People’s Paper Coop to pass laws preventing criminal records from being used in employment decisions and eviction records used by landlords to keep people out of housing.

With their memorial, the Black Quantum Futurism would like to give the visitors of the neighborhood the opportunity to exchange memories and dreams with their voices and thus to appreciate the oral traditions of the African diaspora. The submissions to the oral history booth are ultimately saved in an online archive.

In a city where murals were destroyed by luxury apartments, the villages have remained. “In all the years that they have been there,” said Ms. Nandi, “they were never graffitied. They weren’t torn. They weren’t sprayed. Children helped put them together. So you can literally say this is ours. I had my hands in it. I painted, I cleaned, I helped build the trees. “